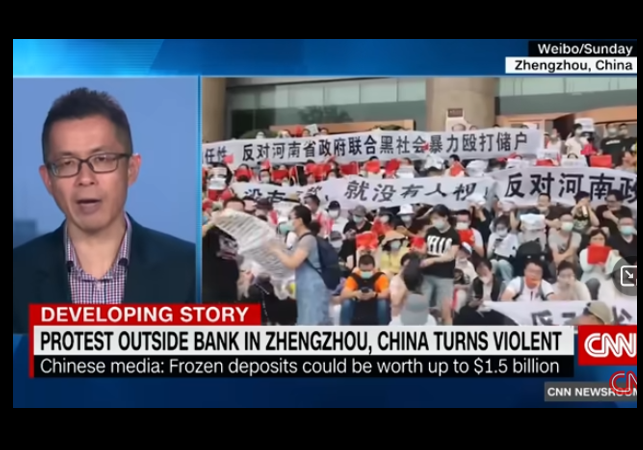 I recently reported that China had used a COVID-19 app to limit the movement of its citizens to banks in one region after three local banks had frozen accounts. This appears to have been done to prevent a bank run.

Protesters have returned to the banks, only to be attacked by China’s security forces.

This time the authorities sent in guards en masse to break up the demonstration. They beat the protesters, kicking them to the ground and shoving them onto buses — the harshest response yet to the bank depositors’ efforts to seek redress.

Photos and video of plainclothes security agents attacking the protesters were shared on Chinese social media, stirring anger over the use of force. While protest images are often quickly censored in China, the footage from Zhengzhou was still widely available on Monday, with one hashtag viewed 32 million times on Weibo, the Twitter-like service.

The protesters had gathered in front of the Zhengzhou branch of the nation’s central bank, the People’s Bank of China. Protesters interviewed by phone said that dozens of people had been sent to hospitals after being beaten.

“We came all the way to Zhengzhou to get our money back, and we didn’t want to have conflicts with anyone,” said Feng Tianyu, 31, who lives in the northern city of Harbin. “But the government sent so many people to deal with the unarmed people. We were cheated financially, beaten physically and traumatized mentally.”

Reports show the brutality of the response by the Chinese forces to over 1000 citizens, who gathered in front of their bank clamoring for their money.

The scene quickly descended into chaos, as security officers dragged protesters down the stairs and beat those who resisted, including women and the elderly, according to witnesses and social media videos.

One woman from eastern Shandong province told CNN she was pushed to the ground by two security guards, who twisted and injured her arm. A 27-year-old man from the southern city of Shenzhen, surnamed Sun, said he was kicked by seven or eight guards on the ground before being carried away. A 45-year-old man from the central city of Wuhan said his shirt was completely torn at the back during the scuffle.

Many said they were shocked by the sudden burst of violence by the security forces.

“I did not expect them to be so violent and shameless this time. There was no communication, no warning before they brutally dispersed us,” said one depositor from a metropolis outside Henan who had protested in Zhengzhou previously, and who requested CNN conceal his name due to security concerns.

Further details may be hard to come by, but it is clear there is a little trouble brewing in Big China.

Chinese authorities violently dispersed a peaceful protest by hundreds of depositors, who sought in vain to demand their life savings back from banks that have run into a deepening cash crisis.https://t.co/UCLRGWRz4h

1. Massive protest out break in Henan province，China.
More than 3000 protesters who are victim of bank financial fraud show up in capital City of Henan.
None of them can withdraw money from account now.

That’s what communists and their wannabe copy cats do.

That’s what Chinese banks do when they’re out of money. In the U.S. they just print more money.

No, they’ll limit your withdrawals too in American banks. Though they don’t like when you call the police because they’re stealing from you.

You will own nothing and you will be -happy- *silent*

And the same takeover is planned here.

There are at least 5 bills in congress that are pushing forward Digital Currency. This will destroy any remaining economic liberty remaining with the people. They are HR2211, HR296, HR5045, HR3506, and HR3638. Then there is the patent; #US 2020/0151682 A1 dated May 14, 2020, owned by Visa International for “Digital Fiat Currency” because #7. “The removal of the physical currency from circulation includes physically destroying the physical currency, the physical currency being fiat currency.”

That isn’t a patent number, but rather the number of a US patent application.

Actually, to be more accurate, US 2020/0151682 A1 is the first publication of US Patent Application number 16/678,947 titled “DIGITAL FIAT CURRENCY”, filed 11-08-2019 and assigned to Visa International Service Association, San Francisco, CA. The claims had faced a final rejection, and prosecution was reopened by the filing of an RCE (Request for Continued Examination) in May. The case is again docketed to an examiner for his examination.

Thanks for the technical note. The paragraph posted was a quote from an online document.

My major point being not whether this particular patent has or has not yet been formally approved, but that it exposes a component process of a plan that is already out there to slap a valve on your access to your own wealth, and which is eventually going to happen, even if Visa can’t manage to find a way to monetize part of it for themselves.

I know these headlines have to be short, but I thought the funds were what was being attacked by security forces.

Since the funds are frozen, they are easier to attack. Mobility is limited.

This is a long time in coming with that country. Add to their real estate development woes (robbing Peter to pay Paul), I wouldn’t be surprised that an insurrection were to occur. Not certain it will be successful, though.

So, the long running ponzi scheme is failing….

“… “I did not expect them to be so violent and shameless this time. There was no communication, no warning before they brutally dispersed us,” said one depositor from a metropolis outside Henan who had protested in Zhengzhou previously, and who requested CNN conceal his name due to security concerns. …”

But, I had been assured that covid apps would not be used to control the people, they were only for fighting a deadly disease.

FOR SOCIAL SECURITY PURPOSES ONLY. NOT FOR IDENTIFICATION.
Still got the card, biyotches.