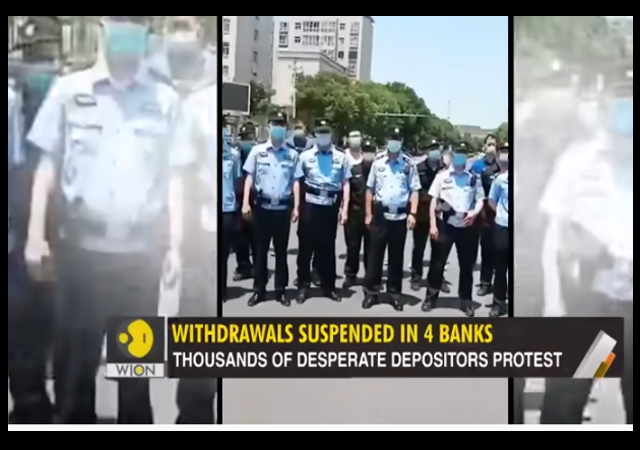 If there were any doubts that e-controlling populations based on public health matter was an evil idea, China has now dispelled them completely.

A protest planned by hundreds of bank depositors in central China seeking access to their frozen funds has been thwarted because the authorities have turned their health code apps red, several depositors told Reuters.

The depositors were planning to travel to the central province of Henan this week from across China to protest against an almost two-month block on accessing at least $178 million of deposits, which has left companies unable to pay workers and individuals unable to access savings. read more

Rights groups have warned China could use its vast COVID surveillance infrastructure to stifle dissent. Without a green code on their smartphone app, citizens lose access to public transport and spaces such as restaurants and malls, as well as the right to travel across the country.

“They are putting digital handcuffs on us,” said a depositor from Sichuan province surnamed Chen, who declined to use his full name for fear of government retribution.

The "conspiracy theorists" warned that COVID QR codes would be used as a means for surveillance and censorship.

Today, the CCP blocked a protest by switching citizens' QR codes to prevent freedom of movement.https://t.co/XzUheAumQA

One Chinese woman shared her experience:

One bank customer in Zhengzhou told BBC Chinese that her status was red even though she had never been in contact with a confirmed case, and her most recent tests showed she was negative.

She added that she was visited by health officials who asked her to stay at home and refused to explain why her status had suddenly turned red.

The change in QR codes followed reports that three banks in China’s central Henan province have frozen at least $178 million of deposits.

Yu Zhou Xin Min Sheng Village Bank, Shangcai Huimin Country Bank and Zhecheng Huanghuai Community Bank froze all deposits on April 18, with all three telling customers they were upgrading internal systems. The banks have not issued any communication on the matter since, depositors said.

None of the three banks responded to Reuters’ emails or phone calls seeking comment.

While nominally small, China’s numerous local banks have outsized significance because they lend to small and mid-sized firms so their activity can be an indicator of the health of the economy, the world’s second-biggest after the United States.

There are reports are disruptions to electronic banking.

AIt’s understood the banks with branches across the Henan and Anhui Provinces successively issued announcements in April, stating they would suspend online banking and mobile banking services due to a system upgrade.

At the same time, clients reported their electronic deposits in online accounts, mobile apps and third-party platforms could not be withdrawn.

This led to depositors rushing to local bank branches, only to be told they were unable to withdraw funds.

By late May, images emerged on Chinese social media of demonstrations at the front of numerous bank branches. Asia Markets has verified these images with local contacts.

Given China’s economic ambitions, and how much it has used money to undermine the United States, these are developments that our press should be trying to cover in more detail…rather than push the January 6th show trial.

Well duh! You can’t take out money that ain’t there. And Chinese deposits are only insured up to 2 yuan.

About 14 years ago we switched to the Dave Ramsey envelope system- keeping 6-12 months of cabbage outside of the bank-mostly because I like the eff you factor paying cash.

Lately we’ve been trying to take this a step further. Where-as we used to stock up once a month, I’m trying to just buy everything that isn’t perishable in 6 month quantities to avoid getting burned by the next shortage of _________.

Money is only useful for the goods and services you can get with it.

Oh- this hasn’t hit mainstream yet- I don’t know why because it should be obvious- About this time next year we’re probably looking at jobs numbers that make Jimmy Carter look like the best president evah….. I actually got a W2 job with biggy mc big company and heard the CEO reference the nasdaq meltdown- saying he’ll be glad to hire the talent that’s about to get laid off from the tech-opolies. He’s an idiot of course- only a moron would hire anyone working in Silicon valley right now….(our stock price reflects that he and everyone else running the company are idiots, but they have the pride flag hoisted in their backgrounds- so it’s all good). but I digress into ranting.

Stuff is gonna get real side ways in the next year or two. We aint seen anything yet.

This just makes sense Andy! And I suspect you are not the only one doing this.

This is why the Democrats want to push EVs. It was never about the environment (I think sound arguments can be made that they’re much worse), it’s about control. Most people can’t afford them so they’ll be stuck in public transportation, which makes suspending their mobility at will, as China is doing here, much easier.

I remember when people were wary of cell phones, GPS devices, and other technology. It didn’t bother me too much because we always could just turn them off. This thing, being allowed to travel and participate in society only with permission from a government-controlled app, if this ever is tried here, should be fought to the extreme by all who love freedom.

Here’s how it’s going so far…

Dissenters are smashed and therefore others shut up… they smashed the Christian florists and bakeries and now my 10 year old has to be questioned on whether she thinks she’s gay / transgender for the month of June. BTW we are keeping her out of school for a day or two because of this…. having a fight about home school.