Many of these so-called NGOs, lavishly funded by the U.S. and European governments, are themselves front organizations for terrorist groups. 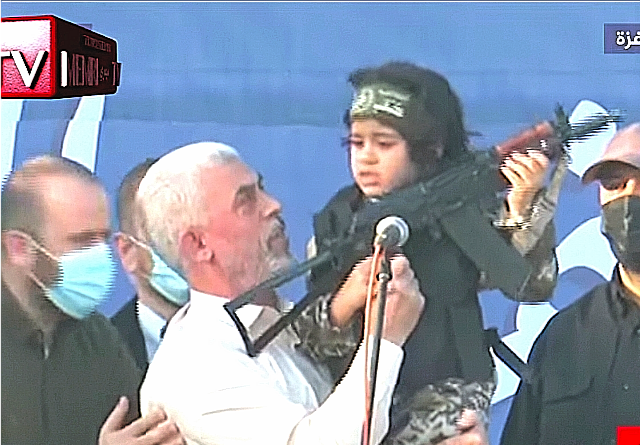 The Israeli watchdog group, NGO Monitor, has released a database exposing the use of child soldiers by Palestinian terrorist organizations. The data compiled by the Jerusalem-based watchdog shows how Palestinian NGOs, many of them funded by the U.S. and Western governments, cover up the recruitment and abuse of Palestinian teens by terrorist groups.

“Palestinian NGOs take a hypocritical approach towards children’s rights. On the one hand, they claim to champion children’s rights and allegations of their abuse feature prominently in NGO campaigns against Israel,” the NGO Monitor stated while releasing the database. “Yet, NGOs ignore the recruitment and use of Palestinian children by terrorist organizations, as well as the indoctrination of children to engage in violence,” the watchdog added.

Many of these Palestinian NGOs, which often purport to work in the area of youth and child welfare, are themselves front organizations for terrorist groups, the NGO Monitor’s research reveals.

Palestinian NGOs that claim to promote human rights agendas deny evidence of the recruitment and use of children by Palestinian terror orgs. Our new database of child combatants exposes the terror context ignored by NGOs that demonize Israel. https://t.co/xkoyPGAPUs pic.twitter.com/Kkik8yFp4l

The database is divided into two segments. One deals mainly with the acts of terror committed by Palestinian minors, and another details the Palestinian children killed in violence incited by Palestinian terrorist organizations, mainly the Gaza border riots — regularly instigated by the Islamist terror group Hamas.

The searchable database details the incident that led to the death of an individual child fighter and his affiliation with a particular terrorist outfit. It also features examples of distorted reporting done by the Palestinian NGOs to cover up the circumstances that led to the minor’s death.

These young and armed recruits belonging to Palestinian and Islamist terror groups are often portrayed as innocent bystanders or mere protesters.

One example of the minors featured in the database is Mahmoud Salah, who was wounded by IDF gunfire in 2019 when he was 15 years old. The IDF stated that Salah attempted to throw a firebomb at soldiers on Route 60. In contrast, DCI-P claimed that the youth was shot while attempting to retrieve a soccer ball. After his injury, Fatah referred to Salah as “its wounded ex-detainee son” on a poster.

Mohammad Hamayel is another minor on the list. Hamayel was killed by IDF forces while participating in clashes that included stone-throwing and firework launching. Although the Popular Front for the Liberation of Palestine (PFLP) called the 15-year-old “its comrade” on an official poster, numerous Palestinian NGOs omitted the fact that Hamayel was affiliated with the PFLP, and one even referred to the protest as “peaceful,” per NGO Monitor.

“This cynical NGO and UN campaign to demonize the IDF has whitewashed the exploitation of Palestinian teenagers for terror attacks, and also erased the victims,” Gerald Steinberg, NGO Monitor’s founder and president told The Jerusalem Post. “The process of systematically documenting the details of these heinous abuses spotlights the incitement, recruitment and training of Palestinian children for terror, and the continued silence of the self-proclaimed human rights community.

UN and government officials who support these Palestinian NGOs and the blacklist will be provided with the information that these NGOs do not provide about youth combatants, making it more difficult for them to justify their support in the future,” Steinberg said. “Our objective is to stop the cynical exploitation of the Children and Armed Conflict (CAAC) framework and restore its moral foundation.”

Western reporters and media outlets often pick the fictitious reports submitted by the Palestinian NGOs as an actual description of the incident. Arab and Muslim countries use the campaign mounted by these terror-linked NGOs to smear Israel at the United Nations and other international forums.

Many of the NGOs that repeatedly appear in the databank — namely, Defense for Children International – Palestine (DCI-P),  Palestinian Center for Human Rights (PCHR), Al-Haq — have known ties to the Popular Front for the Liberation of Palestine (PFLP), a U.S. and EU-designated terrorist group.

The mainstream media and Western governments have largely ignored the use of Palestinian children as cannon fodder by terrorist groups. The gullible Western media continues to treat their reports as credible, and the Western governments continue funding them. The European Union, and European countries, especially Germany, are among the top financial backers of these terror-linked NGOs, the NGO Monitor’s research shows.

I”m sure this story will be picked up by the MSM. And there will be protests across US college campuses by the people who care about the world.

From the article: “The European Union, and European countries, especially Germany, are among the top financial backers of these terror-linked NGOs …”

There’s a connection with certain antisemitic actions and attitudes that were on horrible display in the past, especially before and during World War 2. The more things change, the more they stay the same.
.

When the Europeans have absolutely nothing else left, they will still have their antisemitism.

It is only a matter of time, Europe will end up 99.99% Muslim, their average IQ will fall to 85 or lower, and their culture will only continue in a few other countries.

For all leftists, either before or after birth, all children are tools to be used as they see fit.

Palestinians are lower than dog poo. While I know there is an exception or two, most have so much hatred in their heart they are incapable of rational thought.

The Israelis need to stop feeding and watering the bastards.