“The PFLP operates a network of “humanitarian” institutions, which are essential to the terrorist organization’s activities” 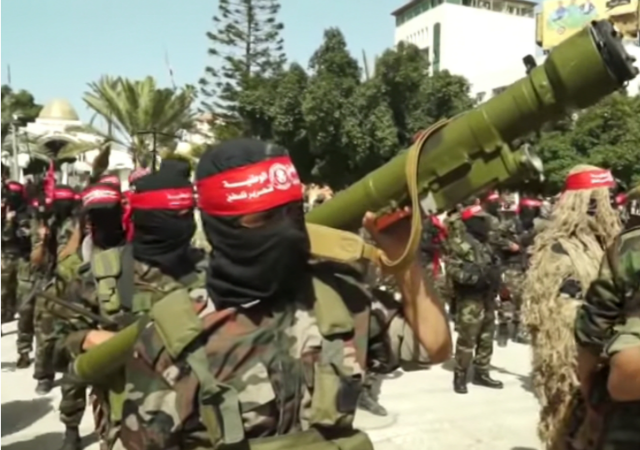 A confidential dossier published on Monday by The Washington Free Beacon (WFP) reveals an elaborate network of NGOs and charities run as front groups for the Popular Front for the Liberation of Palestine (PFLP), a U.S.-designated terrorist group.

The dossier deals with six PFLP-linked NGOs which Israel recently designated as “terrorist organizations.” The six blacklisted NGOs are Al-Haq, Addameer, Defence for Children International-Palestine, the Bisan Center, the Union of Palestinian Women’s Committees, and the Union of Agricultural Work Committees. These benignly-named NGOs are in fact the “central source” of funding for the terrorist group PFLP and have received “large sums of money from European countries and international organisations,” the Israeli defense ministry disclosed.

The dossier, which first appeared in the WFP and bears the logo of Israel’s domestic intelligence agency Shin Bet, has not been authenticated by the Israeli government.

The Israeli authorities did not verify the dossier as the “evidence Israel gathered about these Palestinian nonprofits is connected to the litigation, barring Israel from publicly releasing the information until the case has concluded,” the news website noted.

Reviewing the 74-page dossier for the WFP, Adam Kredo and Matthew Foldi, noted that the documents “exposes an alleged network of PFLP members and associates with senior roles at the organizations, which claim to provide humanitarian services to the Palestinian people.”

The dossier “provides the firmest evidence to date that the Popular Front for the Liberation of Palestine (PFLP), a U.S.- and E.U.-designated terrorist group responsible for several airplane hijackings throughout the 1960s and ’70s, among other atrocities, operates a network of nonprofit groups to embezzle millions of dollars in funding from the European Union and international nongovernmental organizations (NGOs),” the WFP article added.

According to the document, PFLP front groups received “millions of euros” from the EU and governmental assistance organization in Europe.” (Page 12)

The detailed dossier also shows how the PFLP deceived Western governments into financing its terrorist infrastructure. “The findings of the investigation reveal that part of the European funding has been diverted to the PFLP through fraud, misrepresentation, counterfeit, theft, procurement, fictitious projects and more. The mechanism was operated by the PFLP and designated to divert donation funds of considerable scale to the PFLP and to activities against Israel, the document said.” (Page 15)

The NGOs are a key source of funding for the Marxist terrorist group. “The PFLP operates a network of “humanitarian” institutions, which are essential to the terrorist organization’s activities,” the dossier found. (Page 20)

The conclusions of the reported dossier is consistent with Legal Insurrection’s coverage highlighting the unholy nexus between the NGOs and Palestinian terrorist groups. As early as May 2020, we reported that “European aid worth millions of euros going to Palestinian charities and “civil society organizations” was ending up in the coffers of internationally designated terrorist groups,” specifically mentioning two PFLP-linked NGOs added to the latest Israeli anti-terror blacklist.

The Jerusalem-based watchdog NGO Monitor, which we often quoted in our coverage, has uncovered direct ties between at least 70 operative of the PFLP terror group and several of the banned NGOs.

“Attempts to dismiss the evidence systematically linking the PFLP to a network of NGOs as the actions of a few individuals is deceitful,” founder and president of the NGO Monitor, Professor Gerald M. Steinberg, wrote this week in the Fathom Journal. “Open-source evidence published by NGO Monitor shows direct links between more than 70 PFLP officials and many of the NGOs,” he added.

The Israeli action against the PFLP-linked NGOs has angered the Biden White House and many prominent members of the Democratic Party.

The Biden State Department described the Israeli move to ban the NGOs run by the PFLP Marxist terrorist group as an assault on “human rights” and “fundamental freedoms.”

Hope you didn’t spend more than a couple of minutes on that one.

So you can fund terrorism, directly, indirectly, surreptitiously, covertly, stealthily and 7 ways from Sunday.

So called Palestinians deserve what they advocate for Israel and Jews. There should not be any mercy.

When we run out of capital letters for acronyms, there will be world peace.

Not surprising, I’d bet most Islamic charities directly or indirectly fund terrorism. Paying the mujahideen is after all one of the permitted uses for zakat.

Palestinian organizations, together with BLM, work slowly and deliberately to infiltrate mainstream organizations with the goal of moving US to Marxism and turning Israel to dust.