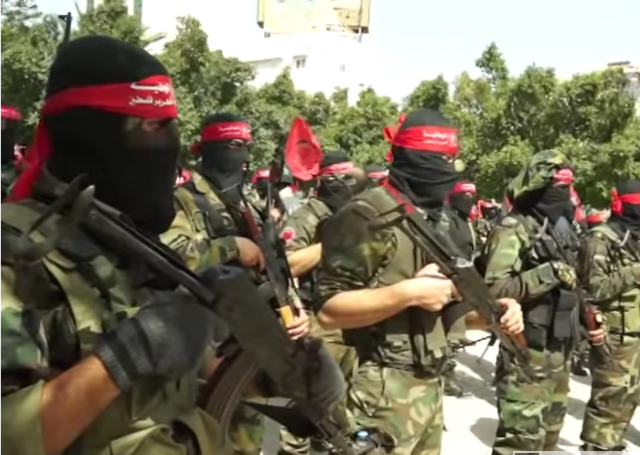 The research done by the Jerusalem-based watchdog group exposed eight NGOs as having operational ties to the Popular Front for the Liberation of Palestine (PFLP), a U.S. and EU-designated terrorist group.

Revealing large-scale foreign founding for these terror-linked groups, NGO Monitor reported: “[S]taff members, founders, board members, general assembly members, and senior staff members from a number of NGOs have ties to the PFLP terror group. Some of these individuals are employed in financial positions at the NGOs, calling into question funding oversight by the EU, the UN, European governments and other donors, and increasing the risk of diversion of public funds to an internationally designated terrorist group.”

In a statement released this week, the NGO Monitor named the charities and human rights groups acting as a front for the PFLP terrorist group:

Founded by George Habash in 1967, the PFLP is a Palestinian, secular, Marxist-Leninist terror group, originally supported by the Soviet Union and China. The PFLP is designated as a terrorist organization by governments around the world, including the US, EU, Canada, and Israel.

Since its inception, the terror group has been involved in suicide bombings, shootings, and assassinations, among other attacks targeting civilians. The group was well-known for hijacking commercial airlines in the 1960s and 1970s, involving thousands of civilians in Europe, the Middle East, and Africa, and is responsible for countless deaths and injuries. (…)

Another way the PFLP attempts to gain legitimacy is by co-opting the discourse of human rights and international law. The terrorist group gains a “halo,” where outside observers associate the terror group with positive progressive values instead of violence. Moreover, the rights-based rhetoric serves to justify attacks against civilians, obscuring of its ultimate goal – i.e. the elimination of Israel.

For example, one of the pillars of the PFLP platform is “Defense of human rights and the struggle for the release of prisoners and political prisoners.” Notably, for the PFLP, “human rights” is consistent with referring to terrorists as “political prisoners.” Other pillars speak of the importance of Palestinian youth, alongside “stepping up the development of forms of revolutionary violence against the Zionist enemy.”

The PFLP is not the only terrorist organization carrying out activities under the garb of European and Western-funded NGOs. The Islamist terror group Hamas is also running NGOs. Some of the convicted terrorists working for Palestinian NGOs include PFLP hijacker Leila Khaled, convicted PFLP terrorist Shawan Jabarin, “former” top Hamas operative Muhammad Sawalha.

European governments, especially Germany, are among the top patrons for the Palestinian NGOs, many of them affiliated with terrorist groups and openly inciting hate and violence against Jews and the State of Israel, the research shows.

“The German federal government provides millions of euros to political advocacy NGOs in Israel and the Palestinian Authority, through a variety of frameworks,” NGO Monitor reported in a November 2019 study. “German federal funding is allocated to, among others, organizations that promote anti-Israel BDS (boycott, divestment, and sanctions) and ‘lawfare’ campaigns, anti-Zionism, a ‘one-state’ vision, antisemitism, and violence.”

With Egypt and Arab Gulf state abandoning the terror-ridden “Palestinian cause,” as evident by their response to President Donald Trump’s peace plan, Europe is emerging as the biggest sponsor of Palestinian institutions and groups, most of them intimately tied to Islamic and Arab terrorist groups. Europe’s open borders policy has already opened up the continent to the activities of terrorist groups like Hamas and Hezbollah. Mosques in Germany are being used for recruitment and fundraising for Hezbollah, German intelligence agency BfV recently revealed. It can not be in Europe’s self-interest to keep rearing these Arab and Islamic terrorist outfits and their front groups.

The Links between pro-BDS groups and terrorist organizations

The European Union is a criminal enterprise.

Without Britain, the days of governing pedophiles in Brussels are in their days. So is merkel.

without Britain in the EU, the days of the pedophiles governing in Brussels are numbered. So are merkel’s.

notamemberofanyorganizedpolicital in reply to TheFineReport.com. | January 31, 2020 at 4:24 pm

“No surprise, no surprise at all from the E.U.”

The E.U. has been for a few decades nothing more than a 4th German Reich!

Today is Brexit Day – The U.K Formally Departs The European Union at 11:00pm…

The Friendly Grizzly in reply to notamemberofanyorganizedpolicital. | January 31, 2020 at 5:33 pm

Yes. And, they didn’t even need V rockets or Zyklon B.

Anyone paying attention is not surprised by this.

Guess they need to hold up aid till they understand the corruption behind it.

Trying to convince the governments of these countries to stop this nefarious funding is a waste of time. They know exactly what they’re doing. NGO Monitor should seek the expertise of Sharat HaDin and the Lawfare Project to ascertain whether appropriate grounds exist to commence lawsuits against these cgovernments to stop the funding.

Trying to convince the governments of these countries to stop this nefarious funding is a waste of time. They know exactly what they’re doing. NGO Monitor should seek the expertise of Sharat HaDin and the Lawfare Project to ascertain whether appropriate grounds exist to commence lawsuits against these cgovernments to stop the funding.