Gascón’s prosecutors are mad that he won’t let them do their jobs. Courts agree with the prosecutors, but Gascón is taking it to the California Supreme Court. 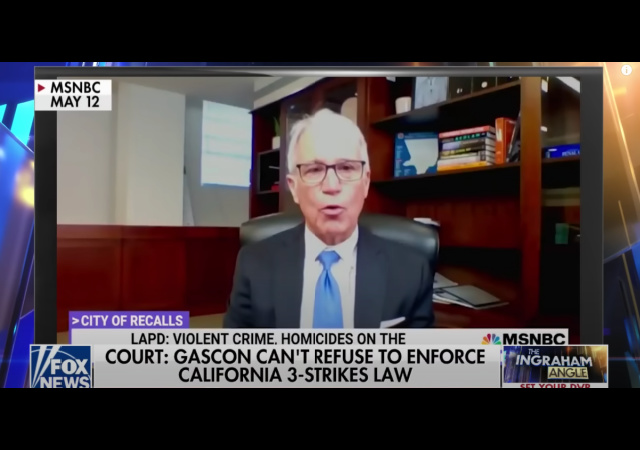 I guess Los Angeles District Attorney George Gascón knows his future is bleak in the city because I can already hear the screams from the taxpayers.

Gascón’s prosecutors sued him so they could “charge repeat offenders to the fullest extent of the law.” The DA wants to appeal in front of the California Supreme Court:

In June, the Second Appellate District Court upheld portions of a lower court’s injunction that said Gascón cannot refuse to charge three-strike cases, which can dramatically increase prison sentences for some of the most serious repeat offenders.

Gascón is hoping to have the court’s order overturned, arguing that it is “draconian,” creates “a dangerous precedent” and amounts to “taking the charging decision out of a prosecutor’s hands.”

“The district attorney overstates his authority,” the Second Appellate District ruling reads. “He is an elected official who must comply with the law, not a sovereign with absolute, unreviewable discretion.”

Gascón has to know his chances are slim in front of the California Supreme Court, but he retained Neal Katyal, the nation’s highest-paid lawyer.

The taxpayers are going to pay Katyal’s bill, and it could backfire on Gascón:

“That’s high, but appellate experts like him are in high demand,” said Neama Rahmani, a former federal prosecutor and Los Angeles-based trial attorney.

Katyal is one of the most accomplished lawyers in the country. He has argued before the U.S. Supreme Court dozens of times, according to his Georgetown bio. He also faced a storm of criticism in late 2020 after defending two large corporations in a child slavery lawsuit that reached the Supreme Court.

But the expenditure could amount to a waste of taxpayers’ money if Gascón fails in front of the Supreme Court.

“It’s unfortunate that Gascón is spending so much time and money litigating against his own front-line prosecutors and challenging California’s Three Strikes law, which is well-established and supported by the majority of California voters,” he said. “Especially as he faces a likely recall.”

Leslie has done an excellent job documenting Los Angeles’s efforts to recall Gascón, a DA backed by George Soros. The first recall failed, but this second one might just work.

Gascón has come under fire for his soft approach on crime, which has led to a rise in crime in Los Angeles. Let’s not forget that he barely punished a child molester.

Gascón caused outrage when he recently ended the unit that notifies victims when their assailant’s parole hearing.

Voters in big cities continue to be stunned when “progressive” elected officials turn out to be as incompetent and mendacious as their racist, fascist, deplorable flyover adversaries tell them they’re going to be.

Don’t make the mistake of thinking DAs like George Gascón, Chesa Boudin, or Alvin Bragg are incompetent. They’re achieving exactly the results they set out to achieve. Indeed, they campaigned on doing exactly what they are doing. Destroying America from inside the system.

The amazing thing is even after these anti-American communists told the voters exactly who they are, the voters elected them anyway. Now the voters are finding out they don’t like what they asked for.

It reminds me of a girl in a party of four who sat down in a Brazilian BBQ restaurant. She was loud enough so the whole restaurant could hear her. She was so excited to be there since she heard such great things about the place. Until her waiter showed up to take their drink orders and she asked him for their vegetarian menu. She didn’t eat meat.

The waiter tried to tell her they didn’t have one. Her first cue should have been all the servers walking around with skewers of meat. But she kept arguing with him that she needed a vegetarian menu since she didn’t eat meat.

All eyes are on this table now. You could tell the other members of her party were thoroughly embarrassed.

Lesson? If you don’t want to get meat, don’t make a reservation at a Brazilian BBQ restaurant.

If you don’t want out-of-control crime, don’t vote for a DA that campaigns on platform of refusing to prosecute criminals.

Fortunately at the municipal, county, and state level I can vote with my feet and get far away from these idiot voters who are stunned to find out they get exactly the results guaranteed by the policies they voted for.

Not at the national level, though. I want to slap people who voted for this geriatric imbecile who promised to end fossil fuels, period, who now find out they don’t like high gas prices.

TDS is an incurable disease. High gas prices have no effect. Hopefully, Republicans do not have to learn this again.

Maybe Democrat voters don’t really like living with the results of Democrat policies.

They appear to be voting with their feet as they had a negative net growth of residents last year to the tune of 266,000 and 265 companies have relocated since 2018.

Wow … you have district attorneys that are suing to NOT do their job. That’s just beyond sick and there are still people stupid enough to support this.

Yep. They are called Democrats.

Who do they think they are? Schoolteachers?

Wow … you have district attorneys that are suing to NOT do their job.

Nothing new. Barky sued Arizona in order to NOT have the federal government be forced to enforce federal law (regarding the presence of illegals). The SCOTUS sided with Barky (and Mexico) against America.

The three strikes law takes into account that after the first conviction, about 50% continue in crime. This goes to about 85% after a second conviction. Three strikes is a career criminal. The left squealed when a two-time loser stole a piece of pizza setting off three strikes. It wasn’t the pizza slice… it was the career of theft that continued to that point. I guess the Left is so used to theft of others… professional courtesy comes into play.