“We have a DA who completely lacks any transparency, who’s sending a spokesperson on the news to say things that just aren’t true.” 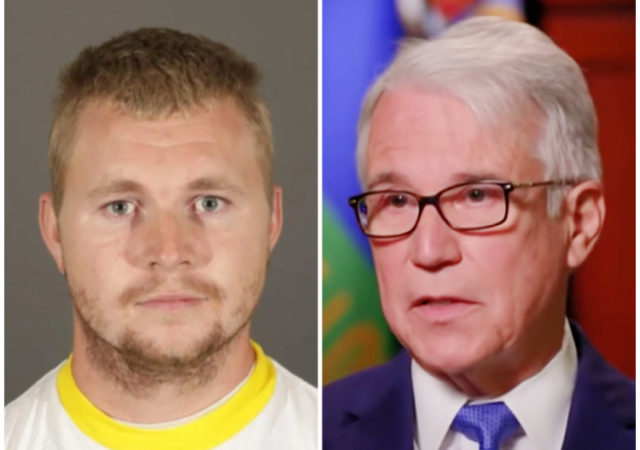 James Tubbs, who now goes by Hannah, claimed to be transgender once prosecutors took him into custody for molesting a 10-year-old girl in a Denny’s restroom in 2014. He was two weeks from turning 18.

Gascón decided to try Tubbs in juvenile court instead of adult court. The judge could only sentence Tubbs to two years in a juvenile detention center. Since he’s now a female the authorities house him in the female section but keep him isolated.

I do not believe he is transgender at all.

Fox released explosive phone calls Tubbs made in jail before his sentencing. He made horrific remarks about the victim. He bragged about how he would get a light sentence and not have to register as a sex offender.

Tubbs told another person if they send him to jail he would get a sex change surgery so he could go to the women’s facility.

Gascón said he did not know about the phone calls, which took place in November, before Fox News published the details:

Hatami, who is also a veteran prosecutor of child abuse crimes, appeared on America’s Newsroom and told the truth:

Alex Bastian, Gascon’s special adviser, said on “America’s Newsroom” earlier in the day that “the content of these jail calls was something that we did not know about” until Fox News’ Bill Melugin asked for comment on the alarming statements Tubbs made in calls with her father between November and January.

“That statement that Alex Bastian made is completely untrue,” Hatami said. “And it is a slap in the face to the victim in this case.”

He pointed to a Los Angeles Times report in which Bastian went on the record to state that senior aides in Gascon’s office knew about the calls.

Hatami said that he has seen emails that show discussion of the calls circulated at the highest levels of Gascon’s office – and that they should be available under California’s open records laws.

“I’ve seen emails, emails that show that George Gascon and his chain of command knew about those jail calls well before Bill Melugin published them,” Hatami said. “We have a DA who completely lacks any transparency, who’s sending a spokesperson on the news to say things that just aren’t true.”

One is wearing a tie.

That’s the only way to tell them apart.

Of course he did. He also didn’t care or even worse is so in the bag on the trans issue that he actively did these things to support this person.

“Democracies fragment and lose their sense of direction once the line between reality and unreality, and truth and untruth, is lost. While unreality is the worst possible organizing principle for a society on a collision course with catastrophe, the truth, and those who seek to verify and safeguard it, can no longer keep pace with the lie. For the most part, the children of the lie remain silent and submissive, and willing to allow ignored realities to avenge themselves in the ugliest of ways. We have been seduced and shepherded into a shared delusion in which there is more promise in the lie than the truth.”

Right up till the last bit I thought that was a Mark Zuckerberg spiel for his Metaverse. Gag.

The whole reason George Soros got him elected is to destabilize our society, so that the globalists can replace the USA with a globalist, collectivist country. So far, he’s doing a great job.

Thought exercise: if someone from outside our country tried to destroy the U S A, what would we do to them?

WHO says he was ‘elected’? What voting machines were in place to rig the results??

Ask ANYONE who lives in Los Angeles: did you or anyone you know vote for this clown? No one will able to answer ‘yes’.

To be clear, Tubbs didn’t decide to ‘turn’ trans until he suddenly did so when he was arrested in 2019, six years after he raped a 10 year old girl. This wasn’t a whim. It was a well planned scam.

In fact, he is on tape coaching his family to call him “she” at the trial and discussing the tactic of going trans in order to stay off the sexual predator registry if convicted.

Now he will be confined in a female juvenile facility (at age 26). What could possibly go wrong?

Then fine. Let’s go the whole trans route with Tubbs. Castrate him and give him a fake vagina. Make him take female hormones to develop breasts and other female characteristics. He wants to be a woman? Then he needs to be accommodated.

And if he refuses to undergo the procedure(s), then transfer his sorry ass out of the female juvenile facility into the appropriate adult prison facility and let him serve out his sentence there.

This gascon is a true popinjay.

True, but entirely too mild a rebuke. He is an evil person who also happens to be a popinjay.

Oh, forgive my bon mot. Popinjay is a close synonym for gascon. Here you go- He be one mudderfurka.

When you work with these DA you know exactly how tuned in they are before they do something like this.

That’s why more than 9 of 10 Los Angeles prosecutors are supporting an effort to boot him.

Hannah. That’s funny right there. If he’s a Hannah, I’ll eat my hat. He’s even got a beard for crying out loud.

Why do smirking liars keep getting elected? Strange. I guess the US public values apparent confidence above anything else.