China Ramps Up Sand Dredging In Taiwanese Waters, as Beijing Wages War on Environment Across the Globe

China Ramps Up Sand Dredging In Taiwanese Waters, as Beijing Wages War on Environment Across the Globe

The South China Morning Post: “China has adopted a more aggressive military posture towards Taiwan, holding more combat-readiness drills near the self-ruled island since the beginning of the year.” 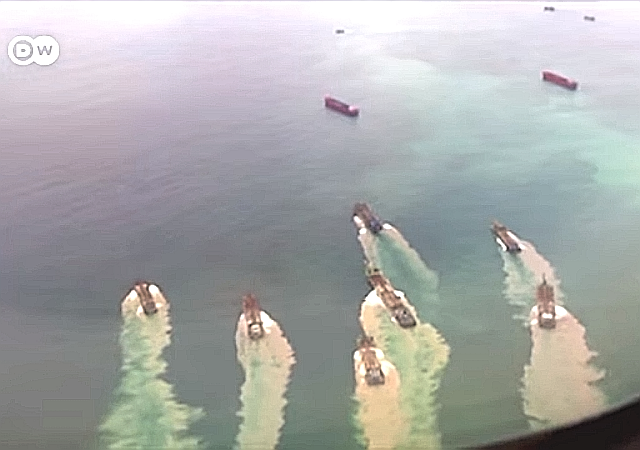 While the political elites in Washington and Brussels push for ever more radical policies that devastate West’s agriculture, economy and industry, Communist China is waging an unfettered war on environment on a global scale.

In latest move, China is weaponizing massive sand-dredgers to carve up the coast of Taiwan, the island nation that Beijing wants to annex.

According to media reports, Chinese dredgers are sneaking into Taiwan-controlled waters and carrying away tons of sand off the coast of the country. The illegal Chinese operation threatens island nation’s existence and maritime life in the region.

“China is increasing its dredging of sand in the islands’ waters. It’s a devious activity that gets Beijing much-needed sand—and presents Taiwan with large expenses and maritime degradation,” the DC-based journal Foreign Policy reports in its latest edition.

“From China’s point of view, however, harassing Taiwan over sand is a double win; it grabs a needed resource and puts an extra burden on Taipei, forcing Taiwan to divert vital financial and military resources to its coast guard,” the Foreign Policy added.

Besides its conventional use in infrastructure and industry, the sand from the ocean floor could be a key ingredient for the batteries of the future. “Sand is on its way to becoming more crucial. This month, a Finnish company pioneered a sand-powered energy storage system. With renewable energy dependent on the weather, such storage systems can ease the world’s urgently needed transition to renewable energy,” the policy journal noted.

Meanwhile, the Chinese People’s Liberation Army is scaling up its war games near to shores of Taiwan. “Mainland China has adopted a more aggressive military posture towards Taiwan, holding more combat-readiness drills near the self-ruled island since the beginning of the year,” The South China Morning Post reported Sunday citing defense analysists.

The Hong Kong-based daily added that the “Chinese Eastern Theatre Command of the People’s Liberation Army conducted several large-scale joint combat-readiness exercises in the waters and airspace around Taiwan on July 8.”

The Chinese expansionism is not limited to the Strait of Formosa or the South China Sea, Beijing is sending massive fishing fleets to exploit the Oceans from the coast of Africa to the shores of South America.

“China’s vast fishing fleet, by far the world’s largest, has been overfishing seas much further from the world’s gaze than the islands known for their giant tortoises and iguanas,” UK daily The Guardian reported August 2020. “From West Africa’s Gulf of Guinea to the Korean peninsula, the fleet has moved into the waters of other countries – switching off transponders to avoid detection, depleting fish stocks and threatening food security for often poor coastal communities.”

The impoverished continent of Africa is also in China’s crosshairs. “Small-scale fishermen on Madagascar’s east coast are disturbed by the growing presence of Chinese fishing trawlers in the island nation’s waters,” the security journal African Defense Forum reported November 2021.

“In the last several years, at least 14 Chinese industrial vessels have likely fished in Madagascar’s waters, according to an analysis by OceanMind, a United Kingdom-based nonprofit organization that specializes in marine compliance and fisheries management,” the periodical noted.

In Africa, China seeks more than just maritime resources. Beijing loaned around $160 billion to 43 African governments between 2000-2020. These massive credits give the Communist giant access to continent’s untapped natural resources and agricultural land. Africa accounts for some 60 percent of the globe’s arable land. The ‘debt-trap,‘ created by these unsustainable loans, make Africa vulnerable to Chinese exploitation.

Taiwan needs to lay mines in the sand.

Tibet was prelude. The armed conflicts on India’s border, too.

Better for them if they laid land mines in DC and in Delaware.

Biden is squarely in the pocket of Xi.

Looks like China is proving the truth of the old joke.
Commies got put in charge of the Gobi Desert, and now they have a shortage of sand.

But the Paris Climate Accords….!

That only applies to white countries.

At least China is colonizing the marine sphere, not the atmosphere.

I doubt China is going to all that trouble just to get sand. More likely, I bet it has something to do with allowing ships with deeper hulls to get closer to shore… perhaps ships carrying landing craft?

Invading (forget holding and subsequently running) Taiwan would cost China tremendously militarily. Taiwan has had nothing to do for the past five decades but prepare for that, their defenses are pretty strong for a nation that size. Amphibious invasions are not easy to begin with, and China’s navy is terrible, Taiwan’s geography for an invader is terrible. China’s navy would be decimated and they’d need at least half their entire army for an invasion, they’d lose too many troops to do anything substantial afterward. Taiwan doesn’t have giant wide beaches like Normandy to land supplies. Back in WWII, we had planned out an invasion of that place (controlled by Japan) to get to Japan. That planned invasion was double the size of what we did in Normandy, it would have been a nightmare.

Also, the world would condemn China at least or more than it did with Russia in Ukraine. There is no upside for China for invading. It relies on imports from the rest of the planet for its basic survival. More than Russia does.

I used to think China was a serious, offensive, military threat. It is a threat, but the more I’ve read about them lately, I cannot see them ever invading Taiwan.

Glad to see someone else gets it. China is not going to invade Taiwan. The cost is way too high for an uncertain outcome.

There is little reward for an actual invasion, *but* there has been and still is a substantial reward for China to bluff that result. Terrified Taiwan voters and legislators are willing to ‘feed the gator’ in the hopes that they will be eaten last, not realizing that the gator is not in any position to bite without getting its jaws torn off.

Surely you jest. China realizes we have a dottering old eunuch in the White House who is in their pocket anyway. When the Ukraine problem abates some they will invade Taiwan and we will do nothing about it.

But they make excellent bullies and loan sharks!

They do that in the Philippines also. China has stolen hundreds and hundreds of tons of sand offshore and even right on the beaches.

They are not dredging sand, they are dumping spoil. Something tells me an invasion tunnel is being prepared.

You think they’re building an underwater tunnel from China mainland to Taiwan, for and invasion.

Where do you buy the stuff you’re smoking?

China has a foothold in America and didn’t have to do a beach landing in the swamp. They just made an investment with money we gave them.

The ChiComs know Biden is no match for Winnie the Pooh.

Biden would be buying oil from China if they had any.

Does Taiwan not have naval vessels? How the hell can Chinese ships carry out such an operation, unmolested by the Taiwanese Navy and Air Force?