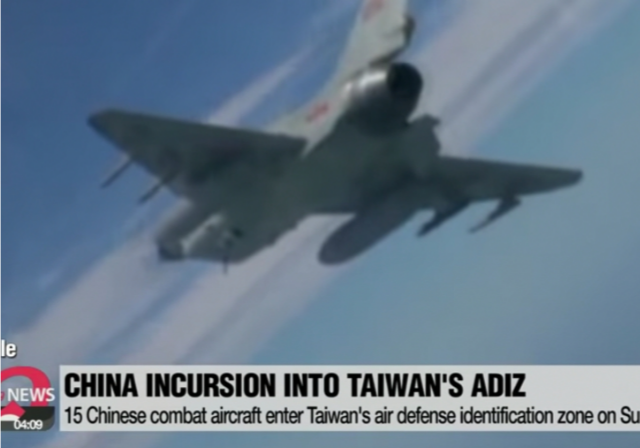 Taiwan on Monday reported the largest incursion since January by China’s air force in its air defence zone, with the island’s defence ministry saying Taiwanese fighters scrambled to warn away 30 aircraft in the latest uptick in tensions.

Taiwan, which China claims as its own territory, has complained for the past two years or so of repeated missions by China’s air force near the democratically governed island, often in the southwestern part of its air defence identification zone, or ADIZ, close to the Taiwan-controlled Pratas Islands.

Taiwan sent combat aircraft to warn away the Chinese aircraft, while missile systems were deployed to monitor them, the ministry said.

It was the largest incursion since Taiwan reported 39 Chinese aircraft in its ADIZ on Jan. 23.

Following Russia’s war on Ukraine, the Taiwanese government fears a Chinese invasion of their sovereign island nation. According to Taiwan’s Ministry of Defense, Beijing could launch a “full-scale invasion” as early as 2025.

While President Biden sleepwalks from one geopolitical disaster to another, China is forging a military alliance with anti-U.S. regimes like Russia and Iran.

Last week, Chinese and Russian bombers carried out a joint drill near Japan as President Biden was addressed at a meeting of the Quad nations in Tokyo. (Quad is a U.S.-led four-nation alliance comprising Australia, Japan, and India. In 2017, the bloc was revived by President Donald Trump to address China’s growing military hostility in the region.) Both China and Russia have border disputes with Japan.

In response, our Commander in Chief said, “I still remember talking with Beau when I was driving semi, and…”

The world has lost all respect for us. We are no longer deterrent to anyone.

I understand what you are saying, but, at the same time am relieved we are no longer – apparently – the world’s police force.

This is a bit different. We are in a de facto war with China and Taiwan is a crucial strategic asset for both nations. China knows this and wants to jump on it while they have a chance.

Better that than the alternative

As bad as Russian military forces may be doing, I think China may be biting off far more than it can chew.

Europe started WW1, WW2 and is trying to start WW3. And the Ukraine war is the hard stop for the US as guarantor of world trade. From now on America will have to decide it has a vested interest before getting involved.

Not only has the world lost any and all respect for us the Western powers that were so grateful and happy after Biden defeated Trump and “won the election” now consider Biden and the United States to be a joke. A bad joke. And the tyrants of the world know it also. So don’t expect the CCP of backing down. They know Biden has nothing. Don’t expect Iran to stop developing an atomic weapon. They know Joe has nothing. Don’t expect Russia to back down. They amply know that Joe has nothing in response.

Welcome to the New World Order!

Isn’t it amazing how the leftists running our government give the world to fascists, but turn the forces of government against YOU AND I?

Biden admin will meet this with all of the careful planning and execution of the Afghanistan efforts.

Remember to point this out when when you hear someone say re Trump vs Biden that the world is not laughing at us.

This is what happens when you allow a corrupt, grifting, senile mental retard to steal a presidential election.

But hey! No mean tweets!

This is all our fault, for chanting “Fuck Joe Biden.”
China saw that nothing happened to us when we did it,
and it gave them Ideas.

Does Taiwan have extensive anti-air and anti-ship systems? If not, why not?

Do they have any variant of Iron Dome?

The aircraft mix defines the purpose. This is nothing but an intelligence collection flight.

if so inclined, cannot see why the chinese would launch some sort of half-hearted attack as putin did in ukraine–why?–there is no military force left that could interdict/prevent a major chinese attack against taiwan–while we might have a battle group (or two) in the vicinity it is questionable whether they could defend themselves from an all-out attack by aircraft / missiles or both– let alone interdict a major assault against taiwan–if the chinese do attack, could easily escalate to a nuke exchange (be it tactically / strategically) to interdict the attack / eliminate the defense