“This Administration is more concerned with political narratives and agendas than with victims and prosecuting violent crime,” 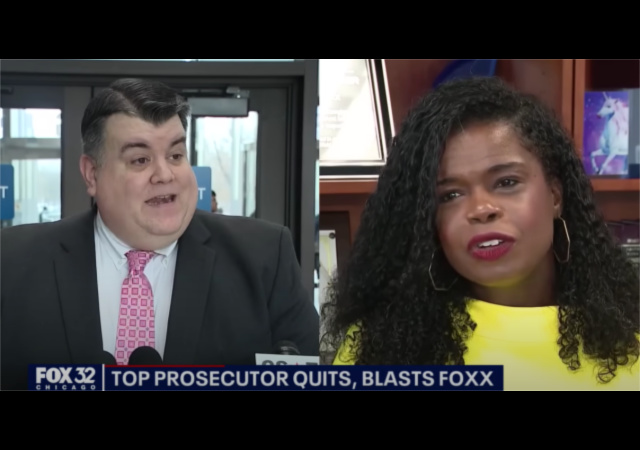 Foxx has been in a negative spotlight since the whole Jussie Smollett fiasco. Many people have left the office, leaving it short-staffed and unable to function.

Foxx said her office had lost 235 people, including attorneys and other employees, since July 2021.

James Murphy, a veteran assistant state’s attorney, resigned and slammed Foxx in his resignation letter in what might be the domino that begins her fall:

A 25-year veteran prosecutor issued a stinging rebuke of Cook County State’s Attorney Kim Foxx in a letter announcing his resignation Friday, slamming his now former boss for being “more concerned with political narratives and agendas than with victims and prosecuting violent crime.”

Assistant State’s Attorney James Murphy described an understaffed office in turmoil in his email to colleagues, saying, “I cannot continue to work for an Administration I no longer respect.”

“I would love to continue to fight for the victims of crime and to continue to stand with each of you, especially in the face of the overwhelming crime that is crippling our communities,” Murphy wrote. “However, I can no longer work for this Administration. I have zero confidence in their leadership.”

Murphy, who could not be reached directly for comment, zeroed in on many of the issues that have made Foxx a target of opponents who argue she’s gone easy on some accused of violent crimes, as carjackings and gun violence have risen in the Chicago area.

Murphy wrote that he first started thinking about leaving the office early in 2021 with Foxx’s involvement in the passage of the SAFE-T Act, a wide-ranging law that aims to reform the state’s approach to criminal justice, including by narrowing the definition of who can be charged with first-degree murder.

The previous law did not include the “death of a person.”

The change in first-degree murder is important because Murphy brings up the case where he could only file weapons charges against Travis Andrews and not for the murder of Melinda Crump.

The prosecutors originally charged Andrews with Crump’s murder because he allegedly started the gunfight that caused her death. The bullet that killed her came from the unknown person Andrews shot at.

Foxx mentioned the case to Murphy during a meeting not because of her disdain for the newly written law but because of the headlines:

“The State’s Attorney voiced her concern with the headline and the heat she was getting from her backers and never voiced any concern over the fact that this woman was shot and killed simply walking to the store,” Murphy wrote.

“That is what is wrong with this Administration. I’ve seen it day after day. How many mass shootings do there have to be before something is done? This Administration is more concerned with political narratives and agendas than with victims and prosecuting violent crime,” he wrote.

It’s so funny. On July 25, The Chicago Tribune interviewed Foxx about the troubles in her office. Of course, Foxx didn’t provide specifics, and the Tribune didn’t interview anyone about why so many people have left.

No Justice, no peace. Literally.

Not mutually exclusive, that.

Mr Murphy is a brave man to go public. Kim Foxx has some dangerous backers, much worse than the criminals that she is busy releasing….

The foolish ideological antics of Fox aside…does anyone else agree that the photo of Murphy makes him look a villain in a Dick Tracy cartoon?

The position of the camera and the tilt of his head really didn’t do the man any favors for this photo. I’m sure he’s a good person and as ethical a public servant as one can expect in Chicago.

Please, a question that has niggled at me for years has just been answered.
“Whatever happened to Bob’s Big Boy when he abandoned the restaurant business?”

To these DA’s and other leftists it is a feature that so many sensible people quit. It helps them stack the office with all leftists.

I want to see the sex video of these two.

Just curious, the Safe T Act uses “he or she” exclusively. Does that mean if I indentify as “xhei” or something else that I can commit murder without repercussions?

My dear Pablo, any introductory course in symbolic logic will teach you that a disjunction translates into either or, or both. So a he and a she together results in a rich admixture from which a cornucopia of limitless identities spring. That is our strength, Pablo. It is who we are as a nation. It is where our destiny lies. I reach out mes/ours/us’s hand to you Pablo. Please take it.

The sarcasm is strong in this one.

It’s going to take much passage of time before I understand that explanation.

The ultra-liberal orthodoxy is an amoral social engineering experiment in unbounded freedom without societal constraints of religious teachings, ethical consideration or limitations of legality. Strive or not, do as you please largely with little or no personal consequences. Right or wrong has nothing to do with life in their view; you cannot criticize me if you’re not like me in every respect so it’s identity politics set on maximum and damn the consequences.

The social engineers – such as Foxx – believe in taking wealth and property from those who strive and give it to those who don’t regardless of capability either through Government taxation or just outright theft by the individual. The justification is equality of outcome for wealth and incarceration rates and their belief is that this will keep society from imploding.

When criticized, the social engineers tell outrageous lies, revel in opaqueness and double down on their actions and start the name calling to distract from their failures. Their failure of their policies is never the medicine itself, but the dosage – so more is always necessary.

It’s the unintended consequences that keep coming into play; the murders, violence, crime along with the evolution of a permanent class structure without the middle-class providing a means to transition from one to the other. You’re either smart and rich or poor and dumb and nary the two shall meet. Just constrain the violence, crime and drugs to the poor classes and let them destroy themselves – they’re worthless anyway. Ignore the quality of life issues and increase the social program handouts until the money runs out or until the next election cycle, whichever comes first.

Any amoral Government policy such as Foxx’s is irrational and doomed to finally fail after extracting the maximum of cost and pain. That’s easy to see as is why people fall for their pitch and why they eventually get tossed out. What I can’t wrap my head around is what kind of perverse pleasure that Soros gets by funding these prosecutors or what he hopes to achieve in the long run.