“The Administration knows that border security is one of the biggest issues in Arizona so an announcement like this especially at this time makes sense to try to help one of their own.” 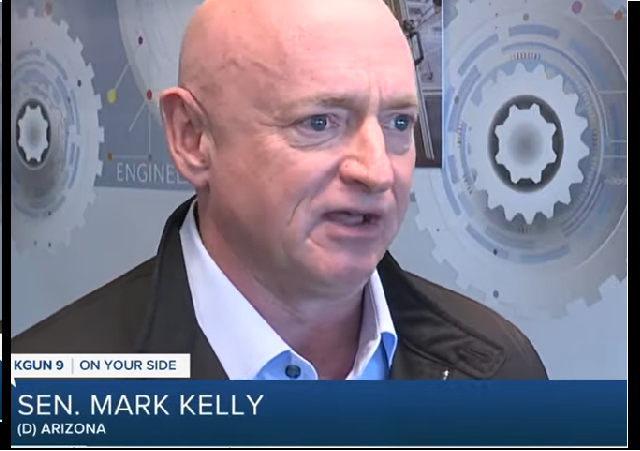 Joe “I am the Democratic Party” Biden vowed that under his administration not one inch of the border wall would be constructed, so it was quite a turn around when the administration announced it would be building a portion of the wall in Arizona.

This put Biden’s press secretary in a sticky spot because she infamously claimed President Trump’s wall was “bigoted.”

.@realDonaldTrump where are the pesos for your bigoted wall?

.@pdoocy destroys the Biden Admin's hypocrisy for building a border wall in AZ.

KJP: We're not finishing the wall. We're fixing the mess of the previous Admin

Doocy: So by filling in the wall, is this racist? You said it was when Trump did it. pic.twitter.com/FWXoZuA63p

Still a bigoted wall, or no? https://t.co/MdGKn9QWjF

So why the sudden rush to get parts of the border wall completed in Arizona? The president for the National Border Patrol Council, Brandon Judd, suggests that it could be to help Arizona Sen. Mark Kelly (D) with his reelection bid in November.

The timing of the Biden administration’s announcement to complete open segments of the border wall near Yuma, Arizona, could be to “help one of their own,” said Brandon Judd, president for the National Border Patrol Council, as Sen. Mark Kelly, (D-AZ), faces a tough re-election fight amid criticism from the GOP over border security and immigration.

Department of Homeland Security Sec. Alejandro Mayorkas announced Thursday that he had approved construction to close several gaps in the border wall in the Yuma sector that have become highly-trafficked spots for border-crossers. Mayorkas said the gaps were a safety risk for migrants due to the proximity to the Morelos Dam.

Kelly for months has been advocating for approval to close those gaps, and celebrated the announcement in a statement Thursday, taking credit for finally being able to “secure a commitment from the administration to get this done,” according to his office.

Never mind that Kelly votes with the America Last Biden Democrats every chance he gets. If this gesture is intended to help Kelly, he’ll have to answer to his constituents for his support and votes for Biden’s open borders policies.

The timing of the DHS announcement comes just three months before Kelly faces a challenging re-election in Arizona where the GOP is hoping to pick up a seat in the Senate.

Judd told Fox News Digital that he wouldn’t be surprised if the decision was politically-motivated, and called the announcement “nothing more than smoke and mirrors.”

“The Administration knows that border security is one of the biggest issues in Arizona so an announcement like this especially at this time makes sense to try to help one of their own. But if people will do the proper research they will find that filling in the gaps with the current situation in that particular area does not help improve border security,” Judd said.

. . . . “Mark Kelly doesn’t care about the border — he has rubberstamped Biden’s open border agenda every step of the way. Arizonans will vote him out come November,” RNC spokesperson Will O’Grady told Fox News Digital Friday.

Closing the Yuma border wall gaps are only part of the issue facing the region, Judd told Fox News: “The current issue, especially in Yuma is not one that can be solved by infrastructure, it can only be solved by legislation or policy.”

Kelly, of course, could propose legislation that would shut down the border, but according to the NRSC, he’s doing the exact opposite (while touting minor disagreements with Biden as his weak “maverick” impersonation).

Instead of working to secure the border and protect Arizona communities, Mark Kelly has:

Mark Kelly does not support improving border security – he supports open borders and his border crisis.

Biden is beholden to Red China, and is doing their bidding, destroying our country. In other words: he is a traitor.

Everything else is a distraction from his treason.

either a distraction of aiding it in some fashion.

None of this is random

The distraction is Mark Kelly’s face. I was so distracted I couldn’t function the rest of the day. I don’t think I’ve ever seen an uglier POS.

You’re looking at a man so stupid that he once boasted to America that he was going to show everybody how damn easy it was for Joe Sixpack to get a “weapon of war” in this country; went shopping for a vanilla semi-automtic AR-15 in free Arizona (not someplace like Massachusetts or New Jersey); and despite a 100% clean criminal record and prior service as a freaking astronaut, got rejected three times and never did get one.

Thirty seconds after the election is over, all the money for this will zip back to Washington and leave abandoned equipment and giant holes in the fence. Doesn’t matter who wins the election.

And if the Republicans manage to win a majority in the Senate, there will be an IMMENSE push to ram through a few trillions in pork in the lame duck session. From what I understand, ‘Budget reconciliation’ is only able to be used once a year, but the Government Fiscal Year starts October 1, so…

IMO, too little too late to help appease any voter concerned with border security in AZ. Messaging and PR and media hind covering sure it helps for all that but no one who had border security in their top three issues is going to be influenced by this.

Yeah, no silver lining there.

The temporary border sections will go up with duct tape and come crashing down if Kelly is re-elected.
With the DemonRats it’s always about money and power.

Yet we the people gripe amd sit in our houses. If we actually organized
Well maybe we end up in the same cells as Jan 6
But we are the people

Are you aware that AG Patton, the right hand of Abbott, refuse to declare an invasion

“Because they aren’t wearing uniforms”

Can’t make this crap up

I detest those two posers but what , Beto?

We are so screwed

It’s already 3-3.5 million, it will be 10 million before they are done

Paxton. If you’re going to slander people, at least get the names right.

That “uniforms” is critical ( an invading army under a flag) because of the language of the Constitution.

We cant harp on the left about “ignoring” the laws and Constitution and turn around and do it ourselves.

If they aren’t wearing uniforms, doesn’t that make them spies?

Re: Geneva Conventions it would be “unlawful enemy combatants” without uniforms or recognized chain of command.

I’d LIKE to say that nobody is stupid enough to fall for this laughable BS.

But then again this is the same state that sent McCain’s worthless RINO ass back for decades, so it might actually work.

If they do fall for it, they get what they deserve

Today is the day we get to find out whether AZ Republican voters are still asleep enough to promote RINOs.

Meanwhile WashPost’s Jennifer Rubin wants Biden to cancel the midterm elections to “save democracy”. Of course he has no such power and trying to do that would launch a civil war

Unless it was one of those fake titles like people make about The Atlantic, I guess?

Kelly’s wire, Gabby Giffords, has a documentary out and in theaters now. https://www.azcentral.com/story/entertainment/movies/billgoodykoontz/2022/07/11/gabby-giffords-wont-back-down-movie-review/7828002001/

How often when a Dem is running is there some kind of book or movie release – timed for the media saturation and publicity? I imagine Mark Kelly would not have been elected if not for her and the emotional / sympathy vote. The timing of the movie suggests the same old manipulative emotional tricks from the Dems are in play for Kelly’s re-election. Time to run that rotten tomato down the disposal.

“I imagine Mark Kelly would not have been elected if not for her and the emotional / sympathy vote.”

And the fact that the Republican incumbent, appointed as a sympathy gesture, was about a inspiring and useful as a glass of warm water.

If Kelly loses, don’t be surprised to see the the project canceled or delayed for a boatload of lame reasons.

It is announced but not completed, nor will it be completed under the Dems.

Everything that the vile Dumb-o-crats do is about political power and crass self-interest. God forbid that these idiots every undertake anything because it’s rational and the right thing to do, inherently.