Will we get another show from AOC? 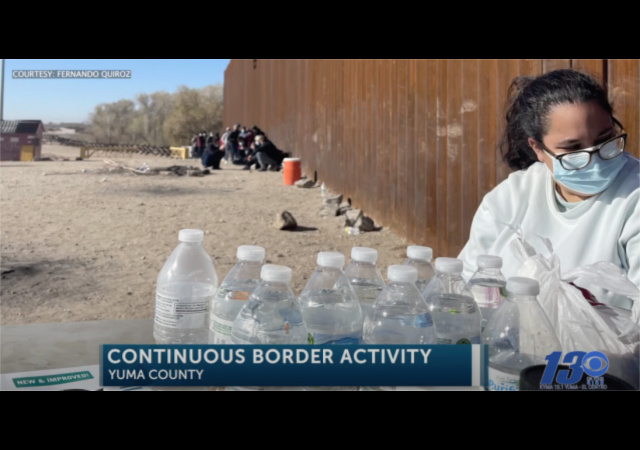 Vulnerable Arizona Democratic Sen. Mark Kelly wants to win in November. Illegal immigration is drowning the state. Gov. Ducey has been sending people on buses to Washington, D.C. But that’s another story.

I guess his susceptibility got to the point he couldn’t ignore it because Kelly pushed President Joe Biden to build a portion of President Donald Trump’s border wall in Arizona.

After many months of pushing the Biden administration to close border barrier gaps near the Morelos Dam, today, Arizona Senator Mark Kelly announced that the Department of Homeland Security (DHS) has authorized Customs and Border Protection (CBP) to move forward with closing the gaps located near the Morelos Dam in the Yuma Sector. Listening to city leaders, local law enforcement, and Border Patrol, Kelly worked to ensure DHS closed the gaps posing security challenges in Yuma.

After months of coordination and planning with the White House and DHS, Kelly’s office was able to secure a commitment from the administration to get this done. Kelly first pressed President Biden to close this and other gaps in December of 2021, and had numerous calls with DHS Secretary Alejandro Mayorkas, as well as the White House, to press them on approving the closures. Recently, in his sixth visit to the southern border, Kelly toured the site near the Morelos Dam where he also met with local leaders and law enforcement about how the gaps and border crisis were affecting their communities.

“For too long, the Morelos Dam area has been an operational challenge for Border Patrol agents to properly secure the border and keep our communities safe. I’m glad that the Department of Homeland Security has listened to Arizona and is going to close these gaps. This is a step forward and I’ll keep working to ensure that Arizona has the tools needed for a secure and orderly process at the border including fencing and barriers where they make sense,” said Senator Kelly, who led the effort to close the gaps near Morelos Dam.

The Department of Homeland Security released its own press release:

Secretary of Homeland Security Alejandro N. Mayorkas has authorized U.S. Customs and Border Protection (CBP) to execute the Yuma Morelos Dam Project to close four gaps located within an incomplete border barrier project near the Morelos Dam in the U.S. Border Patrol’s Yuma Sector. These projects address operational impacts, as well as immediate life and safety risks, and will be funded with DHS’s Fiscal Year 2021 appropriations.

The gaps are located within the former Yuma 6 project area, a border barrier project that was previously funded by the Department of Defense’s (DoD) military construction appropriation pursuant to 10 U.S.C. § 2808. Due to the proximity to the Morelos Dam and the swift moving Colorado River, this area presents safety and life hazard risks for migrants attempting to cross into the United States where there is a risk of drownings and injuries from falls. This area also poses a life and safety risk to first responders and agents responding to incidents in this area.

The three Republican senate candidates have a primary on Tuesday. Kelly getting Biden to fill in that portion takes away a talking point the candidates could have used against him:

The timing of the announcement is conspicuous. Kelly is facing a tough November midterm election against a group of America first Republicans vying in Tuesday’s GOP senatorial primary to face him, including Jim Lamon, Blake Masters, and retired Air Force Maj. Gen. Mick McGuire.

“It’s great that DHS is moving forward with a project that should already be done, but this small gesture does not make up for the repeated failures on border security over the past two years,” McGuire told Newsmax in a statement Thursday. “By Kelly’s own admission, he ignored this problem for nearly a full year after taking office. That’s not good enough.

“Arizona needs a senator with true operational experience securing our southern border, who understands why we need more than just a wall — experience I have as the former commanding general of the Arizona National Guard.”

Construction pieces sat near the huge gap, which allowed migrants to freely cross the border.

Yuma officials have wanted the gaps filled in for a long time. This is from April:

“We need to get these gaps filled up,” Yuma Mayor Douglas Nicholls said. “There’s 52 gaps, 52 gates missing in the border, and about seven miles of fencing missing and a lot of electronics missing.”

In December, the Yuma mayor declared a humanitarian crisis at the border.

Since October, agents have encountered nearly 119,000 migrants along the Yuma sector, which includes part of California.

That’s more than in fiscal year 2021 altogether and nearly 14 times more than 2020 during the pandemic.

I will believe this when I see the wall is completed.

Do they get the free Biden T-shirts before or after they invade the country?

Migrants? Did you mean illegal aliens?

No he meant illegals.

Don’t get too excited. The plan is to fill the gaps with chocolate pudding.

Yes, but only after they run out of tissue paper.

Way too little way too late

And if Kelly expects to get any electoral momentum out of this, it’s going to need to get a lot more airplay here in Arizona. This is the first my wife and I have even heard of it.

Didn’t they scap out all the prefabricated sections of the wall?
And now they have to start fresh???
Paid for, paid built, and paid to scrap them out?
Yes, it is true.

Depends on how smart the contractors were when they got the contracts, and if the contracting agents during the Trump admin wrote the contracts right. If so, there was a fairly large cancellation fee the contractors received when the Gov cancelled their contract (written in), and a reimbursement of *potential* expenses when the contractors had to dispose of any unused construction materials. Smart contractors would then sell those panels to a subcontractor, who would then sit on them until the political winds change and the wall once again becomes a priority. At that point, they can sell them back to the contractor at a nice profit for installation. (This is all theory, by the way.)

Damn that Abbott!! Why didn’t he do this when he was president?………..Uh, Oh yeah. Never mind.

This is just a token act solely for political gain ( and a temporary one at that) by Kelly. (Ducey as well)

Exactly. Win or lose, the building process will stop after election day.

I cannot see this being completed before the Nov election. Kelly is getting pounded on this issue. The AZ state government actually included in their budget money for the wall. So it will be a race….AZ versus the feds….I would bet on AZ with Kelly taking credit for it.

This is unlikely to help Kelly. The obvious retort to Kelly and his ‘look what I did for you’ BS is why wait 18 months into the Biden Admin? If the gaps presented safety and security issues why not complete it before now?

My personal thought is that “conservative voters” better get on the stick and start PUNISHING these RINO’s rather than falling for these last minute “whiny objects”.

As your retort points out

We are a voting block of MAGA must stop falling for and letting them get away with this.

We talk about holding the left accountable- we need to start in our own house first and hold the RINO accountable.

Ummm, Kelly is an actual Democrat.

Of course, Kelly isn’t a RINO. He’s a D, and (with his D ex-congresswoman wife) personally runs what may be the biggest gun-control organization remaining in the US.

How conveniently close to election time, much like our decreasing gasoline prices in spite of the usual high summertime demand. The Rs need to keep saying it’s to buy the election because the voters have short memories.
.

Amazing how things get done during an election year.