So many twists and turns I think Karine Jean-Pierre left the briefing in the shape of a pretzel. 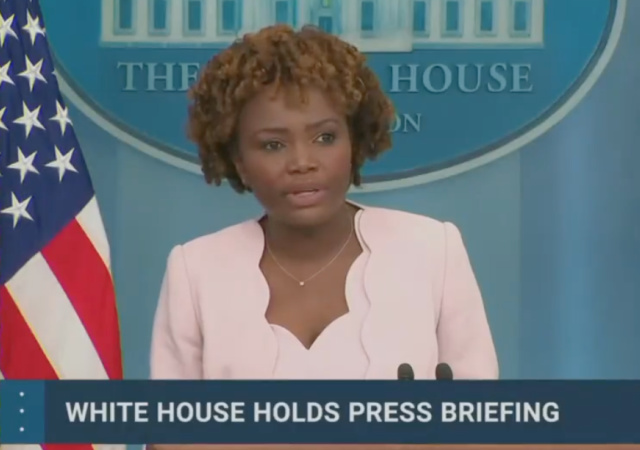 We found out on Thursday the Biden administration will fill in the gaps in Trump’s border wall near Yuma, AZ.

In our #nabjnahj2020 interview, @JoeBiden promised that ‘not another foot of wall would be constructed” on the border. Watch our exchange: pic.twitter.com/rM9OgsYicU

Doocy: "President Biden, when he was a candidate, said: 'There will not be another foot of wall constructed in my administration.' So what changed?"

Jean-Pierre: "We are not finishing the wall." pic.twitter.com/rZZKcKH49l

You’re not? I know this administration loves to change language and linguistics, but this is too much.

Also, in 2019, Jean-Pierre called Trump’s wall racist. Is it racist when Biden does it?

Jean-Pierre had the hardest time justifying the action while calling it ineffective and racist and claiming you’re just cleaning up Trump’s mess while trying to save lives:

“If walls work in that part of Arizona, is this the administration trying to get migrants to cross somewhere else, like in Texas? What is the plan?”

Jean-Pierre repeated her previous answer before adding, “we are trying to save lives.”

“By finishing the wall, is this —” Doocy began before Jean-Pierre cut him off.

“We are not finishing the wall,” she said.

“By filling in? Finishing?” Doocy probed, searching for a word to describe how a previously uncompleted section of physical barrier at the southern border will now be completed under Biden’s directive.

“We are not finishing the wall,” Jean-Pierre said for the fifth time.

“By filling in the wall, is this racist? Because in 2019, when the former guy was proposing a wall, you said that it was this racist wall. So how is this any different?” Doocy asked.

“I’m not even sure how you get to your first question to this question that you just asked me. I will say this, a border wall … is ineffective use of taxpayer dollars,” Jean-Pierre said. She went on to repeat for the sixth time that the Biden administration is not “finishing” the wall and that it is “cleaning up the mess that the last administration made.”

But I guess it’s not ineffective when you just say that you’re cleaning up Trump’s mess and Biden’s doing the building.

It also will only save lives because Biden is building it.

WHAT is going on?!

.@pdoocy destroys the Biden Admin's hypocrisy for building a border wall in AZ.

KJP: We're not finishing the wall. We're fixing the mess of the previous Admin

Doocy: So by filling in the wall, is this racist? You said it was when Trump did it. pic.twitter.com/FWXoZuA63p

Doocy: "Why is the Biden Administration building a border wall in Arizona?"

Jean-Pierre: "We are not finishing the wall, we are cleaning up the mess the prior administration left behind in their failed attempt to build a wall." pic.twitter.com/XJThbjfJFn

If somebody lied to my face like this bitch does on TV every day, I would punch them right in the throat.

Now…now…Let’s be more adult, say “I would manually compress there trachea “….isn’t that more civilized????

Which would not be in your interests you would be arrested. The couple of conservatives in the audience, you should appreciate them because you just admitted you wouldn’t be able to do their job.

Translation – Sen Kelly is up for re-election and he convinced us to finally address the gaps left in the wall when we shut down construction that was already paid for due to ideological reasons. Stop asking me about this, we are trying to hold the Senate and anyway when d/prog do stuff it’s good and virtuous but when evil r do the same stuff it’s racist because reasons. Next question!

But she’s black AND she likes the vajayjay, so we’re supposed to celebrate her, despite her ignorance and stupidity.

They’ve already dug an old tweet from this dumb bint that literally says ‘@realDonaldTrump where are the pesos for your bigoted wall’.

The fact that they’d even TRY to lie about this is so utterly insane it makes me question if I’m hallucinating.

We sent them to Ukraine lol

They lie because they know only FOX will point it out. FOX is the most popular news outlet on cable, but their numbers are a fraction of the weekday national news broadcasts. You know NYT, WaPo, and USA Today will bury the “contradictions” deep in the papers. If they cover them at all.

The truth to them is what they say it is, nothing more or less

I remember when this country used to make fun of Baghdad Bob. Now we have an entire government full of them.

Diversity hire is bad at her job. News at 11.

THERE ARE SIX LIGHTS.

Very dim ones too…

Sad thing is that stupid cunt actually believes the drivel that she is spewing. Biden’s goal has been to undue everything that Trump accomplished. In doing so he took the biggest economic growth period in the US to the quickest recession in history. In 16 months Biden has accomplished what Jimmy Carter did in 4 years.

They are lying because the Leftists will back those lies as if they were truth. It Does Not Matter To Them! In the study of history, newspaper articles are primary sources….and counted as generally reliable. So… as long as they stay in power, they win.

Says she’s an immigrant too, so an extra A-A bonus point there.

I’ll also concede that she’s cute. Which is helpful when you’re on the TV and need to dissemble publicly and frequently.

Do they ever not blame everything on someone else?

This is hilarious. The incompetents in this “administration” seem to have trouble with the English language. Maybe, they should try Ebonics, Swahili, or Esperanto.

This little dummy will take some of the pressure off of AOC for Anointed Queen of Stupid. Alas, stupid is the standard by which press secretaries are created.

Was this written by folks from SNL or Monty Python?.. then again, being really old, I was thinking,

How does Doocy keep from just cracking up?… really, it impresses me.

How soon before mental gymnastics become an Olympic event?

Don’t even go there, especially under this administration. Biden would be forced by the NCAA to replace Jean-Pierre, KBJ, and all the others with men who identify as black females, because they smash the women in all the events. We’d have the first all white male administration since Nixon.

I can’t read this article. The headline is making me furious.

Film it all and put it up on all of the public outlets side by side with her denials and snippets.