“[T]he Court should instruct the district court to enter a preliminary injunction enjoining the Department from enforcing the Policy. New York, like all other states, should allocate live-saving treatments to all its residents based on neutral, objective criteria regardless of their race or ethnicity.” 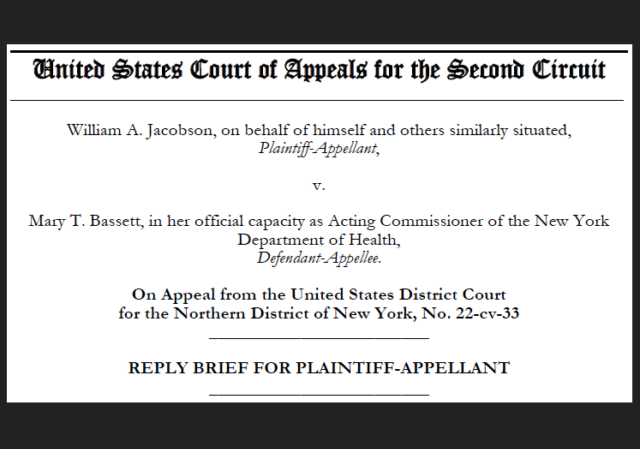 On May 18, I noted that My Appeal Filed Challenging New York’s Racially Discriminatory Covid Therapeutic Guidelines. That post has links to all the pleadings and briefs in the District Court, and a summary of the case from our Brief in the Second Circuit:

Plaintiff fails to satisfy any of the requirements for Article III standing. Plaintiff cannot allege an injury-in-fact because any equal protection injury he might suffer is purely speculative, and because the challenged guidance has never served as a barrier to COVID-19 treatment for white and non-Hispanic persons. Plaintiff also cannot show traceability or redressability both because the challenged guidance is not binding on health care professionals and because it largely tracks federal standards that would remain in place even if plaintiff were to prevail in this suit. In addition, plaintiff’s challenge is moot because the challenged guidance applied only during an initial period of supply scarcity. A decision in the State’s favor on any one of these grounds warrants affirmance or dismissal of the appeal as moot.

Even if plaintiff were somehow able to surmount all of the threshold obstacles discussed above, the proper remedy would be for this Court to remand the case to the district court for further proceedings, including resolution of plaintiff’s motion for a preliminary injunction in the first instance. There is no reason for this Court to decide the motion for the first time on appeal, and the record before the Court provides no basis for granting preliminary relief, as plaintiff has failed to establish irreparable harm, a likelihood of success on the merits of his equal protection challenge, or that an injunction would be in the public interest.

Today we filed our Reply Brief:

The case is on the Second Circuit’s Expedited Calendar, but as of this writing the court electronic docket does not reflect an oral argument date.

It’s just crazy that the vile Dumb-o-crats believe that it’s allegedly morally acceptable, and, laudable, to issue edicts stipulating that medical care be dispensed on the basis of race/ethnicity. For all the Dumb-o-crats’ “racial justice” posturing and rhetoric, they are the ones who are now brazenly and unabashedly promoting manifestly unconstitutional racial discrimination.

These “guidelines” aren’t merely morally contemptible — they are evil. And, how disgraceful is it (though, unsurprising) that the AMA files an amicus brief supporting this despicable conceit.

“It’s just crazy that the vile Dumb-o-crats believe that it’s allegedly morally acceptable, and, laudable, to issue edicts stipulating that medical care be dispensed on the basis of race/ethnicity.”

Yup. What will those clowns do next? Put Japanese-Americans in detention camps?

It’s shameful to have to ask like this in a country we built. Legally you can ask for equal treatment. Morally, compensation for this insult is needed.

On the other hand, and I admit this is “crazy”, if these poison pokes have a purpose other than vaccination, the Malthusians could just be first targeting the ethnic populations that Margaret Sanger’s Planned Parenthood has been effective in keeping in check. If so, then you are saving the lives of people who have been understandably very suspicious of getting poked. The rest of the excess population can be dealt with later? Why else are they so focused on poking children with vaccines that have possible a delayed side-effect of sterilization?

If it weren’t for the fact that just about all of the “nutty conspiracy theories” have proven to be true over the past few years ( and so much worse than we even imagined), I wouldn’t even be thinking of this. It just fits into the WEF’s official Fourth Reich narrative so perfectly. These fascists may speak about their love of the planet and of humanity (in that order), but they sure hate people. Especially us “undesirables” which accounts for about 70% of the global population threatening the planet for the “special” people.

No such thing as a “nutty conspiracy theory” anymore.

Here’s one that will be in the news today.

Lots and lots of theories about this monument that involve George Soros and the Davos crowd.

A well-argued case. I hope that your appeal is granted.

Good luck!! Looking forward to seeing which judges are on the panel.

Another instance of progressives not having vision to look very far ahead. Suppose their counsel is asked the following question at oral argument: if a white individual asks for the treatment and does not have one of the extra factors, i.e., is in circumstances where the treatment would automatically be given to a black individual, the state denies the treatment, and the white individual dies, is the state prepared to allow the governor, members of the legislature, members of the health department and the doctors who denied the treatment to be prosecuted for manslaughter or to face a tort suit for wrongful death? If the answer is yes to any of these, the lawyer looks like an idiot arguing that the state’s position is that people have to die before a blatantly racist policy can be reversed. If the answer is no, then this becomes the Ford Pinto case where executives knew in advance the cars would explode but decided that it was less costly to fight the ensuing lawsuits then to change the design.

A more accurate brief by the State would have stated: ‘please don’t require us to defend this blatantly unconstitutional aberration that even we would decry if a private sector actor attempted this BS’.

Here’s what I found on the NYC Dept of Health website site in early 2022:

Yet elsewhere on the same website they state that certain biological traits, such as being overweight and having underlying health conditions as well as personal traits, such as smoking, depression, and substance abuse puts you at higher risk of getting severely ill from COVID.
One can only conclude that “wokeness” has also taken over even our government’s health agencies weakening their credibility.

Hunh….no access to food, but they are overweight.
Hunh.

What an atrocious policy NYS has adopted! Martin Luther King, Jr., must be rolling over in his grave. I’m so glad Professor Jacobsen and Legal Insurrection are on the case. NYS’s ideology-driven arguments would not even compete with Jacobsen’s analysis except before an ideologically driven judge.