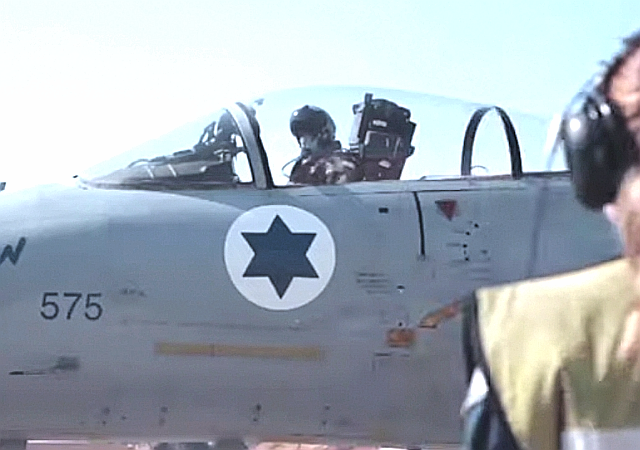 Amid Iran’s advancing missile, drone, and nuclear weapons program, Israel is forging a Middle East air defense alliance to shield the region from Iranian aggression. On Monday, Israeli Defense Minister Benny Gantz said that Jerusalem is building a “wide partnership with additional countries in the region,” which “includes aerial defense.”

The Israeli defense minister’s statement comes after a recent report in The Wall Street Journal claiming the formation of such an alliance following “undisclosed talks” between U.S., Israeli, and Arab military officials. So far, the U.S. and Israeli officials have not responded to the daily high-level military talks reported by the U.S. business.

“The U.S. convened a secret meeting of top military officials from Israel and Arab countries in March to explore how they could coordinate against Iran’s growing missile and drone capabilities, according to officials from the U.S. and the region,” the WSJ reported Sunday.

Israel is building a regional air defense alliance to defend its members from Iran, Defense Minister Benny Gantz said Monday, appearing to confirm, at least in part, a report that the Israeli military was in talks with its Saudi and Qatari counterparts on the matter.

“We are building our wide partnership with additional countries in the region to ensure a secure, stable and prosperous Middle East. Among other things, this also includes aerial defense,” Gantz said, speaking at the start of his Blue and White party’s faction meeting in the Knesset.

“We will strengthen this, as a stable Middle East is an international, regional and Israeli interest of the highest order,” he said.

Besides a rogue nuclear weapons program, Iran has one of the most advanced and sophisticated missile programs compared to the nations of the Arab Middle East. The regime possesses not only several types of nuclear-capable ballistic missiles but also provides terrorist groups like Hamas and Hezbollah with rockets and related technology.

Iran’s drone program also poses a threat to the region. “After decades of steady development, Tehran now uses drones to complement its missiles and support the broader effort to bring the entire Middle East within its range,” the think-tank Washington Institute for Near East Policy reported in March 2022.

Last month, the Iranian military unveiled a massive underground base at an undisclosed location that houses more than 1oo attack and reconnaissance drones. “Iranian state television on Saturday broadcast footage of an air force base for drones under the Zagros mountain range in the west of the country,” the French news agency AFP reported on May 28.

Much like its missile program, Tehran supplies attack drones to its terrorist allies across the Middle East.

The revelation comes as the Biden White House revives nuclear talks with Iran. “Iran and the United States appeared poised Tuesday to start indirect talks in Qatar aimed at finding a way to save Tehran’s tattered nuclear deal with world powers,” The Associated Press reported.

As AP noted, President Joe Biden has sent his Special Iran Envoy, Rob Malley, to oversee the nuclear talks in Qatar. Malley, however, is anything but an honest broker. Malley was booted out by the 20o8 Obama presidential campaign after it became known that he was holding secretive “unauthorized” talks with Iran-backed terrorist group Hamas. He was “forced to sever ties with the campaign when news outlets reported he had met with members of Hamas, the Palestinian militant group that the State Department classifies as a terrorist organization,” NBC News reported in 2015.

With someone like Malley steering the U.S. foreign policy in the Middle East, Israel should genuinely fear another disastrous nuclear deal and the resulting regional chaos from an emboldened and aggressive Iran. Apparently, Israel is not alone in this assessment, and some Arab states seem willing to put aside their decades-long animosity toward the Jewish State to face the real existential threat posed by Iran’s Mullah regime.

I thought I’d just warn people that make comments that the moderators of LegalInsurrection are engaged in stealth censoring comments that they do not like. Logged in you’ll see your comment in the comment section as usual. But when logged out and viewing as a anonymous person the comment disappears from view.

Really sorry to hear that. Please reconsider, as your comments and feedback mean a lot to me.

I am sure there is no censorship. Probably a technical thing.

LOL…this is pure nonsense as this platform is nowhere near advanced enough for that kind of administration.

Most likely issue is that you have a cached page that still shows a deleted comment. I’ve not seen a lot of heavy handed moderating so perhaps you’d like to explain your deleted post in benign terms so we can discuss what you were saying.

Lucifer, check this out:
https://disqus.com/home/discussion/channel-discussdisqus/embed_we_were_unable_to_load_disqus_and_3rd_party_cookies/

Seems unlikely for a site so concerned about historical accuracy that comments cannot be edited by their authors. But I’m open to evidence.

The Devil you say! Try Yahoo. You’ll be back.

As always, pleasure is mine!

Maybe this will be the start of the United Hebrab Republic that’s mentioned in the movie “Americathon”.

It’s comical that the only way that the utterly vile and stupid Dumb-o-crats can help cement stronger ties between Israel and moderate Arab countries is indirectly, by their utterly stupid, naive and indefensible enabling of/kowtowing to, the Iranian regime and its malignant and belligerent despots.

Just a guess, mind you, but I think the reason that the military talks with the US, Israel and arab nations are so secret is the necessity to keep that information from the US administration.

The Israelis had better be getting with it, and without giving any hint of their intentions to the US government. The time is fast approaching when they are going to have to lay some nukes on the doorsteps of Iran’s underground nuclear facilities, or expect nukes on Israel. It would be best if they had another election first, and Netanyahu back in the saddle, but there may not be time.