The complaint alleges Brentwood substituted a classical curriculum with one based in racial greivances, promoted racially segregated parent meetings, and “sandbagged” the formation of an affinity group of Jewish parents concerned about such changes.

Brentwood School in Los Angeles, where tuition can reach over $46,000/yr, is considered one of the most prestigious K-12 schools nationally, and the alma mater of famous figures such as Jonah Hill, Patrick Schwarzenegger and Andrew Breitbart. Both the school and its head of school Michael Reira were recently named respondents in a new lawsuit filed on June 8 by a parent, Jerome Eisenberg.

According to his complaint, Eisenberg was satisfied with the 7th grade education his daughter received in the 2019-20 academic session, but he alleges that the school made drastic and surreptitious changes to their curriculum in 2020-21, after he had committed for his daughter to attend the school for that year. He also claims the school organized racially segregated meetings and discriminated against a group of Jewish families, faculty and staff, what he termed in the Complaint a “scheme to transform the school under a racially divisive, anti-Semitic ideology that seeks to indoctrinate children to reject Western values.”

The school gained notoriety last year as a culture war battleground after school community members spoke out about what they saw as drastic curriculum changes prompted by the killing of George Floyd.

Brentwood School is a member of the National Association of Independent Schools (NAIS), an organization that guides the governance of over 1,600 private K-12 schools (called “independent” schools) throughout the country. The NAIS drives the radical racial and gender programming now endemic in these elite schools that feed higher education, journalism, politics, and government.

The action was filed on his behalf by the Pivtorak law firm, in California Superior Court for Los Angeles County.

NEW LAWSUIT ALERT: Today my firm filed an action against the Brentwood School, a prestigious private school in LA, alleging that it engaged in anti-Semitic discrimination against Jewish parents who were concerned about radical DEI policies being implemented behind their backs.
/1 pic.twitter.com/ecilCzP1db

According to the complaint, soon after the killing of George Floyd, the Brentwood School handed over control of the curriculum to its “Office of Equity and Inclusion,” an internal arm whose “staffing had increased ten-fold in a short period of time.”

Eisenberg further alleges that this resulted in a shift to a “race-based operational model” that “fundamentally transformed the agreement entered into with parents and students without consent, knowledge, opportunity for discussion, or alternatives,” changing a classically liberal education towards “a forced re-education that rejects Enlightenment values in favor of an identity-based ideology of grievance, resentment, and racial divisiveness.”

Examples listed include the school replacing classic fiction such as “To Kill a Mockingbird” and “Lord of the Flies” with Ibram X. Kendi’s “Stamped” and the 1619 Project curriculum, and that the Head of School withheld these changes from parents, only gradually revealing them via public communications throughout the ’20-’21 year. At one point, the complaint reads, the English Department “told parents that if they wanted their children to read Shakespeare or Hemingway, they should do it on their own free time.”

Eisenberg claims that when he questioned why these radical changes were being made unilaterally without parent input, he was told the school’s educators were the experts, and parents’ ideas “were now outdated.” According to him, Riera went on to say that a “new world order” was coming, and if the school didn’t make changes now, an opportunity to capture the “hearts and minds” of the students would be lost.

In addition, the suit mentions that “young students were also given a diagram called ‘How am I Addressing White Supremacy?’ that accuses them of ‘racism’ and ‘anti-blackness’ based purely on the color of their skin.” A reference to this diagram shows an escalating series of affirmations along a scale that frames silence and a belief that “all lives matter” as backward, and more radical political commitments as more evolved. 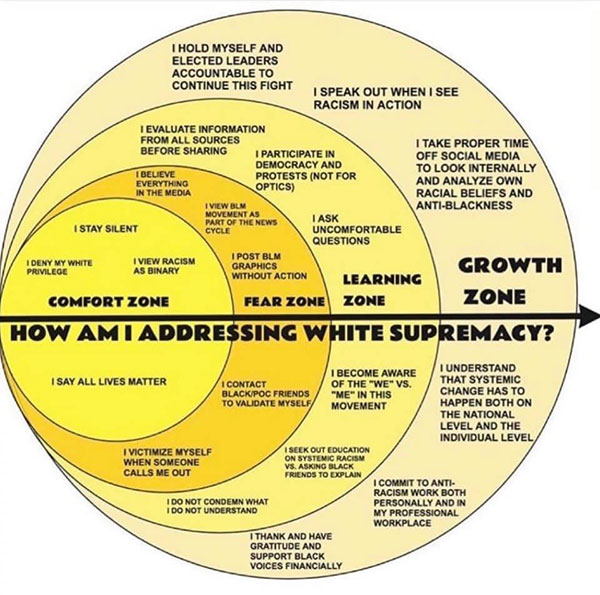 The plaintiff contends that as a result of these newly implemented policies, “the atmosphere at Brentwood changed completely. Teachers began to engage in racial and political humiliation of their students.”  He claims that middle-school teachers “confronted their students about their ‘white privilege,’ and how they were going to redeem themselves,” and that students were compelled to study charts like the one above that “made bigoted assumptions about them and required them to engage in political activism based on those assumptions.”

Accusations of disparate treatment and “sandbagging” a Jewish parents’ group

Later in the complaint, Eisenberg alleges that the defendants “intentionally stifled…community members from forming a Jewish affinity group,” by failing to communicate with them, providing contradictory instructions, and requiring without explanation two faculty advisors instead of the single advisor other groups needed. Additionally, Eisenberg claims the Jewish group was not permitted to choose their own parent committee, a right afforded to other groups. According to the allegations, Riera “forced out the individuals chosen by the Jewish parents group and installed his own preferred candidates, who had no ties or involvement with the group’s formation” in order for him to “exercise personal control.”

The suit goes on to alleges that in January 2021, the school announced racially segregated zoom meetings for faculty, staff, and parents, called ‘Dialogue & Community-building Sessions.’

[According to the complaint, the school “announced plans to hold dozens of these meetings throughout the 2021 school year.” It is further alleged that Brentwood treated Jewish parents, families, faculty and staff differently than other groups by assigning them to a single meeting.]

Eisenberg says that when he pleaded with the school to end this “racially discriminatory” conduct, and “reinstate the race-neutral policies promised in their agreement,” Defendant Riera threatened to expel his daughter immediately unless he remain silent. Although Eisenberg claims he complied with the head of school’s request, ultimately his daughter’s offer to return as a 9th grader was revoked.

David Pivtorak of the Pivtorak Law Firm, who is representing Eisenberg in the case, offered this comment:

“I think this case exemplifies the idea that with extremism—whether of the far-left or far-right variety—the horseshoe always converges on anti-Semitism. We saw this with the Ethnic Studies Model Curriculum that California was trying to mandate for every schoolchild that singled out Jews for their supposed “privilege” and we’re seeing it with the proliferation of DEI departments throughout most of our institutions. Make no mistake, most parents hate that their kids are being exposed to this but don’t dare speak out for fear of being ostracized. I’m extremely proud of Mr. Eisenberg for bravely taking on this fight to protect his child. Hopefully this will encourage others to take action and save their children from this radical ideology.”

We reached out to Brentwood, but as of this writing we have not received a comment from either the school or Head of School. In a New York Post story published June 11, 2022, a spokesman for the school asserted that “The allegations contained in the complaint are baseless, a work of whole fiction and nothing more than a desperate attempt to embarrass the school.” A Daily Mail story released the same day quotes a representative of the school as saying further that “The plaintiff’s arguments are unsupported by actual facts and we look forward to proving that in court.”

“The allegations contained in the complaint are baseless, a work of whole fiction…”

Let us mark his words!

This is the culmination of the takeover of the schools by the socialist left, under the guise of “antiracism” and “equity.” The DIE curriculum does not seek to instruct children, but rather, indoctrinate them into the leftist/socialist/progressive/communist mindset.

The plan was revealed by parental observations of ZOOM classes, unmasking this indoctrination and the substitution of real learning for racist equity training.

The parents that sent their kids to these independent/private schools were misled about their intent and curriculum, and should institute a class action suit which could serve as precedent for parents in other schools around the country.

Of course, given the leftism in the law schools, getting an honest attorney might be difficult.

It’d be cool to have Mr. Eisenberg expand upon this at LI. Calling this Orwellian doesn’t begin to do it justice. Tucker should cover this.

You have to bear in mind that here in Brentwood, probably almost all of these Jewish families are liberal Democrats. That’s how toxic this stuff is and why Tucker and others should hammer the message day in and day out.

Inflation and the price of gas, etc., … everybody has to deal with … no need to hammer those messages as everyone is well aware …

So hammer this message to the public … many of whom are unaware of what’s going on if they don’t have kids in school right now.

…Riera “forced out the individuals chosen by the Jewish parents group and installed his own preferred candidates, who had no ties or involvement with the group’s formation” in order for him to “exercise personal control.”

This reminds me of the political commissars assigned to Soviet military units, whose job it was to maintain a politically-correct ideology within the ranks. The purpose of the above-mentioned “preferred candidates” was, no doubt, to similarly assure the integrity of the party-approved indoctrination program.

Diversity, Inequity, and Exclusion (DIE) is a doctrine of the Progressive Church, Agency, Corporation, Clinic, and School. One step forward, two steps backward.

The vile Dumb-o-crats are the most manifestly corrosive and regressive force in American society. Their corrosive racial tribalism, obnoxious racism and racial obsessions bring the U.S. backwards, not forwards.

Question: if he didn’t like the 8th grade, why re-enroll his daughter in the 9th grade? Something doesn’t add up.

This is American Marxism in practice

To quote Orwell: All animals are equal, but some animals are more equal than others. That’s BLM all the way.

Once you turn away from God you must rely on the minds of evil men. Winning the lawsuit will not protect your children. The evil will remain in the form of teachers unions.