Peak now will be known as First Peoples Mountain. However, still no word on the oil permits being processed by the Department of the Interior. 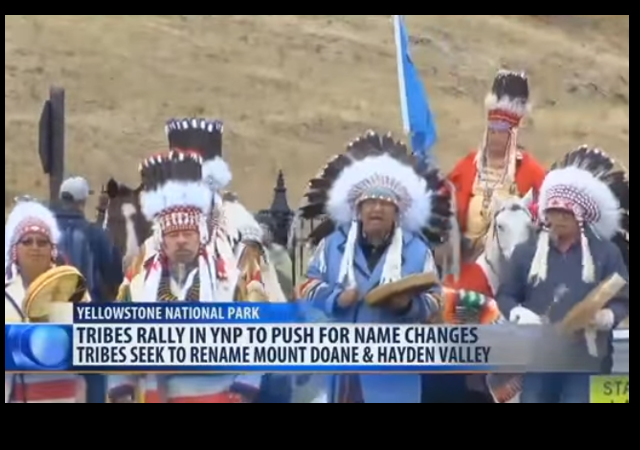 It’s good to see that our Department of the Interior has resolved all the critical issues in this country (including the approval of leases for petroleum exploration), so that the National Park Service can spend its time on critical issues.

The agency said Thursday the change was taken to remove an “offensive name” from America’s first national park.

The U.S. Board on Geographic Names voted unanimously, 15-0, affirming the decision.

The Wyoming mountain stands at 10,551 feet east of Yellowstone Lake.

The mountain took its name from explorer Gustavus Doane, who served in the US military and fought in several campaigns against American Indian tribes.

Born in Illinois in 1840, Doane grew up in California and attended the University of the Pacific at Santa Clara before enlisting in the “California Hundred,” a federal volunteer unit absorbed by the Second Massachusetts Volunteer Cavalry.

After attaining the rank of sergeant by 1864, he resigned to accept a commission as a lieutenant with the first regiment, Mississippi Marine Brigade, according to Montana State University.

After the Civil War, Doane was appointed mayor in Yazoo City Mississippi in 1867.

A year later, he applied for a commission with the army and was appointed second lieutenant in the Second US Cavalry.

For the next 24 years, Doane served with the regiment, attaining the rank of captain in 1884.

He had been stationed at frontier posts in Montana, California and Arizona during his postwar career.

The main point of ire over Doane is an attack on the Piegan Blackfeet in northern Montana.

Doane bragged for the rest of his life about what become known as the Marias Massacre.

The Great Plains Tribal Chairman’s Association, an organization of tribal chairmen of 16 Sioux tribes from the Dakotas and Nebraska, demanded that Mount Doane be renamed in 2018.

‘This name change is long overdue. We all agreed on ”First Peoples’ Mountain” as an appropriate name to honor the victims of such inhumane acts of genocide, and to also remind people of the 10,000-year-plus connection tribal peoples have to this sacred place now called Yellowstone,’ Piikani Nation Chief Stan Grier said in a statement Wednesday.

The attack in response to the alleged slaying of a white fur trader killed at least 173 American Indians, including many women, elders and children suffering from smallpox, Yellowstone officials said in a statement.

‘But we’re not for names where individuals have been involved with genocide, where elders and children have been killed and there have been some traumatic events in our history that don’t meet standards of honor.’

This move is totally on-brand for the agency headed by Secretary of the Interior Deb Haaland. As I have noted previously, Haaland is a classic Biden appointment, selected for her minority status (Native American) and focus on progressive activism, in addition to her adherence to party over citizens. Her entire focus in the Department has been race activism.

Haaland recently spent some time in front of a Senate hearing explaining administration priorities and why her team was slow-walking oil and gas leases. There is still no word on those leases.

Meanwhile, while the Yellowstone Supervolcano does not appear to be rumbling, there was still quite a bit of shaking last year in the region.

[T]here were 2,773 earthquakes located by the University of Utah Seismograph Stations, including 10 magnitude 3 earthquakes, 163 magnitude 2 earthquakes, and 2,600 earthquakes with magnitudes less than 2. Of the total number of earthquakes, 65% occurred as part of swarms (defined as the occurrence of many small earthquakes in the same small area over a relatively short period of time). The largest swarm of 2021 included 825 events beneath Yellowstone Lake during July 15–25.

Ground deformation in Yellowstone Caldera followed trends that have been ongoing since 2015, with subsidence of a few centimeters (about 1 inch) over the course of the year. On the north side of the caldera, however, satellite radar measurements suggest a slight amount of uplift — about 1 centimeter (0.4 inches). This pattern is not unusual, having also occurred in the same area during 1996–2004.

Here’s hoping the First People’s Mountain stays at its peak for some time.

If Haaland approves enough oil leases to make the country energy independent again, I would be totally fine with her team renaming every mountain, hill, and dale.

The tribes defeated in the Indian Wars were not the ‘First People’. There were multiple waves of migration over tens of thousands of years – and plenty of slaughter and massacres along the way. I am sick of the ongoing deletions of history.

Look at the press release above: “alleged” killing of a white fur trapper but factual killing of the Indians….give equal weight to historical anecdotes with roughly equal time delay to gather facts

First People’s Mountain is as lame of a name as the Cleveland Guardians.

It also sounds a bit Soviet.

Don’t forget Washington Commanders….I think they should have named the team Washington Bureacrats or Virtue Signalers instead.

For extra points, they could have gone with Washington (Social Justice) Warriors.

I have referred to them as the DC Comics since they dropped the redskin name.

You can change a horse’s name, but you can’t force him to answer to it.
I still routinely refer to Squaw Peak and the Squaw Peak Parkway here in Phoenix, and so do the people I know.
As for the football team, I think Washington Transsexuals strikes an entirely proper note

I made sure to grab a couple of REDSKINS ball caps while I could. I have a couple of Cleveland INDIANS ball cap around here somewhere

“First people” is a lie. They were not the first. They were just the ones before us. And that’s even if we accept the misleading use of a generic “they” to mean “everyone except us”. Except that even so, there were people here first, who were unrelated to the people we found here.

Is it a hate crime to call an Indian who resells a ticket a scalper?

“The earliest evidence of humans living in Yellowstone is a Clovis point that was found near Corwin Springs, 12 miles north of the park. This artifact is made from Obsidian Cliff obsidian that is found only in Yellowstone National Park.”

“The next people or culture in western North America is known as Folsom. An Obsidian Cliff obsidian Folsom point dating about 10,900 years ago was discovered on the Bridger-Teton National Forest south of the park.”

So these last ones claiming bragging rights are maybe the 250th People. It would be more accurate to call them the Last People.

They couldn’t find a more creative and inspiring name? “Hey I got it, let’s name it after a bunch of unknown people who were defeated!”

One of the things that surprised me is that First Peoples know pretty much nothing of their own history until other people showed up and started taking notes.

Can’t name it after great people if your entire cultural memory is only as old as the oldest person.

easier to avoid offending someone by being as ambiguous as possible….pretty soon humanity will be reduced to amorphous amoeboid blobs with no gender, race, height weight, name, or other identifying characteristics.

“Let’s name it after a bunch of unknown people who were defeated!”

Because they are hoping that someday, their children will do exactly the same for them.

The Biden Administration: When you can’t manage the big, you manage the small. Pathetic.

ALMOST right: when you can’t manage the big, you MISmanage the small.

Pathetic, you can see society going to hell in a handbasket with nonsense like this.

They got this nonsense in under the door with Participation Trophies, which we knew were bad. We just didn’t know how bad.

Any culture that sacrifices its own victories and it’s own great men deserves to perish.

Our family visited Yellowstone when I was a teenager. Rumors to the contrary, that was after the Clovis people. The place was overcrowded, heavily “turista-ed”, and except for some decent fishing really not worth the effort. I understand it has gotten consistently worse. So why go to be insulted too, when you can do that by just watching network TV a lot cheaper.

Penultimate peoples. Did they replace or colonize the first peoples?

Or were they delivered by Stork at the Time of Coincidence as believed in modern families… myths.

Cool, so when are you leaving?

My choice for a name was Penultimate Colonist Mountain. This has the benefit of being accurate, meaningless drivel in line with current trends, and guaranteed to drive the woke crazy.

More racism; some can be proud and brag but others cannot.

And the ultimate insult: what they are to be “proud of” is meaningless.