“In Ashley Biden’s writings, she claims that the president took showers with her when she was young, fueling her sex-addiction.” 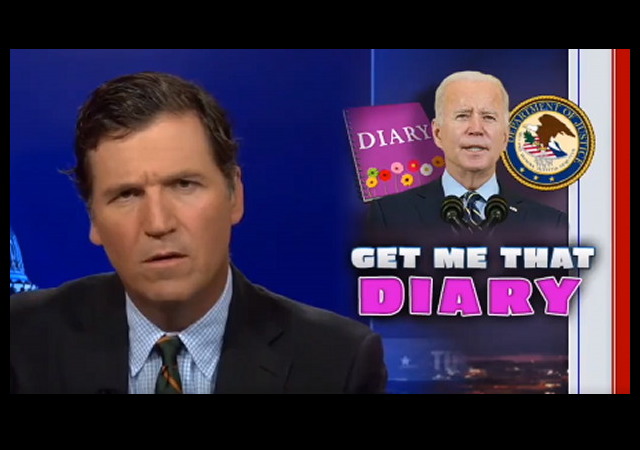 On Friday night, Tucker Carlson did a deep dive into the alleged diary of Joe Biden’s daughter Ashley which was downright shocking.

The book was discovered by a woman who took over a rehab center room that had been previously occupied by Ashley Biden and then handed over to Project Veritas.

I had heard some of the claims associated with the diary, but as I watched Tucker’s report, my jaw was on the floor.

Sarah Arnold of Townhall has some details:

In Ashley Biden’s writings, she claims that the president took showers with her when she was young, fueling her sex-addiction.

Carlson described the disturbing details as “sick” and “horrifying,” saying “if that’s not child molestation, it is definitely close enough to justify a police visit.”

Inside a January 2019 diary entry, she wrote “I remember having sex with friends @ a young age; showers w/ my dad.”

Carlson then asked the audience, “if you are the father of daughters, ask yourself, is there any explanation for that behavior that is justifiable?”

Tucker also slammed Joe Biden for using the FBI to cover up a family scandal.

He also said the president was effectively using the Feds as his secret police force, after we revealed that Aimee Harris is being investigated over Ashley Biden’s journal, which details her sex addiction and showers she had with her president father.

Carlson stated that the FBI is more interested in raiding the homes of journalists who brought these allegations to light rather than investigating the allegations themselves.

Carlson reminded viewers of his Friday night show that in November 2021, federal agents raided the home of a Project Veritas activist and the organization’s founder, James O’Keefe.

The feds were looking for a copy of Ashley Biden’s diary which they alleged was ‘stolen.’

Carlson reiterated O’Keefe’s words from the time of the raids: ‘In what world is the alleged theft of a diary investigated by the FBI? Why were they doing this?’

You can watch the whole segment below, but be forewarned. This is disturbing:

#Thread Tucker Carlson's Monologue w/ An Update On The Mystery Of Ashley Biden's Diary, The FBI's Treatment Of Project Veritas & The Claims Made In The Diary About Joe Biden@JoshTBoswell: "She wrote that she was musing over whether her father was sexually inappropriate w/ her." pic.twitter.com/zhKrswJDdT

Harmeet K. Dhillon then came on to talk more about the Project Veritas aspect of the story:

On @TuckerCarlson tonight discussing the DOJ’s unconstitutional investigation of our client, Project Veritas. The DOJ’s warrants falsely state Ashley Biden’s diary was stolen, but it wasn’t. What lies were told for these warrants to be obtained? This needs to be investigated! pic.twitter.com/VgqTR3cYgX

There is another shocking thing about this story. The media is not touching it with a ten-foot pole, not even to debunk it.

If you look at the media coverage of Tucker, almost all of it is mocking him for comparing the Colbert staffers in the Capitol to January 6th.

The media silence on the Ashley Biden story is very telling.

This has all been out there for a while. A long while.

The ‘old story’ again. How about revisting Obama’s school records and birth certificate?

Well, a famous person just said it, so I guess it is new again?

Or maybe that makes it acceptable to also say? I don’t know.

Probably the biggest lie ever foisted upon our country. If we had the truth about Obama his name would be scraped off every page of our history.

We DO have the truth about Obama. We’re just not standing up against him.

Give the fucking birth certificate bullshit a rest. The fuckers gone! Get over him already.

I mean the reality is what? What do you want to achieve? Get his 8 years cancelled? 🤣🤣

As someone once said “what’s the point”??

“What’s the point”? The point is, we don’t want history repeating itself.

Seeing how Obama’s only skill is lying and he is so good at that Democrats never question him. It’s perfectly reasonable that he cheated on his citizenship. I think that he claimed to be a noncitizen so he could obtain a scholarship.

“Get his 8 years cancelled?”

The birth certificate, although fake, was a red herring, an act of misdirection created to distract from the actual source of Barry’s citizenship. A quirk of citizenship law at the time prevented Barry from acquiring citizenship through his mother, and he was born in Kenya, so no citizenship via that route either. The phony “born in Hawaii” story allowed him to claim citizenship without revealing his legit claim to citizenship – through his father. His father was a US citizen, Frank Marshall Davis, a known communist. Imagine how difficult, even impossible, it would have been (at the time, probably not insurmountable today) for Barry to rise as he did if it was generally known his dad was a commie.
Birth certificate: Fake
Citizenship: Yes
Obama was a legit president, on that count, although a liar and deceiver through and through.

So what age was she when she took showers with her dad? 2 & under would be OKay. Otherwise, child abuse!

The status change was a result of a ratings discovery.

Drunk driving had a similar revision, from a personal moral failing to a public problem, in the late 50s.

Sociologist Joseph Gusfield studied the latter, noting the route to political power: discover a new public problem and then take ownership of it.

All this leaves people brought up before the transition baffled by the public fuss things suddenly get, where panic had always been absent when they were growing up.

Ian Hacking did the study on child abuse that I remember
https://www.journals.uchicago.edu/doi/abs/10.1086/448583?journalCode=ci

Pedophiles make very bribable politicians: which is why so many bad actors support them. On type is Hillary Clinton: so thoroughly compromised, she’s like a mangey dog on a very short leash.

Making child abuse a public problem was part and parcel of the drive to destroy the nuclear family by removing fathers from the family home. Paint all men as potential pedophiles and rapists, make women fear them, and add a bit of “if it saves just one child” and you have family court judiciary primed to implement your agenda.

Given systemic child abuse and child sexual abuse in children’s homes and other locations in multiple countries I’m happy that it’s now a public issue.

Abusing children leads to broken adults and is a clear causatory factor behind further child abuse. We’re not going to stop this by hiding it.

All this says world’s about his trashy wife Jill, doesn’t it. Talk about garbage sticking to 100 dollar bills…

Coming soon to a Disney-approved theater near you:

“The Never-Ending Story of Potatus Brandon”

I wish I could say I thought of it first but I stole it. And I’m not giving it back.

Potato Of The United States.

Why do you think the media and Hollyweird are pushing to normalize pedophilia?

Why do you think they’re hell-bent on sexualizing children?

How old was Ashley when this happened?

Alleged entries in what is alleged to be the alleged Ashley’s alleged diary.

The diary’s credibility is significantly enhanced by the FBI claiming it was stolen and using that excuse to try and retrieve a copy of it.

Although it’s possible that the FBI were merely contriving an excuse so that they could illegally search Project Veritas.

But we’re now merely discussing how corrupt the FBI are, rather than whether.

I wouldn’t be surprised if there is an “entry” on the “alleged entry” into Ashley by Brandon in there too.

I have to believe there’s something in there that causes them great concern.

So maybe this is why the DoJ has been pushing this so hard eh? What else is in the pedophiles daughters diary??

So maybe this is why the DoJ has been pushing this so hard eh?

The narrative that the diary is fake notwithstanding, DoJ action pretty much verifies the diary’s authenticity, doesn’t it?

A copy of the diary has been available on the internet for like, a year or so. Why talk about this now?

Why not talk about this now? It hasn’t been resolved. Why hasn’t it. People need to be reminded now and then about what has gone by without resolution, to raise, once more, questions about they it hasn’t been resolved. Officialdom must be held to account. That can’t be done without constant hounding. This means these matters must be raised periodically.

So anything that didn’t happen yesterday or in the past, like, year is irrelevant? Should be memory-holed, buried? That kind of limits . . . everything, no? I mean can we really talk about what Biden is doing now without talking about what Obama did during his time in office? Or is that, like totally, too long ago, and only this minute in time (or past, like, year) matters in any way? Sorry, as a history buff and political commentator, I find that problematic and kind of odd. But then, I do love history, so I can’t understand people who don’t care about anything that didn’t happen this week (or year).