Incitement to violence and stoking Antisemitism by blaming almost the entire Jewish community for the problems of non-whites in the U.S. and around the world. 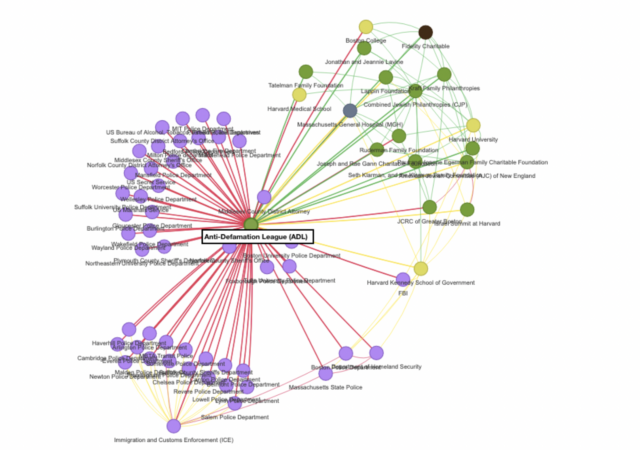 An anonymous group calling itself the Mapping Project has created an elaborate interconnected map of Jewish community leaders and groups who, like the vast majority of American Jews, support Israel. The Map implicitly serves as a target list, leading to widespread condemnation.

The Mapping Project’s self-described “multi-generational collective of activists and organizers” runs a website purporting to connect pro-Israel Jewish billionaires – and any Jewish (and non-Jewish) institutions to which they donate – to oppression of Palestinians and of minorities in the U.S. As the website’s title suggests, it maps the locations of these supposed Jewish “oppressors” and lists specific addresses.

Nearly all Jewish organizations are Israel supporters and therefore are guilty of being “Zionist”, therefore supporters of colonialist supremacy. In other words, Jews who support Israel are guilty. They are Bad. What’s worse, their tentacles are everywhere.

Lest there be any doubt, the Mapping Project is totally opposed to the very existence of the state of Israel. “Support for the continued existence of a colonial-settler state anywhere in historic Palestine, or for colonial-settlers continuing to hold land there – whether on land colonized through various processes before 1948, land on which a settler-state was declared in 1948, or on land under occupation and colonization since 1967 – is Zionism,” i.e., white-supremacist colonialism.

The project’s priorities are as distant from reality as those of other contemporary left-wing movements like “defund the police,” and of “reform”-minded district attorneys like the recalled Chesa Boudin. For example, a Mondoweiss article authored in the name of the Mapping Project repeatedly condemned policing but referred to crime only as a made-up excuse for criminalizing protest movements. The reality of violent crime – not to mention theft and other lawbreaking – is completely lost on the project’s authors.

The Mondoweiss article hysterically describes police counterterrorism actions after 9/11 and after the Boston Marathon bombing as nothing more than “militarized violence” designed to oppress rights protestors. It says nothing about actual terrorist violence, except to deny the malevolence of terrorists like Usaamah Rahim and David Wright, who plotted to behead police officers and Pamela Geller. In particular, the project denounces the ADL for its work connecting American police with their Israeli counterparts in order to learn from Israeli experience fighting terrorist violence, which many leftist anti-Semites have branded “deadly exchange.”

Exactly who is behind the project is a mystery. Its website does not identify any of the people working on it (or funding it). The article it placed in Mondoweiss was published under the byline “The Mapping Project” – again, no names.

BDS Boston tweeted an enthusiastic endorsement of the project. Its tweet was retweeted by the anti-Israel Jewish Voice for Peace in a subsequently-deleted post. It was also retweeted by Greater Boston Tenants Union, which in turn was retweeted by Massachusetts Peace Action.

From our friends at the Mapping Project! Their map and articles illustrate how local support for the colonization of Palestine is structurally tied to policing, evictions, and privatization locally, and to US imperialist projects worldwide.
Check it out: https://t.co/HpNaCvxUXS pic.twitter.com/fzyFP5uERE

What are the concrete ways we can ensure our organizing has a revolutionary orientation? This map illuminates connections between real estate capital and the imperial power structure in the Boston area:https://t.co/jx0mYHOY7m 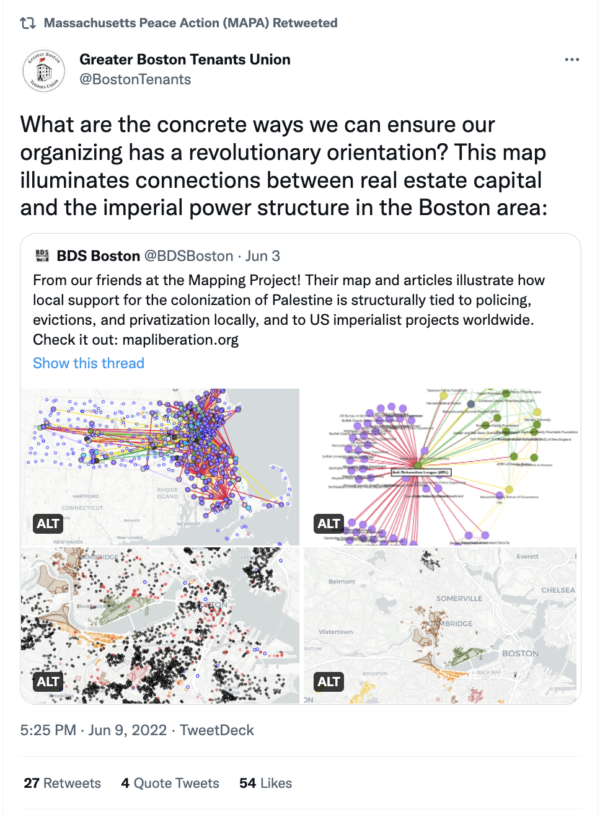 Given BDS Boston’s lead role in publicizing the Mapping Project, and the latter’s subject matter, one wonders what exactly the former’s role is. Is the Mapping Project an astroturfing project of BDS Boston? Like the anti-Israel letters to Google and Amazon supposedly sent by “anonymous staffers,” but actually sent by anti-Israel groups including Jewish Voice for Peace and M Powerchange.org? The project’s timing coincides with BDS Boston’s ratcheting up its obnoxious behavior with a call to “dismantle” Boston’s Jewish community.

Shame on @BDSBoston for calling to "dismantle" Boston's Jewish community. Thank you @ADL for this strong statement.

The Zionist Organization of America (ZOA), one of the organizations targeted by the project, has condemned the project as “targeting and promoting of violence against American Jews and Jewish schools, charitable organizations and other institutions” in a letter to US Attorney General Merrick Garland and FBI head Christopher Wray. The letter urges them to “investigate and monitor all these antisemitic hate groups and their leaders, and to prosecute them consistent with the evidence and the law.” It adds, “Law enforcement needs to ensure that Jews and Jewish institutions in the Boston area and around the United States are safe and fully protected.” The Boston Herald reported that the FBI was looking into the website, but added, “At this time, we have not observed any direct threats of violence in open sources related to this map as of its publication.”

The ADL was been prominently targeted by the Mapping Project. ADL leader Jonathan Greenblatt condemned it in an op-ed. As per usual with him, he could not resist the temptation to bash “far-right extremism” as “singularly lethal,” even as he grudgingly acknowledged that the “organized anti-Zionist movement” is “no less conspiratorial and antisemitic.” The ADL also forwarded a tweet from its local New England chapter condemning the project.

The Mapping Project propagates the worst kind of antisemitic targeting of the Jewish people & seeks to intimidate us. It’s all about inciting others to take actions, potentially violent, against the Jewish community. More from ADL's @rtrestan on this dangerous project. ⤵️ https://t.co/QGqoyt3k4P

Several congressional representatives have condemned the project for spreading anti-Semitism. They include Sens. Elizabeth Warren (D-Mass.), Ed Markey (D-Mass.) (both of whom are listed on the website – here and here), and Brian Schatz (D-HI), as well as Reps. Lee Zeldin (R-N.Y.), Jake Auchincloss (D-Mass.), Seth Moulton (D-Mass.), Ritchie Torres (D-N.Y.), and Carolyn Maloney (D-N.Y.). Rep. Ayanna Pressley (D-Mass.) also condemned the map. Although she is a member of the “Squad”, which is highly critical of Israel and at least one of whose members – Rep. Ilhan Omar (D-Minn.) – has made openly anti-Semitic remarks, and despite having been endorsed by Massachusetts Peace Action which is promoting the map, Pressley has previously broken with the Squad and stood up to anti-Semitism, as when she supported a resolution opposing the Boycott, Divestment and Sanctions movement (BDS). State Sen. Jason Lewis (D-Fifth Middlesex) also condemned the project.

This is horrific and dangerous, and will imperil people. https://t.co/CW50gVAaBu 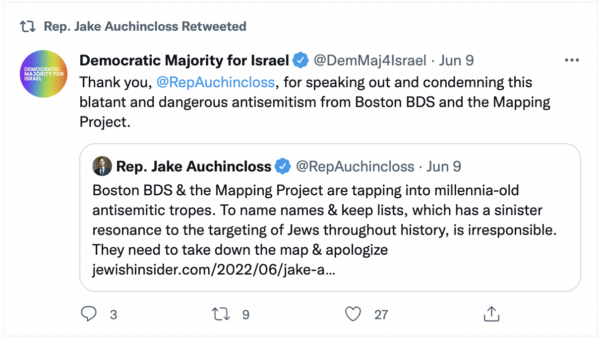 Rep. Jake Auchincloss retweeted a condemnation of the Mapping Project.

Targeting the Jewish community like this is wrong and it is dangerous. It is irresponsible.

This project is an anti-Semitic enemies list with a map attached. https://t.co/EiphRchk5l

The BDS movement put together “a mapping project” that accuses Jewish and “Zionist” institutions of various evils in American society.

BDS is anti-Semitic through and through, and I will ALWAYS condemn those who condone and take part in it.

I stand with Ritchie in speaking out against this disgusting and hateful act. https://t.co/Mqsn2DSFBQ

The Mapping Project offers a fine illustration of Rabbi Lord Jonathan Sacks’ comment that anti-Semitism mutates. Whatever society considers most objectionable, not to say loathsome, is projected onto Jews. Anti-Semitism:

Its mutating nature is part of the reason for the lag time in appreciating contemporary anti-Semitism for what it is. Today, it is very often expressed as hatred of Israel for all sorts of nonsensical reasons, and from there, to casting Israel supporters out of society. Get the irony: Jews were persecuted for centuries as outsiders, without having a state of their own to protect them. Now that they have a state of their own, that state is persecuted for existing.

But old forms of the virus haven’t disappeared. Jews are still frequently presented as super-rich individuals using their wealth to control the world. The Mapping Project has succeeded in weaving both of these strands – old and new anti-Semitism – together to underpin its map.

Ah yes, one of my favorite Marxist tropes… coming from an assumption that all wealth belongs first to the state, not to the person/company who generated it.

Fuck off, you slaving fucks.

Who’s behind it? That should be no surprise.
It’s the Reform Jewish movement. Reform Judaism is a combination of Marxism, Socialism and Judaism and is very militant and destructive.
Reform Jews are anti-capitalist, anti-American and most surprisingly, anti- Jewish, at least in the traditional sense.

The anti-Israel tweet from “JVP” (“Jewish Voice for Peace”) is an example.

No exaggeration, no hyperbole: this is how fascists do it.

Hey, let’s pick McConnell to lead the next GOP senate! Or Romney! Etc!

Years ago before i had a computer i had some questions about Judaism as i was traveling about the Midwest so i thought i will find a synagogue and a rabbi. i thought they would be in any large community but could find none. i just thought there were too few to have a regular facility. Maybe they have learned from the past.

Only this time around it won’t be just the Jews. Christians are already becoming targets. Be ready. It’s coming.

I just got through reading “Fox’s Book of Martyrs,” or as much of it I could stand. If you want to get an idea of how many varied ways there are to torture people, download it. It goes into frightening detail and I couldn’t finish it.
.

The vile Dhimmi-crats are the new National Socialists, as far as I’m concerned. They’ve consciously and gleefully embraced Muslim Jew-haters, Black Muslim Jew-haters and white, non-Muslim Jew-haters, with equal fervor. And, the Dhimmi-crats’ decades-long propagation of, legitimization of, and, deference towards, Muslim supremacists’/terrorists’ contrived and fallacious victimhood propaganda mythologies, combined with their attempts to erase/ignore Jews’ historical ties to the middle east (ties which predate the supremacist and totalitarian ideology of “Submission” by millennia) and paint them as alleged colonial “occupiers” represent a transparently evil attempt not just at brazen historical revisionism, but, an attempt to rationalize and justify Muslim terrorist violence against Israeli Jews.

The vile Dhimmi-crats are complicit in, and, are willfully engaged in, the Left’s contemporary vilification of Jews and of Israel.

This is anti Semitism in its rawest form as set forth by the intersectional left.

among the cartographers on this planet would suspect that mossad are among the very best–unlike our boys and girls however, mossad DOES reach out and touch folks