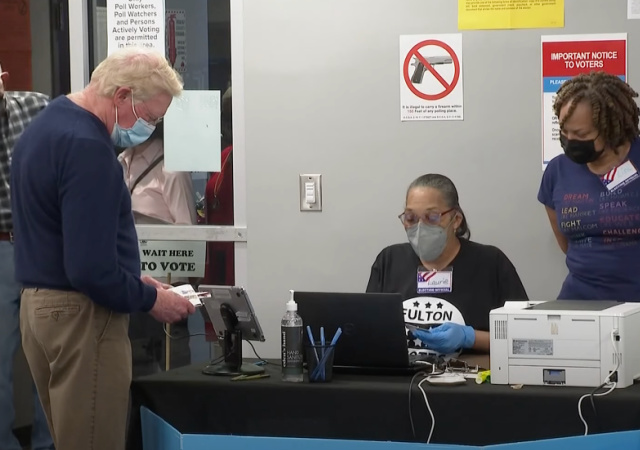 Stacey Abrams and other lefties have a ton of eggs on their face. Remember when they screamed the new Georgia voting law would restrict minorities from voting? The Republicans want to make it as hard as possible for minorities to vote!

Jim Crow 2.0, y’all. MLB even moved its All-Star Game from Atlanta to Denver over the law.

Even The Washington Post admitted this weekend that the law has not affected anyone’s ability to vote.

Dying, you guys. Dying. From WSBTV:

More Georgians went to the polls during the 2022 primary elections early voting period than ever before, according to the Secretary of State’s Office.

Georgia Secretary of State Brad Raffensperger announced over the weekend that the three-week voting period saw voters show up in record numbers.

In total, 857,401 Georgians cast their ballots ahead of election day. Nearly 93% of those ballots were cast in person. The remaining 7% were cast absentee.

Both parties have seen a surge in early voting:

The Washington Post interviewed some people who still believe the law has affected people’s ability to vote. But buried at the end of the article, of course, is an interview with one woman:

Patsy Reid — 70 years old, Black and retired — said she was surprised she didn’t encounter problems when she voted early this month. Reid cast her ballot for Abrams in the Democratic primary but feared that her vote could be discounted given reports of voter suppression against people of color in Georgia.

“I had heard that they were going to try to deter us in any way possible because of the fact that we didn’t go Republican on the last election, when Trump didn’t win,” Reid said. “To go in there and vote as easily as I did and to be treated with the respect that I knew I deserved as an American citizen — I was really thrown back.”

While WaPo admitted that early voting has gone up the authors filled the article with doubts from people. One man said the law made it hard for him to vote because he didn’t want to take any chances with the mail-in ballot. So the man voted in person.

The man could not vote the way he wanted to but still easily voted. In other words, it did not suppress his vote.

Stacey Abrams, who hopes to win a second term as governor (sarcasm, you guys!), called Georgia the worst state. Now there’s proof she dissed the state’s voting laws for nothing.

I hate early voting. I hate mail in voting. Both are very prone to fraud. One day, vote in person and count on site with small precincts makes security much easier to do.

Early voting is much better than mail-in voting.

Early voting actually allows one to count the ballot and ensure it is from a registered voter. If that same voter tries to vote again, it will be VERY easy to catch.

It’s actually easier to sneak a bunch of ballots in when everything is a scramble (or when you have a lackey judge like Emmett Sullivan).

Even third-world nations, under UN supervision no less, promote the no one votes without leaving with an indelible marked finger. In America, we follow the progressive trust and creative count system of election preference constructions.

I think that has been proposed here but there were objections, Mark of the beast among others.

Fine. Those who object have the option of not voting.

Um… “indelible” here is a very loose term. Like “permanent wave.”
In a few days, it’s gone. The Mark of the Beast has staying power.

Georgia is a red state with blue lesions. I don’t get the whole early voting thing. A tennis friend told me, proudly, that she and her husband went to vote last week. SMH. Tomorrow, peeps..I will vote here in GA. First time.

“ Georgia is a red state with blue lesions.”

I’m reading about Lenin and Marxism now, I’ve never really studied the subject directly. One thing that Lenin and subsequent followers did (do) is blatantly say something that could be absolute BS, and even if you told them to their face how wrong they were, it didn’t matter. They don’t give an inch. They do and say anything to advance The Cause. What normal people would consider a flaw or bad ethics, even breaking the law, they look at as weakness. Telling lies is a virtue to these people.

They do not care about being wrong. They don’t even care about being right. They will pretend they never said what they said, they will change the subject, they will ignore anything that makes them look bad, all the while, trying to keep their boot on your throat. Whatever it takes to keep it there, they will do it.

No one on the left is accountable for anything. Unless you are a leftist who strays off the reservation, then you are pilloried. But lying about the voter law? Never happened. (R)s are racists, case closed. Next crisis, please.

I like early voting BUT it can be abused. In my district I show ID and I’m checked off their list. I go early and no one can vote for me by mail before Election Day.

I’ve only been a Nevada resident for a little over a year. I was shocked to discover recently that every registered voter receives a mail in ballot unless they apply to vote in person. What?! Of course I immediately applied to vote in person. I’ll be curious to see how much company I’ll have in November. By the way if you apply within a two month window you cannot change your preference for the coming election. It only kicks in after that. Weasel politicians.

That’s gonna leave a mark. An increase of 168% would seem to put to rest the ‘suppression’ narrative.

Why? When has reality ever governed whether a narrative is advanced or whether the NPC’s absorb and regurgitate it?

The NPCs ain’t the target audience so don’t focus any refers on educating them. It’s the ‘independent’ voter who is swayed by narrative and counter narrative.

Shows how easily low info voters can be manipulated.

Since when did the communists ever care about facts?

Vote early and vote often.
I’d love to see her chonkyness with a Mike Tyson smile get busted for fraudulent votes.
It will happen. Question is…will we knof when it happens?

I wish somebody would punch that lying whore in the mouth, and keep doing so until she shuts the fuck up and goes away. I’m sick of looking at her ugly fat ass, and listening to her fucking lies.

No guns allowed, but wield your scalpels if you got them. And the progressive art of masked spread over time, place, and population.

They may have indications that the number of voters has not been suppressed. Now I would like some proof that the votes have been counted and reported in accordance with how they were cast and not to give the numbers that the powers that be want.

Funny how those who accuse of voter suppression without hard evidence are never accused of trying to overturn an election.

Since Stacy (The Tank) Abrams is so disgusted about living in Georgia, she should move elsewhere. I would volunteer to help her pack and donate to the cost of a U-Haul.

I Just got home from voting in the Georgia primary. Herschel is the MAN!!! I proudly voted for him.

More proof that communists never get anything right.