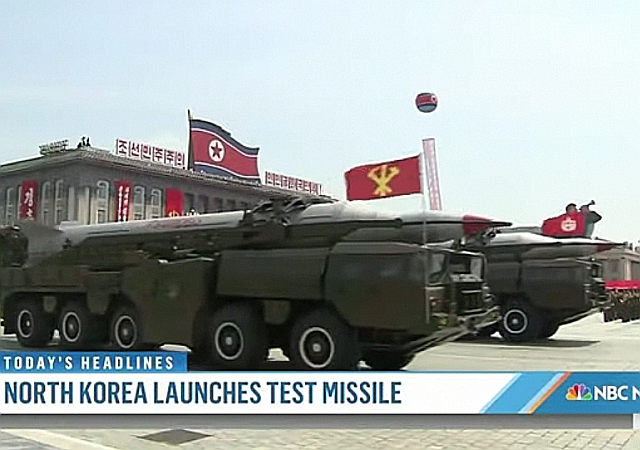 The North Korean launch is the latest in the series of long-range missiles tested this year by the regime, including a hypersonic weapon that reportedly hit a target over 600 miles from its shore. In late March, North Korea launched a so-called “monster missile,” which the regime claims “to be the world’s largest road-mobile liquid propellant intercontinental ballistic missile.”

Last week, Kim paraded his massive missile arsenal in the capital of Pyongyang and pledged to develop nuclear weapons at the “fastest possible pace.”

North Korea has fired a ballistic missile toward the sea off its east coast on Wednesday, South Korea’s military said, about a week after the North vowed to develop its nuclear forces “at the fastest possible speed.”

Japan’s Coast Guard also said that it had detected what appeared to be a ballistic missile fired from North Korea, and that the projectile had already landed.

Details of the projectile, including its flight range and altitude, were not immediately available.

The latest launch came less than three weeks after the North fired a new tactical guided weapon on April 16 aimed at boosting the country’s nuclear capabilities.

Pyongyang has recently stepped up weapons tests, resuming long-range missile launches for first time since 2017 in March. Officials in Seoul and Washington say it may also be preparing for a new round of nuclear tests.

North Korea’s announcement to ramp up its nuclear arsenal comes as President Joe Biden’s administration fails to stop Iran from racing towards a nuclear bomb.

After spending nearly 12 months in talks to restore the Obama-era deal and making numerous concessions to the Iranian regime, the Biden White House has failed to stop Tehran from advancing its rogue nuclear program. Iran used this time to raise its stockpile of near-weapons grade uranium and develop its nuclear weapons capabilities.

The Biden administration’s weakness on the world stage has also emboldened China as its military steps up naval exercises near Taiwan amid Russia’s ongoing invasion of Ukraine.

Following the Russian offensive against Ukraine, Taiwan could turn into the next conflict zone as the Chinese Communist Party (CCP) threatens to annex the island nation it regards as a renegade province.

Ha! There will be no [North] Korean Spring.

It looks like Kim doesn’t fear anything from the pedophile-in-chief either.

Message to Kim: nuke DC, and we’ll call it even.