Meanwhile, the country is dealing with a shortage of critical appliances. 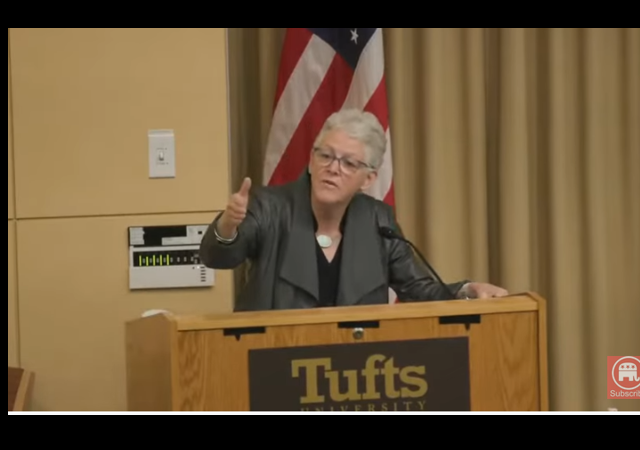 Longtime Legal Insurrection readers may recall that Gina McCarthy was Obama’s Environmental Protection Agency head when EPA-bureaucrats fumbled their unleash the Animas River environmental disaster, which resulted in the release of millions of gallons of heavy-metal containing wastewater into a scenic Colorado river.

She’s back and worse than ever as Biden’s climate-activism advisor. Recently, McCarthy chortled over 100 new rules the administration plans to impose on appliances.

The airlines are "gonna be out of here" if they don’t follow Biden’s Green New Deal-style rules. pic.twitter.com/AKI7InJDBw

A new efficiency rule proposed in March targets residential air conditioners and pool heaters, while the department finalized regulations in April to phase out the manufacture of incandescent light bulbs.

The current head of the Environmental Protection Agency (who, as I noted previously, is a green-justice warrior) indicates that rules focused on hydrofluorocarbons used in refrigeration systems will include relying on new, alternative technologies that they seem to think will guarantee a green utopia for this nation.

EPA Administrator Michael Regan said the phasedown is backed by a coalition of industry groups that see it as an opportunity to “supercharge” American leadership on domestic manufacturing and production of alternative refrigerants. The industry has long been shifting to the use of alternative refrigerants and pushed for a federal standard to avoid a patchwork of state laws and regulations.

“This action reaffirms what President Biden always says — that when he thinks about climate, he thinks about jobs,” Regan said, echoing a Biden refrain about climate change. Transitioning to safer alternatives and more energy-efficient cooling technologies is expected to generate more than $270 billion in cost savings and public health benefits over the next 30 years, Regan said.

A pandemic relief and spending bill passed by Congress last December directs the EPA to sharply reduce production and use of HFCs.

And as the Biden administration is poised to unleash new requirements on appliances, the nation is suffering appliance shortages.

[Angela Warner, Appliance Specialist and Spokesperson at Warners’ Stellian] says, like the auto industry, some manufacturers are waiting on microchips before shipping some of their products. She says others have hit snags with specialty parts, such as insulating foam for refrigerators, and that’s just where the explanations begin.

“Some say that they’re waiting for truckers to drive them to us, or that there are products waiting in boats at ports that can’t get unloaded,” Warner said. “They were also affected by labor shortages within their own factories making products.”

If that doesn’t sound like an easy fix, you’re right.

“We kind of thought it would be over soon, but it’s looking like it’s going to be lasting through 2022,” Warner said.

Biden’s bureaucrats clearly are cut from the same cloth as their boss. Never doubt their ability to muck things up.

This should burden Americans even more than Biden’s energy policies. Another Biden goal.

“It isn’t so much that liberals are ignorant. It’s just that they know so many things that aren’t so.”

It is here intention to destroy America and replace it with a fascist Federal bureaucracy that will ensure the people of this country are weakened to the point where they cannot resist.

Appliance prices have risen far faster than inflation in recent years, to the point that they are not affordable. This will make that problem much worse.

They hate you and I. We stand in the way of their graft, cushy jobs and psychotic fetish with control over OTHER people’s lives.

The legislative branch is so terrified of making a call they keep letting the bureaucracy take power. That way they get their graft and the bureaucrat is unaccountable.

— Participated in by the GOPe.

I sure picked the wrong time to self-identify as a toaster.

What are your preferred pronouns?

I want to have some buttons made up that say “My preferred pronoun is Dr.”

Now that’s a funny one!

I don’t think you are covered under the Constitution but the green nazi army certainly wants to have words!

the tiny / minute reduction in (non) greenhouse gases is greatly overwhelmed by the additional pollution from the more frequent disposals of the appliances.

As long as you use your appliances while flying on your personal jet to a Global Warming Convention you will be allowed to use non-compliance equipment.

I know people that wash their dishes twice because the environmentally friendly dishwasher they bought doesn’t.

“Muck thing up?” You misspelled, well, you know.

Like how it has almost singlehandedly prevented famine and food wastage since being introduced? How many lives were saved in extreme environments?

Let her (yes, I am assuming the gender) run hers on windmills in her backyard.

Whenever Biden goes anywhere he uses at least 20 gas guzzling vehicles in his motorcade and on occasion has used up to 85 vehicles in his convoy—but that’s not a concern of McCarthy’s. The problem is my refrigerator.

At this point, McCarthy is about as useful as a old refrigerator. And he should be scrapped like one.

When the entirety of them eat raw vegetables and wash their clothes in a river I just may listen.
Until that happens these idiots need to live in fear.

This woman is not only uncaringly evil about the harm she causes, she intentionally seeks to destroy families and industries all the while being a parasite on the tax payers.

You can bet she’s living large, though – and on our money.

“rules focused on hydrofluorocarbons used in refrigeration systems will include relying on new, alternative technologies”

Does that mean the patent on DuPont’s refrigerant is expiring? I wonder who will come up with the next patented “new alternative technology?”

Both LNG and LP make great refrigerants, though leaks can be a big problem:)

As Lenin’s hero, Chernyshevsky, used to say, “The worse, the better.”

The sooner we get rid of these Fascists the better.

It’s easier to get rid of bedbugs than a facist tick who has dug in.

It’s going to take a series of wins at the presidential level to troy out the rot. In the meantime the Congressional Review Act ensures that the rules the bureaucracy makes can be eliminated, if our so called r leaders can muster up enough votes.

More precisely muster up the courage to attend the vote and be willing to actually accomplish something instead of talking about what they would do ‘if only’ or spending time selling out to foreign or corporate interests.

The appliance shortage was bad enough last fall; I’d hate to think of it getting worse. We moved to TX last September and for some inexplicable reason rental houses here do not come with a refrigerator. We had to wait three weeks for one to be delivered. Try keeping your perishables in a picnic cooler for that length of time. Even with the “super duper keeps things cold for five days” model we were still buying 20 lb bags of ice every other day. Not fun.

I’ll cut to the chase. If your appliances work consistently to the standard they were manufactured to meet and you are pleased with the results get ready to do whatever you need to keep them going. They will be the last of their kind.

You can’t win any elections by committing economic suicide…unless of course you don’t plan to win.

They plan to cheat. It has worked well for them so far.

I just had to buy a fridge. First 5 I picked at a box store were out of stock. Ended up getting a dented return. I’m sure this nut will make that better.

BTW: I drive a truck. You know why there are companies that can’t find drivers? Rules and regulations like this coupled with low pay. Why low pay? Take a look at the $5.50 diesel and the regulatory cost that has not only driven the price of equipment up but also cost of compliance. Companies can’t afford it. My fuel pump went out and it took 3 weeks to get a replacement.

These aren’t energy efficiency standards these are energy use standards. Only the ignorant and the mendacious say those are the same thing.

A friend is an owner operator. His tractor needed a repair, but it’s going to cost $10,000.00 and the part won’t be available for at least six months. He’s driving for a company right now and not making near as much he did with his own truck.

BUT it takes energy to manufacture these appliances, and appliances that comply with these regulations tend to be more complex and thus more likely to need repairs even as these repairs themselves become more difficult and therefore more costly. Yet somehow I doubt that these “you will build it as we decree it!” commissars understand this linkage.

“Hey, why can’t we decree a ten-milliliter-per-flush toilet? Think of all the water that’ll save!”
“But what if it doesn’t work?”
“It must work: this here requires requires that it do so!”

So why not demand that airliners incorporate anti-gravity? Think of how much more efficient they’d be if they didn’t have to use wings to generate lift!

(Sigh). Yes, it’s tough being a commissar who can just stomp her feet and demand the world work as it should!

Actually, they know it* will not work. That’s the point.

*sub in anything subject to marxist government regulations.