“Phrasing like *pregnant people* or *people seeking an abortion* seeks to include people who have those experiences but do not identify as women, such as transgender men and some nonbinary people.” 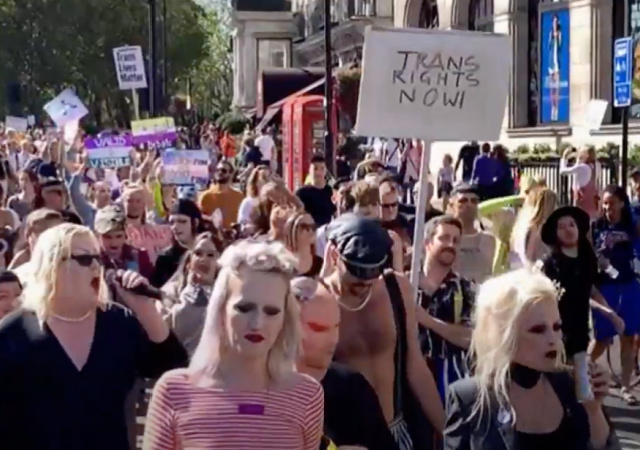 It never fails to amaze me how often dictionary publishers alter their definitions of certain words and the Associated Press Stylebook updates their guidance on the use of certain terminology whenever Democrats are on the ropes, have made themselves look foolish, and need an assist.

For instance, in September 2020 after several months of violent looting and rioting in Democrat-run cities by Antifa/BLM-led “protesters,” the AP changed their guidelines to suggest the use of the word “riots” was incorrect when referring to the Black Lives Matter riots, claiming “riots” had “been used in the past to stigmatize broad swaths of people.”

Instead, they recommended terms like “unrest,” “revolt,” and “uprising” to describe “protests” and “demonstrations” that they acknowledged “can be legal or illegal, organized or spontaneous, peaceful or violent, and involve any number of people.”

Conveniently, just a few months earlier as the George Floyd riots and looting sprees were just beginning to take place, a reminder was posted about how it was important to “limit” the use of the word “looting” because it supposedly carried “racial overtones” with it:

In April 2013 under then-President Obama’s administration and at a time when illegal immigrants were pouring over our southern border like Niagara Falls, the Associated Press banned the use of the term “illegal immigrant” in their reporting:

The Stylebook no longer sanctions the term 「illegal immigrant」 or the use of 「illegal」 to describe a person. Instead, it tells users that 「illegal」 should describe only an action, such as living in or immigrating to a country illegally.

Except in direct quotations, do not use the terms illegal alien, an illegal, illegals or undocumented.

And right on cue, just two days after the story that recently broke about the Supreme Court leak regarding the draft majority opinion written by Justice Samuel Alito in which he declared that “We hold that Roe and Casey must be overruled,” the AP has made some style changes to how they refer to pregnant women:

There was also this from earlier this week:

Use the modifiers anti-abortion or abortion-rights; don't use pro-life, pro-choice or pro-abortion unless they are in quotes or proper names.
Avoid the term abortionist, which connotes a person who performs clandestine abortions.

None of this is coincidental, of course.

At first glance on the “pregnant people” guidelines, some might think “well, this is the right approach to differentiate stories specific to women born women versus stories specific to transgender men and ‘binary people.'” But what happens when these stories intersect, which is often the case? You better believe they’ll use “pregnant people” as the default because they want to appear inclusive and woke, regardless of how in doing so it helps erase women from the public discourse over time.

And as for stories specific to pregnant transgender men, why not just refer to them as “pregnant transgender men” instead of “pregnant people”? Perhaps because even the Associated Press knows how ridiculous that will sound (even more so than “pregnant people”) to the average reader of their news reporting, most of whom know that actual men cannot bear children. That will lead to a number of uncomfortable questions and comments from readers that they don’t want to answer. Case in point:

Well. Time to mute this.

Relatedly, the Associated Press’ virtue signaling about “pregnant people” comes at a time when many Democratic “leaders” have conveniently re-embraced the use of the word “woman” to describe women, while others like California Gov. Gavin Newsom apparently have forgotten the absurd and unscientific talking point about how men can get pregnant:

If men could get pregnant, this wouldn’t even be a conversation.

This decision isn’t about strengthening families – it’s about extremism. It’s about control.

We will fight for the right to choose. pic.twitter.com/Yky1Q3RNqJ

On the other hand, some female members of the party that like to proclaim they are defenders and protectors of women have chosen to be complete sellouts to their gender with the use of words like “birthing bodies”:

Birthing bodies have the right to freedom.

Deciding if or when to become a parent is one of the most personal, life-changing decisions. Access to abortion & reproductive care is a decision we must trust each person to make based on what’s best for their health & their future.

Oh well. At least she didn’t refer to them as “bodies with vaginas” or “bleeders” as other supposedly “progressive” women have.

All of this is gaslighting in the extreme, which the hard left was getting away with as recently as a couple of years ago but not anymore as the cultural shifts in this country are favoring conservatives. Also, an increasing number of people are refusing to be gaslit and are more frequently calling this stuff out on social media (“Harry Potter” author J.K. Rowling comes to mind as one example) and bringing it to the attention of people who otherwise might look away.

In response to the news of the AP revising its guidelines on how to refer to pregnant women, one frustrated Twitter user had the following suggestion:

It is time for news publishers with integrity (and common sense, eg @wsj) to abandon the AP Style Guide

You mean birthing people who don’t want to give birth?

Who practice reproductive rites for social, redistributive, clinical, and fair weather causes. In Stork They Trust.

Only WOMEN can get pregnant. Anything else is a LIE.

You are looking at this the wrong way. These wackos wanted to change definitions so now they can live with the consequences. Every time the proponents of gender ideology use a traditional term, Man or Woman, they should get asked when they become trans phobic.

Make them twist themselves into knots to keep suburban wine Moms onboard with their agenda when they wackos want dudes in their little girls locker room or taking their spot for an athletic scholly opportunity. Do not let them out of the trap they created for themselves.

The AP style book recognized the problem and is attempting a rescue but it’s so untethered that the kool aid drinking true believers will be bitching about it because it doesn’t maintain consistent observance of the new orthodoxy of trans/nonbinary/gender fluidity.

Doctor: How did you get pregnant?

Ilhan Omar: Somebody did something.

Unless she brings a biologist to the appointment, there is no one around to properly explain this to the doctor (and remember he’s just guessing at gender anyways).

You don’t think being a trans is tough?
Dozens of years being male, then finally had the money and free time to make the switch.
Then suddenly, for no reason at all, discovering yourself pregnant and desperately needing an abortion!
I didn’t spend all this time and effort just to get pregnant! I had no idea women got pregnant! I need “pregnant persons’ health care!”
Cater to me!

Ok….. If someone is pregnant then they are obviously female, and human females are known as women. What are these brain-donors thinking?

And has it occurred to them that the condition that they think makes an abortion necessary is actually preventable? They want full control of their bodies, but abdicate any control in a pursuit of fun….. but want it back when that fun doesn’t work out exactly as they imagined it would. Its just another stanza of the song about “we are equal and demand special considerations to be equal”.

Why will people not take responsibility for their actions?

The A.P.’s style is suffocatingly cloying and dishonest. They have become experts at propaganda. Too bad. It would have been nice if they had chosen to do news, instead.

AP: No longer use the term journalist. Instead use liar or deceiver.

I am happy to exchange “invader” for “illegal immigrant.”

Likewise, I will use “abortion enthusiast” instead of “abortionist.”

More than happy to use “invader”, as the US Constitution says the Federal government is supposed to protect the states against invasion.

“Except in direct quotes essential to the story, use illegal only to refer to an action, not a person: illegal immigration, but not illegal immigrant. ”

The appropriate phrase is “foreign invader”. We are either a sovereign country with borders, or we are not. Associated Press believes not.

I use feral human instead of homeless.

I see this sort of thing and the demonstrations at the homes of the justices and wonder: Do I want to survive whatever it is I have the put me in the hospital? I really wonder…

Its always darkest before the dawn Mr. Griz. Dont let these unruly pissants get you down; their day will come. Citizens are getting sick of the five percent lunatics whining and crying every time something goes against their insane beliefs.

They have been “getting sick of them” for a very long time. But, I guess if there’s good sports on TV, that’s more important.

You weren’t experiencing what I’m experiencing. It’s been a bad last five years, and I’m watching the country I grew up in going from a dynamic thriving country into equivvering mass that’s being held hostage by 5% of the population maximum.

For a short time you used the name “Retired Viking.” As a Viking you are familiar with the saying: “The north wind made the Vikings.”

Wherever did we get the idea that secure and pleasant living, the absence of difficulty, and the comfort of ease, ever of themselves made people either good or happy? On the contrary, the harsh conditions of Scandinavia produced a hardy grizzly bear type of people who never gave up and never gave in.

At a Bear minimum Grizz, your goal in life should be to out live Joe Biden by 10 or 15 years.

Sure does make “GFY” shine in a different light, huh?

Well, on the bright side…. Men can no longer be wrongfully excluded from the debate on killing the unborn by the MSM simply because they are men as men can also become pregnant. smh… I would like to see a well polished Pro-Life SPOX claim the same victim status in a debate on the national stage.

Erasing women is a side effect. The actual goal is to dismantle the nuclear family by removing women from their central role in it.

So when are the televisgelists going to start speaking out?

There would be no need for abortions if these slags, aberrant freaks, and ditzy dames would hold themselves to a strict moral code and attend the Latin Mass.

The worse the better

The Harry Potter story is very poignant here as an example of lefty weakness.

They left has tried to cancel Rowling while clinging to their HP books because they just wuv them soo much. It’s quite hilarious to see.