“Language evolves. So do we,” Dictionary.com tweeted in response to complaints it added an additional meaning to the term “court-packing” that fell in line with how Democrats redefined it two months before the election. 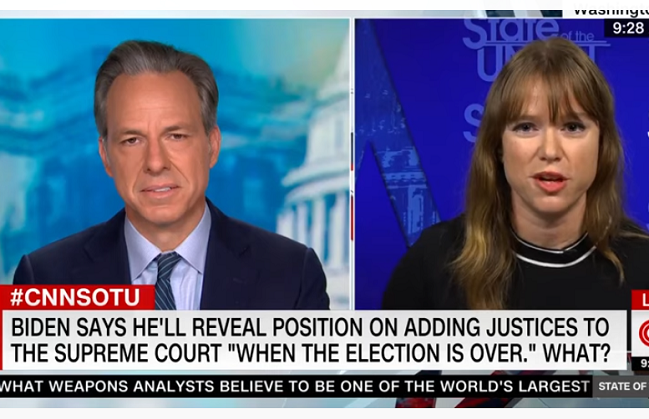 After the September 18th passing of longtime Supreme Court Justice Ruth Bader Ginsburg, President Trump and Sen. Majority Leader Mitch McConnell both made it crystal clear that a nomination to replace her would be made and that confirmation hearings would be held before Election Day.

This enraged the left. And somewhere along the way, calls started for Democrats to pack the Supreme Court if they got the opportunity. House Speaker Nancy Pelosi and Sen. Minority Leader Chuck Schumer were among those who said nothing should be left off the table if Judge Amy Coney Barrett was confirmed before the election. Some were even more explicit, calling for “expanding” the Supreme Court.

Such calls presented a big problem for the Biden-Harris campaign and other Democrats, all of whom began to get peppered with questions from the media as to their thoughts on packing the Supreme Court.

At first, many Democrats dodged and weaved on the issue when it came up during interviews. But after reporters grew uncharacteristically relentless in questioning them on the matter – refusing to buy Biden’s ridiculous position on how people would have to wait until after the election to find out his stance, an updated definition of court-packing was created by the left in hopes that the issue could be turned around to make Republicans look bad.

Here’s Biden telling a reporter that it was Republicans who were doing the court-packing by merely filling existing judicial vacancies:

“We should be focused on what’s happening right now. And the fact is that the only packing going on is this court is being packed now by the Republicans after the vote is already begun,” @JoeBiden says when I asked why voters have to wait until after the election for his stance. pic.twitter.com/dgGZIVeN1a

Biden campaign co-chair Rep. Cedric Richmond (D-LA) claimed on CNN’s “OutFront” show in mid-October that it was Republicans doing the court-packing, not Democrats:

On Thursday’s broadcast of CNN’s “OutFront,” Biden Campaign National Co-Chair Rep. Cedric Richmond (D-LA) stated that 2020 Democratic presidential nominee former Vice President Joe Biden “has not dodged the question” on court-packing, “What he has said is he’s not going to answer the question,” and there is a difference between the two. Richmond also stated that “court-packing is when you rush through unqualified judges, 50 judges on the circuit court, and you put not one African-American on the circuit court.”

“I’m going to be laying out the ways in which Judge Barrett’s views … are not just extreme, they’re disqualifying,” Coons said of Democrats’ strategy for Barrett’s hearings. “It constitutes court-packing.”

Sen Hirono, asked about Biden packing court, echoes Durbin: “I'm really concerned about the court packing with the ideologically driven nominees now sitting on the court, some 200 of them, that Trump has been putting on the court, aided and abetted, of course, by Mitch McConnell" pic.twitter.com/KnNJdCdKwO

a 6-3 conservative court IS packing the court @VP https://t.co/Bpl78NxIiN

Some in the media got in on the gameplaying as to what court-packing actually means, too:

Can we at least recognize that “Court Packing” at all levels of the judiciary has been the Republican playbook for decades? Asking for Merrick Garland.

With lightning speed, the Associated Press adopts Democrats' language on SCOTUS: adding members is now "depoliticizing" the court, only "critics" refer to it as "packing." pic.twitter.com/IBujBwmWE2

Dictionary Listens to the Left

With all of that in mind, and with also knowing how often dictionary entities like Merriam-Webster have rushed to alter the definitions of words to suit Democratic narratives, it should be a surprise to very few people that sometime within the last month or so, Dictionary.com decided to update their definition of “court-packing” to fall right in line with how the Democrats redefined it in the month before Election Day:

@Dictionarycom redefined the word sometime between Nov. 1 and Dec. 1, according to @waybackmachine.

And not only did they update it, but they also made it their primary definition, with the FDR definition on how court-packing has long been regarded as an attempt to add seats to a court being bumped to the second slot.

Because they took a significant amount of heat on the change, Dictionary.com’s Twitter account responded by laughably proclaiming that “Language evolves. So do we”:

Language evolves. So do we.

This isn’t about language “evolving,” and it’s an insult to the intelligence of anyone reading that to suggest so. This was an obviously partisan move by Dictionary.com to give an assist to Democrats, plain and simple:

George Orwell is very impressed with your diligence. https://t.co/S8AmvkgLK4

Unfortunately, it’s not the first time this has happened, nor will it be the last:

This month the left has changed the dictionary definiton of:

They are literally changing the meaning of words to win arguments pic.twitter.com/XDDv9fnSCp

The Orwellian stench is certainly strong these days with these people.

Orwellian. Big Brother has spoken. Is this really the USA? And how do the people, regardless of party, not see this as degrading to our society. Next, Love redefined as Hate.

notamemberofanyorganizedpolicital in reply to Union-of-Taxpayers. | December 10, 2020 at 6:09 pm

Concise in reply to notamemberofanyorganizedpolicital. | December 11, 2020 at 9:08 am

Maybe, but the dem slugs may also be trying to scare the Court just like FDR did. The Court folded then and they’ll likely do the same now. Not an institution full of those with integrity or courage.

How prescient Concise! Of course there is precedent for your observation.

DEMS and Commies sure love packing….

Wish they would pack their carpet bags and leave for Uranus…..

Only the beginning of the elimination of the 1st Amendment.
First change the words then make the old illegal and under penalty if used.
Welcome to the brave new world

notamemberofanyorganizedpolicital in reply to Skip. | December 10, 2020 at 5:56 pm

Or so DEM think.

They have a final think coming…..

Hey, how long has this been going on?

Look again. The “new” definition is the correct one, what it has always meant. Court packing, according to dictionary.com, means changing a court’s number or composition, typically by adding judges. That’s what FDR tried, and that’s what it has meant ever since.

The only change I see is that their old definition treated it merely as historical reference to one incident long ago, not as something that can happen at any time; in light of the Dem threats to pack the court next year, they changed the definition to include it as an active practice that can be done here and now.

They did not adopt the Dems’ definition of convenience, i.e. filling vacancies in the normal fashion with judges whom they don’t like. Good for them.

Everyone here knows that semantics is the hill you often choose to die on with lots of vinegar but c’mon.

If they can call Trump filling a normally vacant seat of the SCOTUS as “packing” then they can justify the abnormal adding of extra seats as “packing” and normalize it. It’s not hard to see what they are trying to do here.

The other thing is that they want to do exactly what FDR did…use “packing” as a threat. Trump did not threaten SCOTUS to rule his way, he just filled seats that were vacant. Democrats have REPEATEDLY from multiple mouthpieces, threatened the court to stay in line with them or they will pack the court and drown the court.

What has any of that got to do with the topic, which is not the Dems but dictionary.com? The Dems falsely accused Trump of packing the courts, while planning to actually pack the Supreme Court by adding justices. Amid all that, dictionary.com did the right thing by adding the correct definition, and not the false one the Dems tried to put over on us. So we should be applauding and thanking dictionary.com, not condemning it!

Nonsense. The new definition includes “changing the composition of judges on the court”, e.g., refilling existing vacancies. Packing has NEVER meant this. It has ALWAYS meant adding seats.

You are the one spouting nonsense.

It says “changing the composition of the court“, not of the judges! That means exactly what it says, and it is a common method of packing a court. It certainly does not mean filling vacancies in the normal fashion. Where did you get such an idea?

You are really reaching on this one.

THAT has been the long-accepted definition of “packing the court”, which Dictionary.com has decided to change.

I wonder when the Left will redefine murder to be a ‘post-partum abortion’ and demand the ritght to kill as a civil right?

They’ll redefine it so when they believe they have secured for themselves the only means of killing other people, by disarming the general populace.

Out-processing Ruth was a blessing. I thank Mitch for his diligent and efficient work in respect of judicial confirmations.

The year is getting shorter and shorter but hope springs eternal. May Jimmy Carter soon share a circle with Ruth and so many other enthusiastic servants of Satan.

Calling all wanna be tech billionaires:

Now that dictionary.com has announced it is bullshit, we need an alternative without bias.

Any takers, who want to join the Parler creator at the marina for yachts?

Words now mean whatever the DNC (AKA, The Party) say they mean.

If the money put into ineffective political super pacs or just some of the think tank funds got put into buying places like Dictionary.com we would do a lot better.

There needs to be a note after that definition. “This definition is disputed.”

Only by Democrats. And apparently people who can’t read. Which one are you?

Anyone who goofs as badly you did above ought not to be throwing stones at “people who can’t read.”

Shouldn’t the people pushing this have to refer to it as ‘the definition previously known as ….’ like we did with Prince?

I have several hard copy printed dictionaries. Mostly so that a few years/decades from now I won’t forget what words used to mean.

I recommend getting a physical, hold it in your hand, dictionary and then using it. Fuck these on-line assholes.