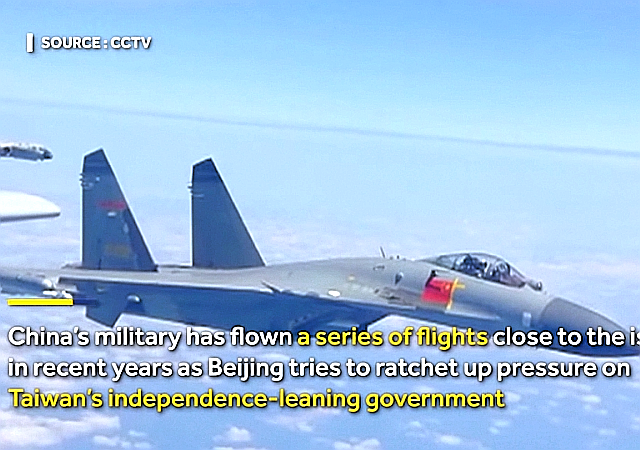 As the Russian military offensive reaches the outskirts of Ukraine’s capital Kyiv, Communist China is watching the U.S. and Western response as a test case for its ambitions to annex Taiwan.

Emboldened by Russia’s invasion of Ukraine, the leading Chinese Communist Party propagandist, Hu Xijin, told Taiwan to “get used to” such acts of aggression.

Get used to it. There may be more PLA aircraft fly there tomorrow. https://t.co/viU4vlEye5

The Taiwanese defense ministry fears that China could launch a “full-scale invasion” of Taiwan as early as 2025.

The number of aircraft involved was well off the last large-scale incursion, 39 Chinese aircraft on Jan. 23, and since then, such fly-bys have been sporadic with far fewer aircraft.

The ministry said the latest mission involved eight Chinese J-16 fighters and one Y-8 reconnaissance aircraft, which flew over an area to the northeast of the Taiwan-controlled Pratas Islands at the top end of the South China Sea.

Taiwanese fighters were sent up to warn the Chinese aircraft and air defence missiles were deployed to “monitor the activities”, the ministry said, using standard wording for how Taiwan describes its response.

A day after the Biden administration, European Union, and several Western countries announced a series of economic sanctions on Russia, China stepped up to cushion Putin’s regime against these measures.

“China is ready to throw Russia an economic lifeline as Vladimir Putin’s ties with the west deteriorate and Moscow is hit by snowballing sanctions over the crisis in Ukraine,” Britain’s Financial Times noted on Thursday.

In response to the latest sanctions on Russia, Beijing reaffirmed its opposition to “all illegal unilateral sanctions”.

“Since 2011, the US has imposed more than 100 sanctions on Russia,” Hua Chunying, a foreign ministry spokesperson, told reporters in Beijing. (…)

Russia is by far Beijing’s biggest recipient of loans from official sector institutions, totalling as much as $151bn between 2000 and 2017, according to AidData, an international research lab at the College of William & Mary in Virginia.

Beijing instructed the state-run media to support Moscow’s planned military aggression against Ukraine ahead of the Russian invasion. China will need Kremlin’s backing in “wrestling with America” on its ambitions to annex Taiwan, accidentally leaked orders to the Chinese news outlets show.

A leading “Chinese state-run media outlet accidentally published editorial “instructions” on how to cover the escalating crisis and a senior editor had urged China to “back up” Russia so that it could get support on the Taiwan issue,” UK newspaper The Independent reported on Friday.

The Independent revealed a Chinese directive to state-run media.

Chinese state-run news outlet Horizon News had appeared to accidentally publish editorial “instructions” on its Weibo page for pro-Russia reporting and how to cover the invasion to show Russia in a positive light. (…)

Ming Jinwei, who is a senior editor at Xinhua News Agency, wrote on his WeChat blog, just days before the Russian invasion of Ukraine began, that it would be in Chinese interest to support Russia because the former would need Moscow’s support on the Taiwan issue.

“China has to back Russia up with emotional and moral support while refraining from treading on the toes of the US and EU,” Mr Ming said (…).

“In the future, China will also need Russia’s understanding and support when wrestling with America to solve the Taiwan issue once and for all.”

With President Biden in the White House, China and Russia are openly forging a military axis to counter the U.S. and Western allies. “China and Russia are edging closer to a de facto military alliance,” the South China Morning Post reported on November 24, 2021. The cement this alliance, both countries “signed a road map for closer military cooperation over the next five years,” the newspaper added.

The emerging China-Russia axis poses a serious threat to the U.S. and global security. The combined China-Russia military budget surpasses U.S. defense spending. According to recent estimates, the Chinese and Russian defense budgets are roughly $604 and $200 billion respectively. The U.S. defense expenditure is currently pegged at $740 billion.

Having a literal mental retard as POTUS creates a massive power vacuum. And we all know what happens to power vacuums.

Good job progs! At least there are no mean tweets! Amirite?

They’re looking for Edith Wilson to get some advice. So far they have not been successful.

They’ll be lucky if Edith Bunker returns their calls.

She’d be better than who’s in charge now, I could assure you that.

Having a literal mental retard as POTUS when we are on the verge of WWIII is more than a power vacuum. It is total insanity.

Well, I’m told not to worry. Kamala Harris has been whisked away to safety in a bunker in Wyoming.

Where she’ll be promptly left outside to look for open windows to the bunker.

People in Wyoming would not take kindly to that!

From power vacuums comes war. And, here we are.

As Americans, we need to be ready to make a stand. Will our stand be in Taiwan? Or will we have to wait till China invades the Phillipines?

Come on man. Someone once said China is no threat they are not going to eat our lunch.

If anything happened to us, who would buy their worthless overpriced made in China products?

Nothing will happen to us, but Taiwan will cease to exist as an independent state and Biden will roll over and let it happen. When you have a feckless, drooling moron in charge, who has never been right about anything concerning foreign policy for close to 50 years now, this is what we get.

I’ve never seen a public figure who is as much bark but no bite.
Then there’s Hillary Clinton, who is all bark, all bite, but bites the wrong parts.

Our country is being led by morons, the mentally ill, the corrupt and the treasonous.

There are about 10 exceptions, but that’s it.

While Putin is a gangster leading a giant mafia, so is the American swamp.

For Biden to be “fiddling” on Ukraine, he would have to be able to remember that there is a place called Ukraine for more than 2 minutes at a time.

This is a direct result of a political party so corrupt, that an enormous percentage of its membership would rather have a pretend leader of their own party – allowing them to pursue their own agendas and line their own pockets – than someone of the other party who actually cares what happens to the country.

Hu Xijin…okay, send over one of those junk chinese fighters. I’ll take it out the sky with balsa, cardboard and black powder…your own invention.

Russia, China et al are following the American-backed Kosovo precedent. Ukraine was a Libyan/Syrian/Egyptian/South African/Afghan-style regime change of a UN-affirmed democratic process. Demos-… democracy is aborted at the Twilight fringe.

That said, 32 trimesters to make amends and offer remediation to the people for one of the most audacious acts… most recent acts to undermine security and stability of a nation and People. Diversity (e.g. racism) breeds adversity. Progress was inevitable.

In related news. the Merriam-Webster online dictionary has just redefined the word “malarkey” as “a state of peace and stability.”

And “full scale invasion” is a minor incursion.

Under “stupid f++king a-hole who could not beat Obama or Candy Crowley in a debate”, it says: See Mittens Romney.

I looked up Romney’s dog and it said he blew off the roof of the f++king car.

China has been eyeing it for awhile now. And Xi has been licking his chops. They’re waiting for the weather gauge.

And if you think they’ll stop at Taiwan, I have a Phillipines I’ll raise you.

Taiwan is critical to the USA, Japan, South Korea, Philippines, Vietnam, Indonesia, Australia, and India. Taiwan is a democracy, critical to high technology, and needs to remain free from the communists. The United States must respond to China’s belligerence with greater strength, unyielding determination, and more vigorous diplomatic and military measures. President Trump has indicated, and Biden should endorse that he would understand if South Korea and Japan acquired nuclear weapons and the US needs to accommodate their needs by providing a strong nuclear deterrence to China’s illegal and threatening actions. Perhaps Taiwan should be included. If communist China understands that any offensive force will be met with equal destructive force, perhaps their aggressive actions will be controlled short of a surprised attack. Any surprise attack should automatically assure the carpet bombing of nuclear bombing of the Communist Chinese party and leadership along with their military targets.

Been saying since day 1 of the Sundowner the Puppet era Taiwan is done, China bought it through the Bidens, I guess as soon as Putin seals a chunk of Ukraine they will move.

ROC Armed Forces are incredibly well trained, well equipped and tough as nails. With 150K regular army and well more than a million in reserve plus 300 4Gen multi-role fighters and an enormous stockpile of anti-ship missiles, they’ll put up a helluva fight. It will be a meat-grinder for China, that is certain.

Unfortunately, even if they manage to repel a Chicom invasion, their critical industries aren’t likely to survive, which would be catastrophic for global economy.

taiwan is first and foremost an island–why the intent focus on some sort of littoral invasion/landing?–china has the resources (it’s what, 180km to the mainland?) and the ability to implement and maintain a blockade while controlling the airspace over the country–no need to engage the roc forces directly(regardless of the rocs legendary toughness)–this would, however, put the chinese in direct confrontation with japanese/australian/us naval forces in the theatre–to preempt a chinese blockade would be necessary for us to attack THEM–consider that prospect for a moment

Though smaller, Taiwan can perform some asymmetrical pushback. Please don’t rock the boat Uncle Xi. Three Gorges is an amazing dam, be a shame if something happened to it….

Remember: China has nukes, and 1.6 billion people. They’ll take a Three Gorges disaster for Tawian, any day. It’ll be like it never happened.

You don’t have to attack China’s infrastructure. It’s designed to fall apart after two years.

No. Not only would the collapse of the dam kill millions, the resulting flood would tear through the heart of some of China’s primary farmland and industrial areas. It would cripple the Chinese economy and result in nationwide starvation. They would absolutely notice that.

I remember Kissinger talking about with Mao how many millions China would lose in a war. Whatever number the Chinese nominated, Kissinger didn’t believe we would let them get away with that few.

Taiwan has studied the problem.

Taiwan a has been practicing for years. Not like I would know. Officially, the Pacific fleet.

They’ve just been waiting for s*** to happen for the last century.

Obama owes all of an apology.

Biden skimmed his “10% for the big guy ” off the U.s. Taxpayers forighen aid package to them.
Then, he did everything but beg Putin to invade.
No more Ukraine, nobody left alive to testify against him.
He sacrificed an entire nation.
For money. Our money.