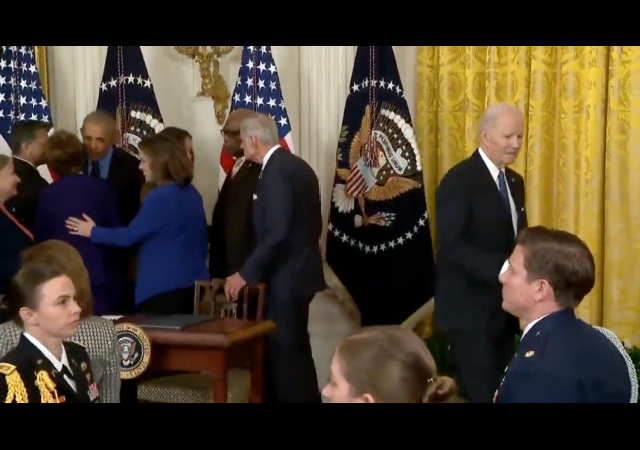 President Barack Obama visited the White House to celebrate the socialized medicine they pushed on us during his administration by announcing an expansion of it:

The White House will be pushing forward an amendment to the program that will allow families with health insurance through an employer to receive financial assistance paying for the coverage. Under the proposed change, households that spend 10% or more on health care insurance will now qualify for financial assistance.

Biden “will take additional action to further strengthen the ACA and save families hundreds of dollars a month on their health care,” the White House said. But Biden officials provided few details on how much the expansion would cost, or how it would be paid for.

It was a disaster for Biden. It only proved to us that Biden is not all there and no one respects him.

Obama called Biden, “Vice President Biden.” He laughed it off as a joke and that it was planned.

But was it a joke? pic.twitter.com/Zx9ecZRZPf

Was it a joke? Biden brought in pretty much everyone from Obama’s administration! It’s disturbing.

But the most cringe part was at the end. No one wanted to talk to Biden. I almost feel sorry for him.

When you bring your cooler brother to the office and all your co-workers like him more than you pic.twitter.com/iTKmHcregB

Nobody particularly liked Biden even BEFORE his brain turned to mush.

He’s a figurehead that barely anybody even PRETENDS to respect when the cameras are rolling.

When they think the cameras are off they openly laugh at how pathetic he is.

They laugh because they know who is in charge. And it isn’t Biden.

“But the most cringe part was at the end.”

The whole thing was Cringe with a capital C.

By now the entire country realizes we have stepped in fresh dog shit.

Third Term? Obummer has been the puppet master of POS Biden from day one. That is why everything has been a total cluster!

Obama was as much a figurehead as Biden. He was chosen for his skin tone and easy to obscure past.

His past was really obscured. It was wiped clean. There’s not much that we know about him for sure.

In evidence law, omission (admission by silence, when not under arrest) is evidence of admission or commission.

Obama’s ‘obscured’ past is all we need to know the worst is true.

It was not a joke, but a senile fool saying the quiet part out loud.

Another reason to impeach, if we had a Congress with some love for America and a backbone.

Too bad for old Joe but this is what they voted for and I hope the Democrats regret it by 2024.

BO did not want Bidless to be president.

Then why abandon Bernie? Why pull Kamala out of the primaries? I can’t see Obama as a super sock puppet.

Bernie had an agenda of his own and wouldn’t agree to do what he was told. Harris was controlable.

I don’t belt that.

I can’t see him as anything but.
Came out of nowhere, gave the Clinton nomination speech at the DNC (clearly a grooming exercise) when everybody in the country was saying, “who the hell is this guy?”
Just like Epstein didn’t kill himself, Obama didn’t obscure his own birth certificate, Social Security history, or educational record. A lot of somebodies did all those things for him.

that really was sad at the end there. Biden is an incompetent fool and has been an ally of evil for years, but at this point, the more evil are the people who are abusing him for their own gain.

It was sad but scary. I get that everyone was stoked to see and interact with Obama and for a moment relive the good old days. The sight of POTUS being actively ignored, excluded from conversation and ignored was frightening to me.

It indicates that everyone in the room felt comfortable in doing so. It was as if it wasn’t a big deal that the ‘leader of the free world’ was being treated as ..expendable? Maybe a better word is supernumerary?

They all know he’s not in charge. What more evidence do we need?

My concern goes beyond that. How could the Chief of Staff not have foreseen this possibility and worked to minimize the danger of such bad optics? It would be simple to pull a few attendees aside beforehand and ask/direct them to hang out with Biden in a rotation if they saw this happening.

That no one thought of this and worked out a way to mitigate it tells us more than Biden might be effectively irrelevant. It indicates that the powers behind the throne are either:
1. Not smart enough to plan ahead to fix it
OR
2. They don’t care enough to fix it

There might be a third choice, somewhat consistent with the Hunter Biden laptop now getting some press. What if the powers that be in the party plan to let Biden and Kamala take the fall for all the bad things going on and in 2024 there will be the “younger, good Dems who love you to rescue the country from the evil Republicans that took control of Congress in 2022”?

There’s more than one person working behind the scenes and they are working ar cross purposes.

I don’t disagree that neither Biden or Harris are likely to be the d/prog standard bearer in 2024. Nor about the likelihood of of d/prog repudiation in 2022.

The problem is we are 33 months and change from the next Presidential inaugural and must bear the consequences of Biden and the powers behind him until then.

A perverted, corrupt old man who hasn’t done an honest day’s work in his life, who’s used his position and influence to enrich himself and his family at taxpayer expense, who doesn’t give a damn about selling out this country to the highest bidder…nope, don’t feel sorry for him AT ALL.

It would be considered elder abuse if it were anyone else, but Joe deserves whatever he gets.

Every single one in my lifetime could qualify.

Ace put up the clip of no one speaking or looking at Sundowner, like to see the full length video.

In case that was a sincere question, Big Man On Campus.

Thank you – I didn’t know either.

“there will be the younger, good Dems”.
Sorry, no such thing as good Dems. Dream on. Even Manchin is caving.