The Times of Israel: “Overnight Sunday, around 100 Palestinians broke into the site, rioted and smashed objects inside, and set it ablaze.” 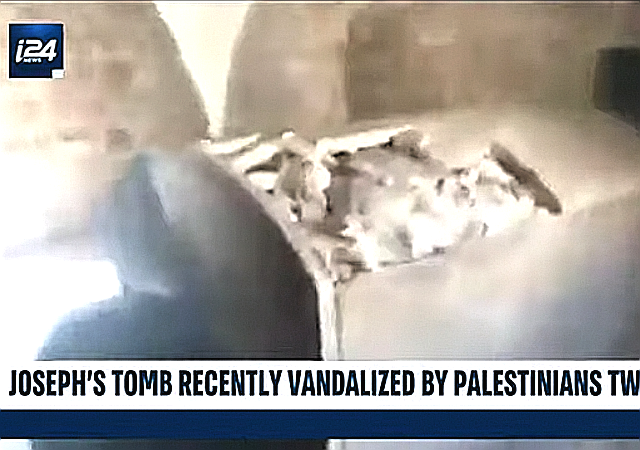 Amid a wave of deadly terrorist attacks and rioting triggered by the Muslim month of Ramadan, Palestinians in the city of Nablus vandalized and set fire to the tomb of the biblical prophet Joseph.

A Palestinian mob shattered the gravestone and destroyed sacred objects inside the tomb, the Israeli news reports over the weekend said. “Overnight Sunday, around 100 Palestinians broke into the site, rioted and smashed objects inside, and set it ablaze,” The Times of Israel reported.

On Monday, Palestinians continued their attack on the tomb of Joseph, a figure revered by Jews, Christians, and followers of other Abrahamic religions. “Videos shared on social media show a number of young men throwing stones inside the site,” The Jerusalem Post reported Monday.

Whenever there is tension, #Palestinian thugs in #Nablus take to the streets and burn the sacred site of #JosephsTomb. They did this last night once more. How sick can people be to burn a holy place? This area is under the control and protection of the Palestinian Authority. pic.twitter.com/7owcOnpJs7

The Israeli government vowed to bring the miscreants to justice. “We will not come to terms with such an attack, in a place that is sacred to us, and on the eve of Passover,” Prime Minister Naftali Bennett said. He promised to “find the perpetrators,” the newspaper Israel Hayom reported Monday.

The Israeli news website YnetNews reported the desecration of the biblical site by Palestinians:

Palestinians vandalized Joseph’s Tomb in Nablus, one of the holiest sites in the Jewish religion, in an attack pre-dawn Sunday amid heightened security tensions in the area.

About 100 Palestinians rioters stormed the site, shattering the tombstone and lit fire to rooms in the monument.

“This is an assault on freedom of worship in one of the holiest places for every Jew, and to the Israeli people in general, especially during the holy Muslim holiday [Ramadan].

“Israel will make sure to fix the monument, return it to its previous condition as soon as possible, and act with all means necessary, so that an event like this doesn’t happen again.”

Gantz added that he “passed along a stern message to the Palestinian Authority that it must boost its forces at the site immediately, and act against the rioters and terrorists that harm the stability, safety, and the holy sites”.

Head of the Shomron Regional Council Yossi Dagan was in close contact with security officials and criticized Israel for neglecting to properly protect the Jewish holy site.

“This is an act that no Jew will not be appalled by. They ruined one of the holiest places for the Jewish people, only because the Israeli state left the place to ‘guardianship’ of the PA.”

Dagan, in delineating the event, compared the Palestinians to Islamic State, and called on the IDF to take on the guardianship of the holy monument.

“We’re horrified by the event and demand condemnation from all state officials. The IDF must return to the Joseph’s Tomb and guard the holy site.”

Palestinians broke into Joseph's tomb in Nablus for the second day in a row and vandalized it. pic.twitter.com/KKvghre1ik

This is not the first time Joseph’s Tomb in Nablus, a city administered by the Palestinian Authority in accordance with the 1993 Oslo Accord, has been targeted by the Palestinians. In recent years, Palestinian mobs have repeatedly attacked the sacred tomb and Jewish worshipers, who are allowed restricted access to one of their holiest sites.

The latest act of vandalism comes as Israeli security forces conduct counter-terrorism operations in Palestinian Authority-controlled areas. At least 14 people have been killed in a wave of terrorist attacks that began with the advent of Ramadan.

Several of the terrorists who carried out those attacks came from cities and towns under the control of the Palestinian Authority, particularly from Jenin and nearby areas. “Since March 22, the Jewish state has been hit by four major attacks, the first two perpetrated by Israeli Arabs linked to the jihadist organization Islamic State (IS) and the last two by Palestinians from the Jenin sector,” the Israeli news channel i24News noted Tuesday.

I’m so tired of this stuff. The infantile, goose-stepping, brownshirted bullies of the intrinsically supremacist, totalitarian and hate-filled ideology of “Submission” — enabled by European, Leftist dhimmis and American Dhimmi-crats, naturally — constantly lashing out against people who don’t share their beliefs, believing that their self-perceived, contrived and fallacious victimhood status entitles them to behave in this manner. There isn’t any other religious ideology on Earth boasting a substantial number of adherents who persistently behave in such a perpetually violent, belligerent and destructive manner. It’s nauseating.

And, the Dhimmi-crats constantly whitewash/ignore/rationalize the obvious pathologies of “Submission,” while absolving its adherents of any responsibility for their behavior.

Time to start bombing Mosques, one every artifact damaged or destroyed, preferably 5 times a day. Everyone needs to stop pussyfooting with these ingrates.

—
I’m so tired of this stuff. The infantile, goose-stepping, brownshirted bullies of the intrinsically supremacist, totalitarian and hate-filled ideology of “Submission”
—

Still couldn’t work out which religion you were on about. They’re all hate filled population control mechanisms perpetuating archaic superstitions.

Hebrew retribution will soon come down upon them in the Old Testament style plague of locusts that will devour the crops. My heart bleeds for them.

When will it come down in reality?

The minute I get out the carwash buckets.

Won’t protect something you don’t believe in…you lose your access. Israel could take the site in a day and no one should stop them, not even the UN bitches.

Time to start bombing Mosques, one every artifact damaged or destroyed, preferably 5 times a day. Everyone needs to stop pussyfooting with these ingrates.

Apparently, I somehow did say it again, I don’t know how that happened, usually the software rejects a duplicate.

are you sure you’re talking about the PA or the current administration in the USA?

The PA’s Achilles heel is international funding as they produce nothing but terrorists and the world market is already flooded with those.

Stop the free lunch. Tie funding directly to good behavior on the part of the Palestinians. Trash a holy site – lose 100 million bucks. Fire rockets into Israel – lose all funding for a year.

We have had lots of experience with these people, they have no hope, no future, stop feeding them.

When Israel stops pandering to the Palestinian Authority only then will acts like the destruction of Joseph’s tomb end.

Not with that mamzer in the White House.

They want a lasting peace, lets accommodate them in large enough numbers that they actually crave peace.

They do not want Peace, they want universal world control.

Who knew savages had a Holy month?

They get up early and eat breakfast.
Then skip lunch.
And pig out when the sun goes down.
And they call it fasting.

This is what the place looked like 100 years ago. The entire city around it is new.

This is the third time the Arabs did this. In 2000 they destroyed it, and the IDF guards there were so outnumbered they had to retreat and leave a wounded soldier behind to bleed to death. Then they destroyed it again in 2015.

Enough. Israel needs to take over the sight and send the South Syrian goat herders packing. If they storm the sight again, gunfire until they stop. It’s no wonder those terrorists have been thrown out of every country they parked their misbegotten keisters in.

And then, “Let’s desecrate some tombs.”

“The story of Joseph in the Qurʾān is a continuous narrative. There are more than one hundred verses, and in totality they encompass many years and “present an amazing variety of sciences and characters in a tightly-knit plot, and offer a dramatic illustration of some of the fundamental themes of the Qurʾān.””

“Scholars and believers reveal Joseph is one of the most revered men in Islamic history.”