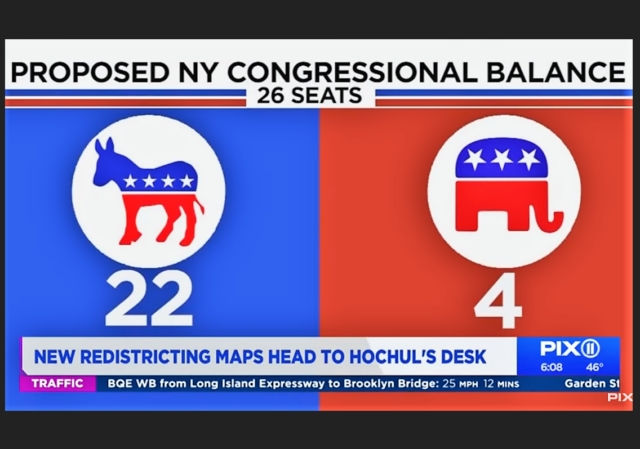 New York State Democrats designed a congressional redistricting map that was so egregious that a judge threw it out, Judge Throws Out NY State’s Democrat Gerrymandered Congressional Map “Unconstitutionally Drawn With Political Bias”.

The Appellate Division, the intermediary appeal court, upheld the trial judge’s decision as to congressional redistricting.

The Court of Appeals, the highest court in the state, heard argument on April 26:

The Court of Appeals just ruled, throwing out the Democrat map and appointing a special master to redraw the districts.

In 2014, the People of the State of New York amended the State Constitution to adopt historic reforms of the redistricting process by requiring, in a carefully structured process, the creation of electoral maps by an Independent Redistricting Commission (IRC) and by declaring unconstitutional certain undemocratic practices such as partisan and racial gerrymandering. No one disputes that this year, during the first redistricting cycle to follow adoption of the 2014 amendments, the IRC and the legislature failed to follow the procedure commanded by the State Constitution. A stalemate within the IRC resulted in a breakdown in the mandatory process for submission of electoral maps to the legislature. The legislature responded by creating and enacting maps in a nontransparent manner controlled exclusively by the dominant political party — doing exactly what they would have done had the 2014 constitutional reforms never been passed. On these appeals, the primary questions before us are whether this failure to follow the prescribed constitutional procedure warrants invalidation of the legislature’s congressional and state senate maps and whether there is record support for the determination of both courts below that the district lines for congressional races were drawn with an unconstitutional partisan intent. We answer both questions in the affirmative and therefore declare the congressional and senate maps void. As a result, judicial oversight is required to facilitate the expeditious creation of constitutionally conforming maps for use in the 2022 election and to safeguard the constitutionally protected right of New Yorkers to a fair election.

As pointed out before, this has national implications. Democrats were set to pick up 3-4 seats in NY based solely on redistricting. If the 2022 midterms were closer than is being predicted, that could be the difference in control of the House. The NY Times assesses the hurt to Democrats:

National Democrats had been counting on the maps that the State Legislature approved in February to pick up as many as three new seats this fall and offset redistricting gains by Republicans in states they control. With Democratic gains likely to be erased in New York, Republicans are on track to make modest gains nationally, easing their path to retaking control of the House of Representatives this fall.

The ruling makes New York the most prominent state so far this cycle to have a map stricken over partisan gerrymandering. Courts in Ohio, North Carolina and Alabama have all found instances of partisan or racial gerrymandering by Republicans so far, and the courts are widely expected to scrutinize new lines in Florida that overwhelmingly favor Republicans. And in Maryland, lawmakers were ordered to redraw an “extreme gerrymander” that favored Democrats.

The court’s findings could also undermine Democrats’ attempts to position themselves as the party of voting rights and could cast their attacks on Republican gerrymandering efforts as hypocritical.

Breaking: NY's top court throws out Dems' congressional map and delays June 28 primary, depriving them of their most critical gerrymander of the 2022 cycle. https://t.co/yNlPes1FVN pic.twitter.com/9nRJjGRHyy

If someone would just make the Democratic party illegal that would be a fantastic result for America.

It would take 50 years to undo just what Biden has done in the past year.

Don’t forget the destruction wrought by dotard Biden’s more glib, cognitively healthy and media-savvy, but, equally-destructive predecessor — narcissist-incompetent, Obama. His eight-year tenure was utterly cancerous and corrosive, in terms of the fiscal, moral, cultural and policy rot that was foisted at home and abroad.

We can do that, but the GOPe will enable them right back.

The biggest gift we could give to the left is to allow McCarthy to become the next Boehner.

The plan is already in the works:

If one wanted to be just a tad cynical, one would envision that the ‘special master’ would draw lines that would give the Pubs six districts instead of four. There, see how much fairer that is? The courts would endorse and the Dems would have most of what they wanted.

I said this a while ago. It’s the ‘compromise’ strategy of demanding EVERYTHING that you have, then ‘compromising’ and only taking 80% and acting like they made some big concession.

IF a 60%-40% state-wide party registration split is realistic, that MIGHT imply Republican-leaning Congressional districts could/should be 10 of the (reduced) 26.

I certainly prefer a rational and ~scientific roughly-equal population map modified by geographic and local government boundaries – and ignore the party-affiliation and racial factors. (Yeah, I know, good luck with that.)

(Haven’t looked up the reality of the present registration split, but the reasonably-fair calculation process would be the same. Your mileage may vary.)

Kinda hard to disprove when you publicly brag about your gerrymandering.

Think of the DNC’s desperation to have to rig New Dork.

What are the courts thinking, ruling that Democrats have to follow their own laws? Next thing you know, they’ll be demanding that only count legal votes be counted.

The current courts would never do that.

Excellent. That means that Marc Molinaro, the Dutchess County Executive has an excellent chance of beating Dem. Antonio Delgado in NY-19! Moved of NY state to a red state, but I will go back to knock on doors for Molinaro.

Democrats are like little kids. They just keep pushing, and pushing, until somebody gives them pushback. But their timing sucks. They’re getting six years of stored pushback right now, just in time for a critical election.

You are right of course, but I think you can drop the little from that. The “big” children still do this, too hence failure to launch.

Behind those ‘little kids’ are monsters. Don’t kid yourself.

What I find funny about this is multiple Republican State Legislatures took their gloves off in retaliation for this map.

Really? Because all I’ve heard about was Florida, and they had their own map to fight about.

Maybe the difference is Florida, unlike NY, followed their laws in redrawing their electoral maps???

Well no, they didn’t. They gerrymandered the hell out of the map, and DeSantis threw it back in their faces. All I’m saying is that I doubt very much DeSantis was triggered by New York, and I haven’t heard of any other state inspired by them either.

Bama as well. Case to SCOTUS next fall and has a realistic chance of settling the catch 22 that States are in;
1. Redistricting based exclusively on race or when race is used as the primary factor with no other compelling State interest is wholly unconstitutional.
2. Redistricting that fails to use race as the defacto primary factor and then results in a diminished opportunity for racial and other minorities to ‘elect the candidates of their choosing’ is also verboten.

This could be a big deal in a likely very contentious 5/4 ruling with lots of bad faith accusations and claims of all sorts of ‘ists and isms’. Roberts may join the majority to make it 6/3 so he can write the opinion. We will see if he has drifted from his stance in Shelby County.

I’m surprised that there is a NY State Judge that will do anything other than rubber stamp a Dem deal. How in the world did THAT happen?

This is a very important decision by a court that tends to lean left in a very blue state. Let’s see what the Special Master draws up in terms of a reapportionment plan /