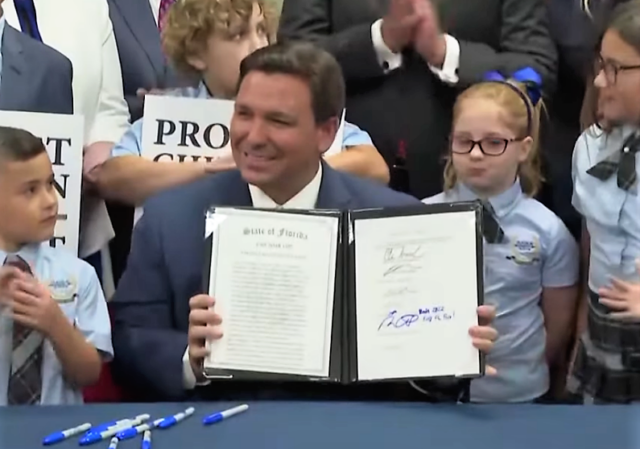 With the recent announcements from Republican Senators Mitt Romney, Susan Collins, and Lisa Murkowski that they would vote to confirm President Biden’s Supreme Court nominee Ketanji Brown Jackson, you’d think the mainstream media and Democrats would be content. They should be saying that efforts by other Republican Senators to stall her nomination failed and then move on.

But journalists and their allies on the left are never content with simply acknowledging they “won” their fight. Instead, they work at a frenzied pace to coordinate their message and talking points a la the old “JournoList” days because they want people to believe their political opposition on the right are just awful people who stooped to gutter lows during the battle.

This week, such has been the case with an emerging narrative from The Usual Suspects. They seek to paint Republicans concerned about Judge Jackson’s light sentencing track record with child sexual predators and also championed the new “Parental Rights in Education” law in Florida as propagandists in a modern-day version of the “red scare,” where there is a child predator/groomer around every corner and a Democrat willing to coddle them.

Here’s a screenshot from Memeorandum of some recent pieces which alleged QAnon coordination among other bat-crap crazy conspiracies:

Just fascinating how all these "reports" (and there are actually many more than this) magically were filed around the same time. I'm sure there's no coordination here. Nope. pic.twitter.com/lyhn5LOOuL

Gov. Ron DeSantis’ press secretary Christina Pushaw also pulled up several articles that have gone up in the last several days that had a similar theme:

CNN and MSNBC got the DNC talking points too. Again, this is all from the past 24 hours. pic.twitter.com/fewz8dznd9

NBC News editor Benjy Sarlin also alleged a “homophobia” component behind the support of Florida’s new law. It prohibits age-inappropriate instruction on sexual orientation and gender identity topics in grades K-3. It enshrines parental rights when it comes to discussions of such sensitive subject matters with children.

Naturally, that horrifies the liberal media and Democrats, who have been quite vocal over the past year about making sure people know they don’t believe parents should be telling schools what they should teach:

The "groomer" talk is just warmed-over 1970s homophobia returned, there's not much more to it. Nothing about it is particularly new. https://t.co/Fq8bDHFYVq

Most Republicans targeted in these pieces will likely do the smart thing and not dignify the accusations with a response. Sometimes, media smear campaigns speak for themselves without any more needing to be added by the targets of their ire.

But the ones who do need to point out that the last people on the face of this earth to lecture anyone about alleged gutter tactics are the same people who for decades have portrayed Republicans as racists, homophobes, misogynists, bigots, rapists, grandma killers, murderers, Nazis, etc.

One who (understandably) won’t keep quiet on it is Sen. Josh Hawley (R-Mo.), who took to the Twitter machine Tuesday to provide an update on his attempt to strengthen sentencing guidelines for child sex predators:

Child exploitation is a crisis. It’s exploding but Democrats refuse to act. They blocked my legislation on the floor today. They are the soft on crime party pic.twitter.com/5anL9Zntn5

Hey Democrats, don’t like the suggestion that you turn a blind eye to groomers and pedophiliacs in the interests of wokeness and not judging people? Then maybe you should, I don’t know, stop turning a blind eye to it. Just a thought.

The freak out by the left over this is something to behold. I’m not sure why throwing kids who are single-digits-old into sex talk gets them all excited. These people are sick and disgusting.

Agree. Colonel. They’re so firmly sealed in their bubble that they don’t see how this bill and their subsequent freak out is viewed by the sane majority of FL residents as well as non-FL residents. Most parents don’t want other adults talking to their small children about sex. You’d think that’d be a no-brainer. However, if the lefty, Rat party wants to press the issue and further expose themselves as the degenerates that we know them to be, then let them.

I believe the Triumvirate Left (media, politics, academia) is fighting out against the new Florida law and attention bought to pedophilia because their goal is to see pedophilia adopted as another sexual orientation.

Now I know plenty of everyday Leftists who are disgusted by the sexual exploitation and abuse of children and they do not support such efforts. However they get shouted down more often than not.

In order to give legitimacy to pedophilia being just another example of “born that way” it is 100% necessary to argue that children themselves are sexual beings with a right to consent to sexual behavior. Now that does not just mean physical sex. It means children choosing their “gender”. It means never challenging that their sexual orientation is fixed. It means early exposure to experiences that were once considered inappropriate by just about everyone. Think “Drag Queen Story Hour” and family friendly Pride Parades. A tamer version of this is challenging school dress codes for being a form of “slut shaming.”

They really can’t understand any concept of true innocence. Virtue is just another lie to keep us from our authentic selves.

One – There has not been a verified “Q” post since December 8, 2020. They’re bringing QAnon back up after almost a year and a half of silence?

Two – If they’re not trying to sexualize minor children, why are they losing their minds about it being brought up? And the “Red Scare” wasn’t it?

“They’re bringing QAnon back up after almost a year and a half of silence?”
They bring slavery and the KKK up after 150, and both of them were completely their fault to boot.

That last sentence should read: “And the “Red Scare” about socialist/communist infiltration turned out to be valid didn’t it?”

Because they are sick and disgusting, as all groomers are.

If these sorts of legislation are just rhetorical pandering to the conservative base and will not in fact prohibit any current activity in classrooms because d/prog insist that nothing like this is occurring; ‘we don’t use the principles of CRT/equity and we don’t want to talk to K-3rd grade about sex and gender’ then why the pushback? If there’s no activity to prohibit because the now prohibited activity wasn’t happening then why oppose the legislation? Why get on the side of ‘groomers’ and take the political risk of being linked as a shill for grooming?

The obvious answer from the many social media postings by members of the ed establishment and teacher unions is that they are doing the things the legislation prohibits. They are upset that the curtain has been pulled back; that parents and taxpayers know what they have been doing and are working to stop it. That’s why the ed establishment and their media shills and d/prog political allies are so opposed to enacting true school choice.

Not just d/prog politicians. Many r officeholders take contributions from ed establishment and teacher unions. These frauds in office claim to support but block the only true reform; funding the Student instead of the system.

Stop trying to be logical. They don’t care if their arguments make sense. They only care that they can manipulate people with anger.

There can be no other definition of the people opposed to the bill than “pedophiles”. The word “gay” is nowhere to be found in the bill, so it might as well be called the “Don’t Say Straight” bill. Unless you are their parent, DO NOT TALK TO YOUNG CHILDREN ABOUT SEX (any kind of sex). If you insist on doing so, you are a pedophile.

The LGBT community denies the existence of pedophilia in its community and continues to condone and justify it in academic papers and is a major component of the Democratic base. Anyone supporting the rights of parents can expect “red scares” and worse in the legacy media and Big Tech

Wait…wasn’t the Red Scare accurate? Haven’t our entertainment and education fields been intentionally infiltrated by people who promote communism? Didn’t that also happen to our government?

I wasn’t alive then, but it sure seems like the Red Scare was more like the Red Reality from where I sit using hindsight.

McCarthy was right, it’s just that few people are willing to admit it.

McCarthy was right, he was just an asshole about it. And that was his only failure.

His only failure was a massive underestimation of the scale of the problem.

Communism had a major influence on the left in the US-McCarthy went after Communism, which remains a powerful ideology on the left , in the wrong manner

Under the age of 15 there’s no reason to teach advanced psychiatry to children and to explain to them that childhood abuse fries a child’s wires and thus they act weirdly.

Not your fault. http://www.MaleSurvivor.org has resources to help. You can improve.

Throw a stone into a pack of dogs and you can tell which ones got hit by all the yelping.

Judging by their actions and reactions, there are an awful lot of Congresscritters who are yelping about Jackson’s enablement of pedos. Their refusal to see anything wrong with it speaks volumes as to what some of their extracurricular activities might include.

Or who their donors are.

Here are all the politicians Jeffrey Epstein, the money manager arrested on charges of sex trafficking, has donated to:

And the grandaddy of them all (besides Clinton and Epstein):

Accusing teachers who brag about their grooming on TikTok of grooming: red scare.

Accusing parents who have to raise their voices to be heard at school board meetings of being domestic terrorists: not red scare.

Their reaction doesn’t prove their guilt, but the finely orchestrated way they’re reacting is… convincing.

The only appropriate response to people who are opposed to protecting children from undue sexual contact at a young age and the protection of the rights of their parents to be involved in their development can be summed up in a short, simple phrase.

QAnon only lives in the minds of The Left. Even on The Right, QAnon isn’t really a thing; not saying that QAnon doesn’t exist.

“a modern-day version of the “red scare,” where there is a child predator/groomer around every corner and a Democrat willing to coddle them.”

Why do you think this takes a minimum of two people?