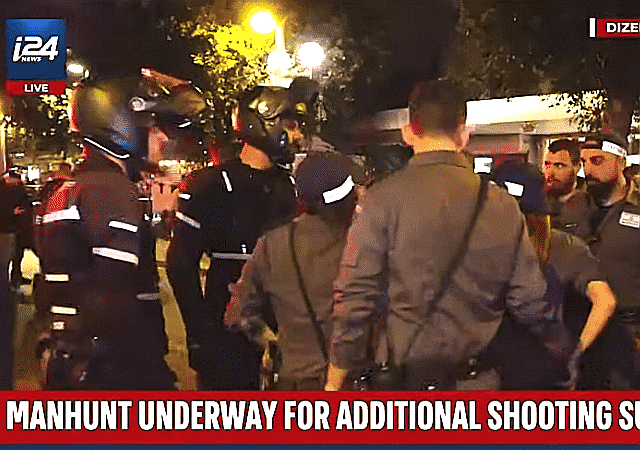 Israel is in the midst of a terror wave as the city of Tel Aviv was hit by another deadly attack. Two Israelis were killed and 15 injured when a Palestinian terrorist opened fire on a bar in the city’s busy Dizengoff Street on Thursday evening.

The two victims were identified as childhood friends Tomer Morad and Eytam Magini, both aged 27.

The terrorist, named Raad Fathi Hazem, was eliminated following a manhunt mounted by the Israeli special forces on Friday morning. He was found hiding in a Jaffa city mosque, just a couple of miles from the attack scene.

Shehab News publishes images of "the martyr Raed Hazem as he entered a mosque in Jaffa before his clash with the occupation and his martyrdom." pic.twitter.com/WabZuA3vpi

Thursday’s incident is the latest in the string of deadly terrorist attacks, which began in the run-up to Ramadan, the Muslim month of fasting. The surging Palestinian terror wave has claimed 13 innocent lives in recent weeks.

The Times of Israel reported the Thursday’s terror attack:

Two people were killed and several were wounded as a gunman opened fire on a bar in central Tel Aviv Thursday evening in a deadly terror attack, the latest eruption of violence to strike Israel in recent weeks.

The shooting took place on Dizengoff Street, turning an area crowded with people out for Thursday night at bars, restaurants and cafes lining the popular thoroughfare into a scene of chaos and panic.

As the street filled with ambulances and rescuers, police carried out searches for the gunman, who witnesses said fled the scene and disappeared into nearby alleys, going door to door and telling people to stay inside and lock their doors.

The attack began when the gunman walked up to Ilka, a popular bar with a large outside seating section, and opened fire. (…)

Ten people were rushed to the nearby Ichilov Hospital with gunshot wounds, two of whom were later declared dead, the hospital said. They were both reported to be civilians in their 20s.

Four others were listed as critical and were undergoing surgery, according to the hospital. Two were seriously injured, and two were mildly hurt.

The Israeli security forces are gearing up to counter the Palestinian campaign of terror. “We are granting full freedom of action to the army, the Shin Bet and all security forces in order to defeat the terror,” Israel’s Prime Minister Naftali Bennett assured on Friday.

The Israeli news website Ynetnews reported the details of the security operation that finally led to the killing of the terrorist:

Security forces early on Friday killed the suspected gunman who opened fire on a busy Tel Aviv street the evening before, killing two and wounding others.

The forces from the Shin Bet internal security agency and police special anti-terror unit Yamam located the gunman near a mosque in the Jaffa quarter of the city and killed him in an exchange of fire. There were no casualties reported among the security forces.

He was identified as 28-year-old Ra’ad Hazem, a resident of the Jenin refugee camp in the northern West Bank who was in Israel illegally after being denied an entry permit under security considerations due to his affiliation with the al-Aqsa Martyrs’ Brigades.

He was located by Shin Bet forces who called on him to surrender but he opened fire and was killed by the troops.

Last year’s Ramadan was also marred by Palestinian terrorist attacks and street rioting in Jerusalem and other Israeli cities. Radical Muslim clerics often use the weekly Ramadan sermons to incite violence against Jews and Israelis.

Childhood friends Eytam Magini and Tomer Morad. Both 27-years-old. Both murdered yesterday at a bar in #TelAviv by a vile Palestinian terrorist.

The Gaza-based Islamist group Hamas praised the Tel Aviv attack carried out by a terrorist affiliated with its al-Aqsa Martyrs’ Brigades. Hamas’s statement lauded the fact that the “organized resistance is able to penetrate the Israeli security system” and murder innocent Israelis on the streets of Tel Aviv.

The Mosques in the Palestinian city of Jenin praised the terrorist for murdering Israelis in Tel Aviv.

Please retweet this. Let the world know what Israel is dealing with. pic.twitter.com/g7Hv9q2NEj

The Palestinian Islamic Jihad (PIJ) terrorist group issued a statement saying it “blesses” the attack on the Israeli civilians.

This is the father of the #Palestinian terrorist, who carried out the shooting rampage in #TelAviv last night. He is a senior officer in the PA security forces. Here he is, praising his son after the attack, saying “victory is near.”pic.twitter.com/ZhVTXFVy2d

Palestinians celebrated the bloodshed in Tel Aviv by setting off fireworks and distributing sweets, videos, and photos posted on the social media show.

Jenin: Palestinians mourn the death of Raed Hazem after hearing news he was killed by Israeli counter-terrorism forces in Jaffa. Hazem was identified as the shooter in the Tel Aviv terrorist attack Thursday night. pic.twitter.com/HQScHF8L5v

Spontaneous joy in Jenin celebrating the attack and the murdering of Israelis in Tel Aviv. Hamas terror organization praises the attack in Tel Aviv, calls it "heroic operation".
Arabs celebrate with fireworks as manhunt continues. pic.twitter.com/RaKCYHJi7s

While Israel faces a surge in terrorism, the Biden administration is pushing Jerusalem to boost the economy of the PLO-controlled Palestinian Authority.

Israel rejected a proposed White House meeting with Palestinian representatives to deal with the “economic crisis” faced by the PLO-run administration, the Israeli media reported Friday.

The Biden administration’s concerns for the Palestinian ‘economic hardship’ come as Palestinian Authority continues to fund the pay-for-slay scheme that rewards convicted terrorists and their families with monthly ‘salaries’ for committing terrorism against Israelis.

Israel rejected a proposal by the United States to host a meeting with Israeli and Palestinian national security advisors at the White House.

The proposed forum would have focused on economic and security coordination between Israel and Palestinians, Haaretz reported.

In light of the economic crisis in the West Bank and amid growing Israeli-Palestinian tensions, the proposal was part of Washington’s efforts to shore up the Palestinian Authority.

According to the Israel-based watchdog Palestinian Media Watch, the “Palestinian Authority Martyrs Fund” paid out more than $150 million to terrorists and their dependents in 2020. The economic aid provided by the U.S., European, and other Western governments is diverted to finance the pay-for-slay scheme.

Bury the human-shaped offal head down, with a slice of ham in his mouth.

What good would that do? The idea that Moslems have some horror of being buried with pig products, or that such a prospect would deter them from committing terrorist acts, has no basis in fact.

“What good would that do?”

People do lots of things that really don’t do any good but the act of doing it makes you feel better.

Better to relocate the Arabs someplace where their vicious attacks can be dealt with appropriately. I suggest Xinjiang, China.

That is right, except how about the Arab countries these “Palestinians” are actually from, or descend from? Those countries’ governments created this problem.

This is an unrelenting campaign that aspires to commit genocide against Israeli Jews. And, these attacks are aided and abetted by the vile Dhimmi-crats and European dhimmi, Leftist useful idiots who promote the evil, despicable lies and slanders that deny Jews’ historical ties to Israel — ties which pre-date the founding of the supremacist and totalitarian ideology of “Submission” by millennia — by slandering Jews as alleged “colonizers,” “occupiers” and “settlers” who are allegedly practicing “racism” and “apartheid” against the alleged “native” Arab Muslim victims. Call these slanders what they are — evil attempts to rationalize, excuse, whitewash, justify and enable terrorist attacks against Jews.

This violence will never end until Muslim supremacists and terrorists realize that their utterly contrived and fallacious victimhood mythologies carry no political currency and influence. But, of course, the vile Dhimmi-crats and European Leftist dhimmis are totally invested in promoting this propaganda, no matter its manifest evil and falsity.

These attacks do appear to be occurring more now that Bibi is no longer in the Israeli government.

Good news: here are your virgins

Bad news: It’s a game of Russian roulette for a variety of STDs that you will suffer from for all eternity

May your genitals rot the eff off.

These people are useless welfare recipients. Their free water should come with additives to improve their temperament and lower new births to a trickle. maybe a sufficiently low birthrate would lead to their unwillingness to use children as dumb bombs?