The maneuvers coincides with the Russian buildup along the Ukraine border. 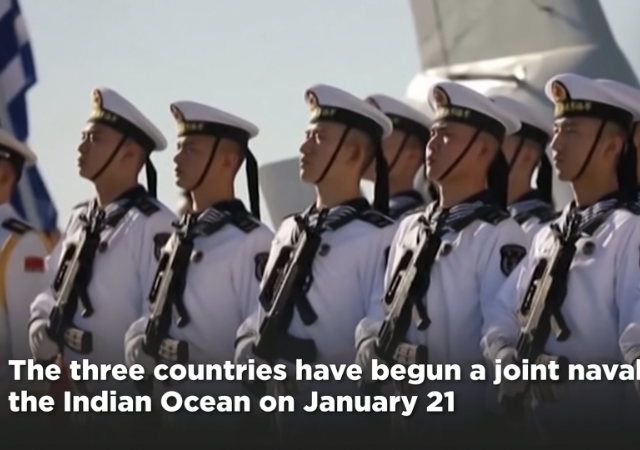 As President Joe Biden fails to create a coherent strategy to defend the U.S. and the West against surging Chinese militarism, Iran, China, and Russia have launched war games in the northern Indian Ocean. On Friday, Russian and Chinese fleets converged on Iran’s Chabahar port to stage naval and air drills, media reports say.

The trilateral war games are taking place “amid speculation that the three countries are teaming up in the face of pressure from the US,” the South China Morning Post noted. “The [Russian] Pacific Fleet said that a naval group including a missile cruiser, a large anti-submarine warfare ship and a large sea tanker had anchored off Chabahar, Iran’s only oceanic port, on the Gulf of Oman,” the Hong Kong daily reported ahead of the drill.

The military maneuver coincides with the ongoing Russian mobilization along its border with Ukraine. The U.S. and other intelligence agencies are warning of an imminent invasion of the beleaguered country. China has also stepped up its military build up, threatening its invade neighboring Taiwan and building artificial islands equipped with air fields and army bases to project its power in Asia and Pacific.

Iran’s state TV said 11 of its vessels were joined by three Russian ships including a destroyer, and two Chinese vessels. Iran’s Revolutionary Guard will also participate with smaller ships and helicopters.

The report said the maneuvers would cover some 17,000 square kilometers, or 10,600 miles, in the Indian Ocean’s north, and include night fighting, rescue operations and firefighting drills.

This is the third joint naval drill between the countries since 2019. It coincided with a recent visit by Iranian President Ebrahim Raisi to Russia that ended on Thursday.

“Improving bilateral relations between Tehran and Moscow will enhance security for the region and the international arena,” Raisi said upon returning from Russia on Friday, the official IRNA news agency reported.

As the Biden White House holds increasingly pointless European Union-sponsored nuclear talks with the Mullah regime to restore the Obama-era nuclear deal, Iran, while racing towards a nuke arsenal, is joining the Chinese-Russian military axis.

The war games in the Indian ocean come days after Iranian President Ebrahim Raisi met Russia counterpart Vladimir Putin in Moscow, where he declared that his regime knows “no limits for expanding ties with Russia.”

In recent years Iran has increased military cooperation with Russia, and has allied itself with Moscow in Syria’s decade-long civil war to keep the Bashar al-Assad regime in power.

With its growing economic and military muscle, China wants to extend its influence in the oil-rich Middle East and has chosen Iran as the bridgehead. In 202o, China signed a $400 billion trade and security deal with Iran.

Last week, Beijing announced that it is beginning with implementation of the deal. China says “it would begin implementing a strategic agreement with Iran, strengthening economic and political cooperation between the two countries as Beijing blasted Washington’s sanctions on Tehran,” the Times of Israel reported on January 15.

Though “the final terms of the strategic partnership agreement remain secret,” as the D.C.-based journal Foreign Policy notes, some details of the China-Iran pact have surface in the media.

The hundreds of billions of dollars, which will largely end up on the coffers of Iran’s ruling Mullahs, not only give China access to Iranian oil and natural resources, they also allow the Communist regime to access Iranian army and air bases, news reports say. China intents to station 5000 “security personnel” in Iran to “protect” its investment, the Indian business daily Financial Express revealed at the time of the signing of the deal.

Okay. In a comparison to the Central Powers, Iran is playing the role of Ottoman Turkey. My question is who is playing Germany and who is Austria-Hungary? Russia and China both have issues, so perhaps the role of Germany will be left uncast this time around.

While Russia is currently out of favour, Iran and China appear to be Biden’s favourite dictatorships.

I guess the plywood shortage is over…..

The Secret Service is reporting an increase in encounters with nasty-looking sixth-graders demanding the *resident’s lunch money.

Anyone falling for this needs to do some serious study of naval power. This ain’t a demonstration of it.