“At 3 o’clock, about eight minutes ago, our LGBTQIA+ teammates at Disney asked for our solidarity and support, including our company’s support in opposition to the Parental Rights in Education bill” 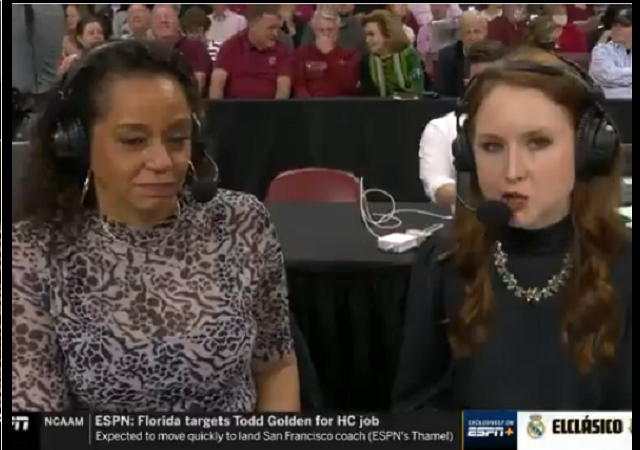 ESPN is officially a lost cause. The sports (?) network long ago leapt on the woke bandwagon with a vengeance.  Although we occasionally hear murmurings from ESPN management that they want to return to focusing on sports at their sports network, their parent company, the wokest place on earth, Disney is having none of it.

This time they are taking aim at Florida’s parental rights’ bill, a bill that is very popular despite media attempts to lie about its contents.

To my mind, this bill doesn’t go far enough in setting the cut-off at third grade.  Fourth grade (age 9-10) is still far too early to “teach” about sexuality or sex .  . . replete with graphic ‘cartoons’ of same-sex oral sex.  I’m not sure there’s a need for this to be “taught” in schools at all.

But over at Disney’s ESPN, they are in mourning—holding a ludicrous ‘moment of silence’—over the Florida legislature’s move to protect our very youngest and most innocent and to return decisions about when children learn about these things to the parents.

Note that the broadcasters don’t seem overly thrilled here, and they are very clear that the order for this lunacy came straight from Disney.

ESPN’s broadcasters for the NCAA women’s basketball tournament took a moment of silence in protest against the Florida bill that made it illegal to teach sexual orientation and gender identity to pre-K through 3rd graders.
pic.twitter.com/ec7J1xGd9S

"There are things bigger than basketball … Our LGBTQIA+ teammates at Disney asked for our solidarity and support." pic.twitter.com/d0xISZvNUh

Transcript via the Blaze:

“There are things bigger than basketball that need to be addressed at this time,” Lyle said after halftime. “Our friends, our family, our coworkers, the players, and coaches in this community are hurting right now. At 3 o’clock, about eight minutes ago, our LGBTQIA+ teammates at Disney asked for our solidarity and support, including our company’s support in opposition to the Parental Rights in Education bill in the state of Florida and similar legislature across the United States. [emphasis mine]

“A threat to any human rights is a threat to all human rights,” Peck said, before telling the basketball audience they would be taking a “pause” during the broadcast to “show our love and support for our friends, our families, and our colleagues.”

Watching the clip, I got the impression that the broadcasters were not really happy to have to do this (who can blame them?); in fact, it rather reminds me of a hostage video.  I also found it . . . interesting that the broadcasters didn’t use the anti-factual smear, “Don’t say gay” bill, the radical left has adopted to mislead the public about the bill.

Maybe this is Disney’s response to Florida governor DeSantis letting them know that their divisive, destructive woke lunacy will not affect his decisions.  If so, it’s a flop because the main message they send is don’t look for politics-free sports coverage at ESPN any time soon.

For me, it is not about looking for anything from ESPN, they are dead to me, not relevant.

From a cute little mouse to a filthy commie rodent.

Walt is spinning in his grave.

Interestingly, Walt Disney was one of the most vocal anti-Communist forces post-WWII. He hated the commies and saw great danger in the socialism component to unionization. He was afraid that unionized workforce in Hollywood would pull the industry far to the left.

Boy, did he get that right.

“our LGBTQIA+ teammates at Disney asked for our solidarity and support,”

Anyone who was tempted to believe Disney’s claims it was getting less political; congratulations on this reminder about reality and a reminder that anime is vastly superior and not woke.

Allegedly they’ve added a gay kiss into the upcoming KIDS Buzz Lightyear movie explicitly because of this nonsense.

It’s not insanity. It is evil.

The good news is it is destroying the Disney brand. I have a large DVD collection; it is now slightly smaller because I destroyed everything Disney. I do not want my grandchildren hooked on Disney and sucked into their lies.

This “woke” pedo-friendly bullsh*t is ruining the Disney brand. Disney’s stock price has gone from over $197 last year to $138 today. These leftist idiots are destroying the company. Disney stockholders need to boot these lunatics before they burn the entire Disney legacy to the ground.

Please take a look. And then download to pass on.

Hmm, now how come I dumped college/pro sports from my life?
Oh yeah, this crap!

I saw that in person amd then I changed the channel and never will watch womens basketball again
And that’s a tough one as my dautplayed D1 basketball
She won’t watch either.
Dead.to.me
Just wait till the men take the womens basketball over, and they will, like swimming

Alex will I not only take two minutes of silence when these bimbos are not talkiing, I’ll take five!

Know Disney wants your kids to be very comfortable with the LGBQXYZ lifestyle.

If Republicans were smart, they would slash the copyright protections for works of art to back to the original 14-years.

when walt was alive “disney” was about magic–the “magic” kingdom, etc–and the “magic” was love–he loved what he was doing–creating works of art to entertain and amaze, to fill with wonder and joy–when was in school years ago, many of the art majors/graphics majors hoped to work for disney, to be a part of that legendary creative studio that produced literal miracles–one drawing, one frame at a time–with incredible craftmanship, care and attention to detail–the best of the best

not long after walt’s death the company began to drift away from the creation of art and magic and wonder–instead of upholding walt’s legacy of excellence and care disney began sliding into “messaging” and “indoctrination”–and apparently their decline has continued–they’ve lost the magic, the element that raised them to the gold standard in their industry–they’ve fallen instead to just another third-rate production company for “social” propaganda

As one who’s childhood was defined by, and enriched by The Wonderful World of Disney every Sunday evening, I am sickened to the core by this absolute desecration of Walt’s legacy. Our society is so degraded that I honestly don’t know if it can be redeemed.

I just assumed that this was in support of the 90+% of all women basketballers who are lesbians. This only shows they know their audience,