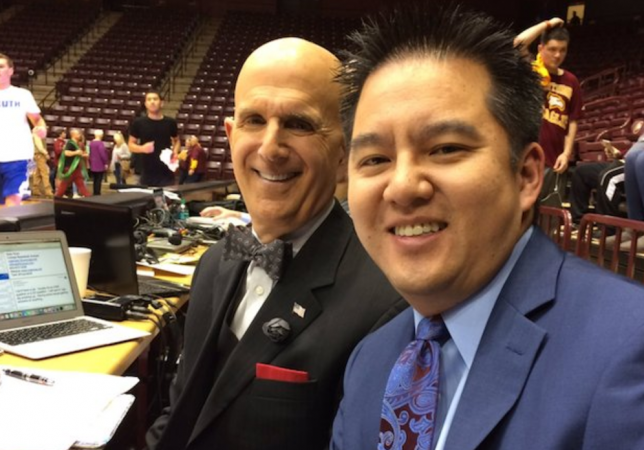 Here’s another one for our never-ending game of Progressive or Parody.

In post-Charlottesville riot America, Asian-American names are subject to discrimination in order to placate the ignorant. Case in point: Robert Lee.

ESPN confirmed Tuesday night that it had decided to pull an announcer from calling a University of Virginia football game because his name is Robert Lee. This Robert Lee is Asian.

“We collectively made the decision with Robert to switch games as the tragic events in Charlottesville were unfolding, simply because of the coincidence of his name. In that moment it felt right to all parties,” reads the ESPN statement posted at t he popular Fox Sports college-football blog Outkick the Coverage.

Mr. Lee had been scheduled to call the Cavaliers Sept. 2 game in Charlottesville against William and Mary.

“It’s a shame that this is even a topic of conversation and we regret that who calls play by play for a football game has become an issue,” ESPN said in its statement.

The New York Times is upset, not because Lee was pulled, but because in doing so, they handed the right a bucket-load of ammo

Obligatory: Tucker Carlson on the controversy:

Just last week, student groups at USC attempted to leverage Charlottesville in an effort to malign the school’s mascot Traveler, for the unforgivable sin of having a name similar to Robert E. Lee’s horse, even though they’re spelled differently and are in no way related.

I would ask when this idiocy will end, but I’m not sure I’m prepared for the answer.

Just received this email from an ESPN executive re the Robert Lee controversy. pic.twitter.com/OuBORlWO9f

I hope these guys looked at the headers on those email messages. Anyone can spoof a return address on an email. This whole thing feels like a troll. I certainly wouldn’t put it past the suits at ESPN to take a knee jerk action like that, but I’m not seeing a lot of verified corroboration for a story as viral as this one is.

You expect the mainstream media to report Leftist idiocy? Remember, they worked overtime to suppress a myriad of scandals involving the natural-born British East African and sHrillary, and were so successful that most libtards never heard of them.

I saw the interview with the Outkick rep. Get your facts *before* you react.

Getting “facts” was my whole point. At the point where this thing went viral, all that was out there was what the Outkick blogger had written. Everyone was pointing back to his post. The only independent verification was the Griswold Tweet. All of this was based on email. My point was that anyone can construct a spoofed email with relative ease (look at the incidence of phishing) and this felt like a troll. Clearly, with the light of a new day, ESPN was, in fact, this moronic (candid “raised the notion of switching games” aside). It’s bad enough that the mainstream media in general has lost any ability to do their homework and report facts. Those of us who oppose that sort of “journalism” should not commit the same sins when the narrative suits our worldview.

I’ve looked at my calendar twice. It’s not All Fool’s Day…

Another Asian-American getting the short end of the stick.

I’m sorry but I just had to fix thisa for you.

“Another Asian-American getting the short end of the chop stick.”

I know its wrong but I couldn’t resist!

I hope this man SUES them – and wins! This is discrimination against Asians – that is a VERY common name in the Asian community!

This is the type of thing that should be taken to court to stop the madness! Get these morons’s attention – hit them in the POCKET BOOK.

These people, ever so removed from reality, expect that we defer to their intelligence, proven wrong over and over, and illiberal under it all.

These were the people that Orwell warned against.

So what’s next, remove all players named Lee? All Americans named Lee? I could not believe thus when I heard it. ESPN joins the other entities banned from my TV. I’m down to reruns of NCIS and Mayberry.

At least you avoid the propaganda – and paying for it

These people are retarded. There can be no other explanation. Mental illness on full display.
Normal people just don’t think like this.
Lawsuits, cord-cutting, shame, doesn’t matter , they”ll keep doing this. They’re nuts.

Here’s a version performed by Annie Ross accompanied by the Count Basie Orchestra in Hugh Hefner’s Chicago penthouse in 1959. Among those looking on in addition to Hugh are Jon Hendrix and the the incomparable, who Frank Sinatra once called the greatest singer ever, Tony Bennett.

I have begun to suspect that “The Onion” isn’t a parody site, but one authored by time travelers trying to warn us.

Malignant wackos.
The best revenge is living well. And living without espn.

espn should pull ‘this’

Don’t forget that ESPN just held a fantasy football auction, complete with an auctioneer. They had to apologize since it resembled a slave auction.

The stupidity is breathtaking!

If it costs them nothing to deny individual dignity, lives deemed unworthy, etc., and there is progress, then they are hardly stupid. Unprincipled (e.g. Pro-Choice), yes, but not stupid.

Something similar happened when progressive liberals went after all near and far associations of the “white” Hispanic. Apparently, they believe in social justice, not justice. Just as the advocate for color diversity, not diversity; abortion, not life; “=”, not equality; war, not peace; submission, not reconciliation; refugee crises, not responsibility; etc.

Who made it an issue, ESPN? Name names or you are lying through your teeth.

All UVa students and fans just got insulted by ESPN.

Answer: It won’t end, it will just get more and more ridiculous.

muammar gaddafi is alive and well and really is a great guy. No I am not talking about he Libyan dictator the fellow I know lives in Port Au Prince Haiti What his parents were thinking I dont know but I do know my friend . To paraphrase MLK I look at the content of someones character rather than perceptions of idiots .

“We collectively made the decision…” A classic example of “Progressives” hurting someone in the name of protecting them.

Unless this is a total parody, next focus should be the demand that any and all African-Americans with the last name of “Washington” or “White” (or “Green”…anything except “Brown” and “Black” which are OK) must immediately be required to change their names or forever risk being labeled as slave-owning advocates of White Supremacy.

The number of “Robert Lees” among Chinese-, Korean-, or Irish-descended Americans is probably legion. I agree that this sportscaster should sue.

You asked when it would end. Don’t hold your breath. It’s only just beginning.

More than a few folks online have begun to wonder when the calm and collected, balanced and totally-hinged Leila Jackson-Lee will change her doubly-offensive last name.

Actual grown ups at CNN were unavailable for comment.

In other news, jade colored tea cups, flatware and crockery are racist tokens. All items should be smashed, removed from retail stores and online and destroyed. Amazon and Google have already done so and have added it as a firing offense for any employee to own such items (in addition to firearms and confederate flags) Existing owners of items fitting this description should stand in the streets and ask forgiveness for their white privilege.