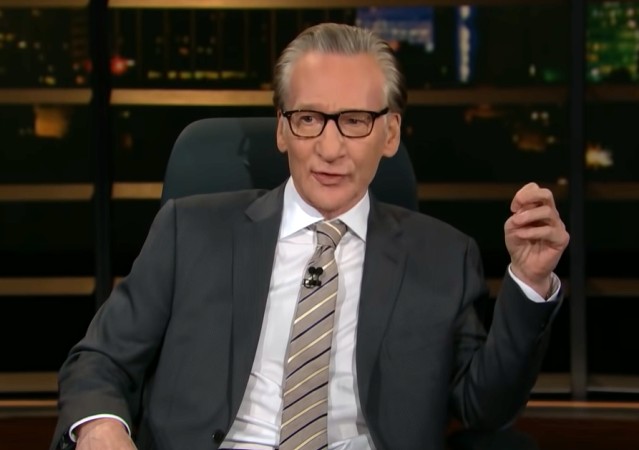 On Friday, Maher, who has also been one of the most vocal critics on the left of the “woke” radicals in the Democratic party and how in his view they’re dragging it down, again defended DeSantis, and more broadly Republicans, “who feel that there’s too much talk in lower grades” about sex and sexuality.

In an “Overtime” segment of the “Real Time” program that featured Newsweek deputy opinion editor Batya Ungar-Sargon and NY Times opinion writer Frank Bruni, Maher first began with reading a question from someone who was presumably a viewer of the show who wondered if Florida’s parental rights bill, which critics have falsely dubbed the “Don’t Say Gay” bill, was “designed to trap Democrats into saying they support teaching young children about sexuality.”

Maher went on to explain how in his view the stance of people who supported the bill was rational and made sense.

“I guess it’s a reaction to Republicans who feel that there’s too much talk in lower grades,” he stated. “They’re talking about kindergarten to third grade. So we’re talking about very young kids who, you know, as always with this stuff, you know this. It’s not like there’s no kernel of truth in that maybe kids that young shouldn’t be thinking about sex at all. ”

“It’s not like you’re not allowed to literally not say ‘gay,’” Maher pointed out. “But they just don’t want teachers talking about it. They think it’s the province of parents.”

When he turned to his panelists for their thoughts, Bruni noted that he himself was a gay man and that though his “main concern . . . is not that second-graders know who Harvey Milk is,” he felt this was not a problem significant enough to write a bill over.

“This is — this is not going to improve Floridians’ lives,” Bruni opined. “This is not an urgent problem. This is a dodge. It’s another culture war that’s meant to score cheap, easy points rather than really solving Americans’ problems.”

At one point Maher rightly clapped back at that predictable assessment, noting that the radical left claimed CRT was just about “teaching history” but then pointed to comments from public school teachers who said they didn’t want to go on teaching if they were going to be forced to separate their students by race and make one group feel like “oppressors.”

“It is going on,” Maher said on the teaching of CRT, with the insinuation clear that on issues like that and the concern that kids will be groomed by teachers in the classroom when it comes to sexuality and transgenderism, that where there’s smoke there’s fire.

Ungar-Sargon’s opinion was that the bill didn’t represent an attempt by Florida Republicans to create a “wedge issue” at all, noting that there’s been a broader movement over the last couple of years from parents to re-establish themselves as a prominent voting constituency that politicians better listen to.

Watch the full segment below:

As to the answer to the question of whether or not DeSantis had this bill introduced as a “trap” for the left, he noted during a public appearance a couple of weeks ago when asked about it that it wasn’t on his list of legislative priorities but that he had a gut feeling even before he’d read the bill that the media/left’s characterizations of it were way off:

.@GovRonDeSantis weighs in on the bill that doesn't say what the media says it does.

"I'm like 'there is no way it's true.' I didn't even look at the bill yet. I just knew it wasn't true. So you actually look at the bill, It says no sexual instruction in grades PreK-3." pic.twitter.com/KbHkbkiKFy

Besides, as recent history has reminded us, leftists are pretty good at trapping themselves, as we saw during that now-infamous Virginia gubernatorial debate moment from September 2021 when Democratic nominee Terry McAuliffe admitted during a live broadcast that “I don’t think parents should be telling schools what they should teach.”

When the Florida gubernatorial debates eventually start later this year, it’s going to be fascinating to see whoever DeSantis’ eventual opponent is try to explain why it’s DeSantis and the Florida state legislature who are in the wrong here, especially at a time when parents are more motivated than ever to speak out against public school overreach when it comes to the teaching of controversial subject matters to children.

“he felt this was not a problem significant enough to write a bill over.”

“Absolutely no need to waste your time coming in, Inspector, there’s no significant gambling taking place in Rick’s Café Américain.”

They have moved so far left they have passed the Tropic of Capricorn.

Kindergarten through third grade (8 years old) is far too young to let the transgender activists tell the kids that it’s cool to be transgender.

8-year-old kids just need to be little kids. When adults push little kids into talking about sex, they are grooming them to become victims of sexual assault.

Maher is a liberal but not a radical Marxist liberal

The fact that a law was needed to stop this is telling enough. If you have children in public schools, get them out immediately!

Fourth grade should be interesrting

It sure is in South Park, CO.

Ok, smart guy, if this isn’t the biggest problem in Florida governance, then what IS ? Either spit out what you think is the problem in Florida that they should be solving rather than teachers grooming little kids to be good little LGBTQ soldiers or STFU

Back when I was 29 I wanted to “diddle” a “kid,” actually she was a lovely 19 year old. I decided that time would solve that problem. It did. Took a while. But we started dating when she was 37 and got married a few years later.