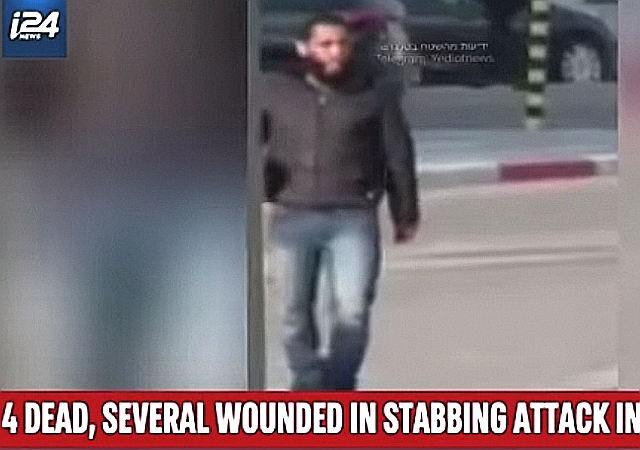 Four Israelis were killed and several injured on Tuesday in a suspected Islamic terrorist attack. The ramming and stabbing attack in the southern Israeli city of Beersheba was carried out by an Islamic State sympathizer who had recently been released from prison.

The four victims murdered in the attack were named as “Doris Yahbas, 49, a mother of three, Laura Yitzhak, 43, also a mother of three, Rabbi Moshe Kravitzky, a father of four, and Menahem Yehezkel, 67, a brother to four,” The Times of Israel reported.

The Israeli media said the attacker was identified as Mohammad Ghaleb Abu al-Qi’an, an ISIS-linked jihadi who served a four-year prison sentence for terror-related activities.

The killing spree ended when the attacker was taken down by two armed Israeli civilians who happened to be at the scene. “Qi’an was shot after being confronted by armed passersby in the area,” the Israeli TV channel i24News reported.

At least four people died and others were hurt, some seriously, in a ramming and stabbing attack in the southern city of Be’er Sheva on Tuesday.

The man ran to a second and then third location nearby and stabbed people there as well before he was shot.

The assailant who was identified as a Bedouin from the Negev city of Hura, a citizen of Israel. He was shot on the scene by a bus driver who was in the area.

Prime Minister Naftali Bennett summoned a meeting with police and security agencies to discuss the attack and the concern over possible outbreaks of violence during the holy month of Ramadan.

According to initial reports, the man, a resident of the Bedouin city of Hura, near Be’er Sheva had recently been released from prison and known to have been a sympathizer of the Islamic State. Some reports claim he had in the past, tried to join IS forces in Syria.

Graphic video of the stabbing attack in Beersheba. The attacker first stabbed a woman to death at a nearby gas station, then rammed his vehicle into a cyclist, got out, and stabbed several people at the BIG shopping center. pic.twitter.com/L2hRbpGWOw

Palestinian terrorist groups cheered the latest killing of innocent civilians, including women and the elderly, as a “heroic” act by one of their own. The Jerusalem Post reported:

Hamas spokesman Abd al-Latif al-Qanou welcomed the attack, saying “the crimes of the occupation are met only with heroic stabbing, ramming and shooting operations.” Tuesday was also the anniversary of the assassination of Hamas founder Ahmed Yassin.

The Palestinian Islamic Jihad terrorist movement congratulated the attack, saying “the operation comes in the natural context of responding to the crimes of Zionist terrorism in the occupied Negev.”

The attack comes as Israel and the region gear up for Ramadan, the Muslim month of fasting, which will begin next week. The last year’s Ramadan celebrations were marred by Palestinian rioting and violent attacks on Jews in Jerusalem and other Israeli cities. The 2021 Ramadan street violence was followed by relentless Hamas rocket fire on Israeli towns and cities.

The next article about Ukraine shows a bombed out
building, that is what we need to see in Gaza and the West Bank. There must be severe consequences for these acts. Israel treats this stuff like ordinary crime, when it really is war. The only way to bring an end to this is to kick the living shit out of both those who commit the acts and those who support it in any way.

Israel does treat it as war. They would like to wage war properly, but…
They have to think about keeping the rest of the world off their backs a little bit.
They also are tainted by Progressive thinking (modernism, post-modernism) that keeps them from simply going full-Jericho on the Palestinians.

No, Israel is not being held back by what the rest of the world thinks, but by its own judiciary and legal establishment, which will simply not allow deliberately bombing civilian buildings. They call it a crime, and order the IDF not to do it.

They aren’t lucky to have such lousy despicable neighbors but they are fortunate to have respect for 2nd amendment-style necessities.

No, they don’t have respect for the RKBA. They don’t recognize any such right. Every armed civilian is armed only by their gracious permission, not by right, and they grant and withdraw that permission at their whim.

One of the two people who shot this terrorist had his weapon confiscated for forensic testing, leaving him defenseless. Since he lives in Samaria, where he is constantly in danger, and since his picture was in the news, so he is now a target, he insisted on waiting at the police station until they would run whatever tests they needed and give him his weapon back. The Israel police refused to let him wait there, and threatened to arrest him if he didn’t leave the police station. Nor would they give him a loaner weapon.

Now tell me, why do they need to test the weapon? What could such a test possibly tell them? Why do they need to know whether it was his bullet or the other shooter’s that killed the terrorist? Is there only one medal to be awarded, and they need to know to whom to give it?! Seriously, why couldn’t they just shake his hand, thank him for his good citizenship, and send him home with his weapon?

I was not aware of that actually and have now been reading. I guess we take for granted that Israel would have common sense with guns since they literally live in the middle of evil.

Israel’s leaders have treated this much like we treated Vietnam, we and they have not / did not apply enough force. In both cases political hacks have tied their military’s hands.

As to keeping other countries off their backs, those countries are no, and probably never will treat Israel fairly. Does any other country put up with the amount of crap that Israel has suffered?

I concur on the “other countries”, but how much worse would they have it if they ignored that and did go full-Jericho? I think that’s the debate to have.

No worse. The difference is how their own legal establishment and judiciary would treat them.

There is no rational justification for a “Palestinian” state. Only bad ideas, distortions and lies.

There is a Palestinian state. It is called Israel!

The Arabs who usurped the name of Palestinians were trouble-making Jordanians whom Jordan did not want in their country!

Was this even reported in the MSM?

But, but, the U.S. State Department says it is Israel that is committing these human rights violations. . .

This latest attack by an ISIS sympathizer was brought to you by Iran, which provides all kinds of support for ISIS.