These lefties aren’t blind to what is going on; instead, they’ve chosen—until now—to be silent about it 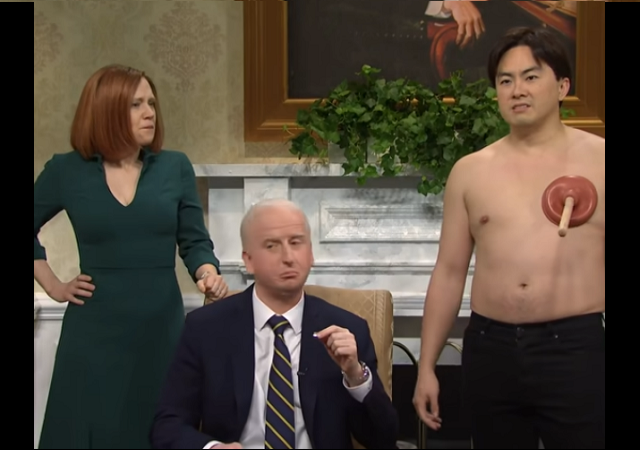 There seems to be a shift happening in leftie world. Not only is Bill Maher pointing out how radical and completely off-putting the regressive left has become, but now Trevor Noah and Saturday Night Live are taking potshots at Joe “I am the Democratic Party” Biden.

There seemed to be some kind of unspoken (or unpublicized) “hands off” the Biden administration pact among all leftwingers, up to and including the once irreverent SNL.

They recently did a skit about the ridiculous nature of the covid mandates and mask hypocrisy, but this time they took aim at the Biden admin directly and mocked their ludicrous TikTok “influencers” summit on the Ukraine war.

Yes, that was an actual thing.

Last month The Guardian proclaimed the Kremlin’s invasion of Ukraine “the first TikTok war,” highlighting Russian celebrities using the platform to speak out against Putin, and Ukrainians placing themselves in harm’s way to put the horrors of war on full display.

If there remained any doubt that the Ukrainian conflict is, indeed, the first TikTok war, it evaporated this week. Vice dropped an investigative piece on a campaign it unearthed “to pay Russian TikTok influencers to post videos pushing pro-Kremlin narratives about the war in Ukraine.”

I guess that was just too much even for the slathering Democrat fanbois at SNL because they turned out a skit about it that is devastating to the Biden administration.

Incredibly, they actually mention the Hunter Biden laptop scandal, including name-dropping Burisma; I would not be surprised if this is the first mention that much of the SNL audience has ever heard of the New York Post scoop.

Granted, the person portraying Biden appears far too lucid here, no wild lies about his storming the beaches of Normandy during his run for the Scranton Senate, no little girls around to sniff, and no weird whispering, but this is leaps and bounds in 21st century terms in daring to mock any Democrat, let alone their sitting president.

Trevor Noah took on the other bit of news that is under-reported: leaders of nations Biden is begging for the oil and gas he’s shut down in the U.S. are literally not taking his phone calls.

Yes, that is reportedly happening, though the WH “disputes” this (for whatever that’s worth).

The de-facto leaders of Saudi Arabia and the United Arab Emirates have declined to arrange calls with US president Joe Biden in recent weeks as the US and its allies have sought to contain a surge in energy prices caused by Russia’s invasion of Ukraine.

According to the Wall Street Journal, citing Middle East and US officials, both Saudi Crown Prince Mohammed bin Salman and the UAE’s Sheikh Mohammed bin Zayed al Nahyan have been unavailable to Biden after US requests were made for discussions.

The ideological fantasists in the Biden admin (up to and including “the big guy” himself) cannot grasp that it is beyond stupid to cut off our own oil and gas so that we can “transition” to green energy . . . while importing the oil and gas we require from foreign, often indifferent or outright hostile, countries.

Biden, it should be noted, promised to destroy our energy sector during the 2020 presidential campaign . . . and people (who are not me) voted for him anyway.

It’s the dumbest foreign, economic, and energy policy since the Carter days of malaise and just accepting the “new normal” of record gas prices under Obama. Americans didn’t accept it in the 1970s, we didn’t accept it when the Obama-Biden administration assured us that gas prices would never again go below $4/gal, and we aren’t about to accept it now.

Maybe even Noah is fed up with the Biden administration being a global laughingstock, neither respected nor feared. Just ignored, laughed at, disdained, and shoved aside.

This is worth watching to the end, Noah’s Trump impression isn’t half-bad, and he appears to get that Trump’s swagger got results, including as Maher noted, Russia waiting until Trump was out of the White House to invade Ukraine.

Looks like even Trevor Noah is getting tired of Biden. He's right, Trump wouldn't take crap from anyone but Biden is the laughing stock of international politics.pic.twitter.com/MxwVwQYI7X

I haven’t seen anything yet about these pieces being banned on Facebook, Twitter, and Instagram, and it’s certainly too early to tell if the floodgates will open and it’s now acceptable to mock the Biden administration.

Even if we never see this sort of thing again, it’s worth noting that these lefties aren’t blind to what is going on nor to how terrible the failed Biden administration is; instead, they’ve chosen—until now—to be silent about it.

SNL got Obama’s memo — Time to replace the vegetable with the black female understudy.

“We have always been at war with Joe Biden.”

I’ve been seeing mentions of this sketch all day. Finally, I gave in an watched it. It wasn’t that funny.

“no little girls around to sniff”

I was almost positive he was getting ready to sniff the make-up girl before she unloaded on Hunter.

Hardy har har. This leftist progaganda show will go back to leftist propaganda as soon as the election is over.

And the horrible beyond insanity, this actually happened.
This was a plan during a war
Really…

Biden’s other plan – Take down Vladimir Putin by crashing the American Dollar.

So, the whole TikTok thing doesn’t look so dangerously stupid in comparison.

I don’t watch any of these people but they’re attacking Biden because he’s not the proper kind of leftist. It has nothing to do with leftism itself. Old white guy is embarrassing to and not helping The Cause.

He’s making them look bad, so they’re trying to throw him under the bus with the rest of the losers. Problem is he’s driving.

Not impressed and dont forget your previous double downs.

That guy really doesn’t do a good Biden. If we didn’t know beforehand that it’s a Biden impression, it would take some time to figure it out. A big part of Biden’s weirdness is how he transitions from soft-spoken to yelling to leaning forward with that squinty-eyed face signalling that he is being serious to other awkwardness.

Doing an out-of-touch senile old fool doesn’t capture it. He completely misses the creepiness of his manner and speaking “style”.

If this is what passes for humor……I didn’t even crack a smile.

I agree — it wasn’t funny, and they didn’t really savage him like he deserved to be savaged. Mostly, they were making fun of TikTok personalities.

….paving the way for Cackles to swoop down and finish the job of laying America to waste.
Can’t we just skip the BS and get down to business?

Not funny. The left has LONG been incapable of lampooning itself much less lampooning itself in an entertaining way. But, it can’t really be funny lampooning anything anymore. Once they started being scolds, it made humor unattainable for them.