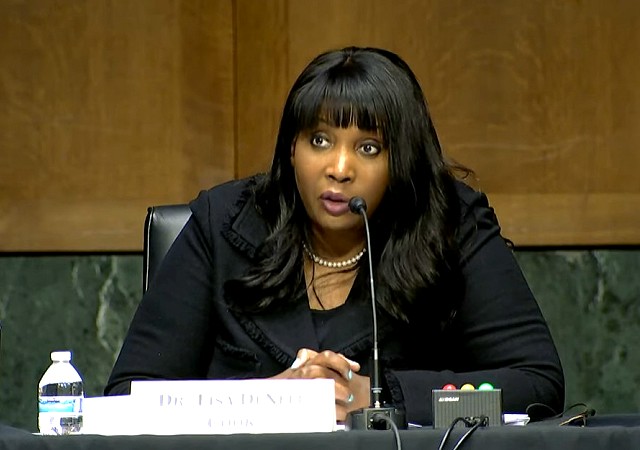 Republican Senators have expressed concerns about all three of them, but their criticisms of Cook are getting a lot of attention from the Usual Suspects on the left and in the media because she’s the first black woman nominated to serve on the Fed Reserve Board of Governors. And as we’ve already seen from Joe Biden’s statement confirming he would nominate a black woman, any questions raised about Cook’s qualifications are being painted as “racism.”

Last week, the Senate Banking Housing and Urban Affairs Committee held a nomination hearing for the three of them. They all faced tough questions, but the line of questioning from some of the Republicans on the committee towards Cook had to do with her “woke” stances and whether or not she embellished her credentials, issues that were highlighted by an investigative report done by The Daily Caller just days after Biden nominated Cook:

Cook claims that she is a macroeconomist, but a review of her published work does not show any peer-reviewed macroeconomic publications.

“In her extensive writing for academic journals and think tank essays listed under ‘publications,’ you will find essentially nothing related to monetary policy, monetary effects on employment, interest rates, inflation, financial regulation or other traditional Fed topics,” wrote Hoover Institution economist John Cochrane in a blog post. “Lisa Cook is superbly qualified — if the job is to bring the Administration and progressive supporters’ racial policies to the Fed. That might mean requiring DEI or ESG practices at banks, or to companies that banks lend to, directing credit to some areas or by race, and strengthening the DEI initiatives and race based hiring and promotion practices within the Fed.”

Cook’s CV lists a publication in the American Economic Review (AER), the top peer-reviewed economics journal in the world. The publication, “Metals or Management? Explaining Africa’s Recent Economic Growth Performance,” would be her single greatest academic accomplishment. However, the paper was actually published in AER Papers and Proceedings (AER P&P), a separate publication that is not peer-reviewed.

The vast majority of Cook’s writing focuses on the effects of racial bias and discrimination. An Axios article stated that “Cook’s academic writing suggests she is a dove,” but a list of her written works does not include titles concerning central banking, financial industry supervision, inflation or monetary policy.

Also, a report published by the Free Beacon indicates that Cook may have made up a story about how she allegedly “led an effort in the 1980s to hold school officials at her alma mater captive until they voted to divest from South Africa.”

Cook, a Berkeley graduate, also appears to be a proponent of cancel culture and getting people fired from their jobs for disagreeing with her:

Lisa Cooks nomination hearing was today. She accused me of “spreading hate” in 2020 and wanted my speech restricted, see screen shot. Why? Was she referring to my tweet back then, where I took the position that defunding the police is absurd. Care to clarify, Lisa Cook? pic.twitter.com/emqhNnXiCv

Cook, an economics professor at Michigan State University who was also a senior economist on President Obama’s Council of Economic Advisers for about a year, has expressed support for reparations and defunding the police, radical positions her Republican critics have characterized as part of a pattern of “hyper-partisan” left-wing activism over the years which they worry will bleed over into her role on the Fed Board, which is supposed to be non-partisan and independent.

On Friday, Fox News host Tucker Carlson did a segment on the issues with Cook:

TUCKER: "A recent investigation by @dailycaller @realchrisbrunet found that Biden's Fed Nominee, Lisa Cook, has inflated her resume to bolster her credentials. She has no experience of monetary policy." pic.twitter.com/zn9gESCg0f

Sen. Minority Leader Mitch McConnell and Sen. Tom Cotton have been two of the more vocal opponents of Cook’s confirmation, citing wokeness and an unhinged nature, two things that definitely aren’t needed on the Federal Reserve:

The Federal Reserve is supposed to safeguard the American dollar, not enforce a radical agenda the far left can’t get through Congress. But President Biden’s nominee for the number two spot wants our central bank to act like a ‘woke’ super-legislature where citizens get no say.

This is who Biden thinks can get inflation under control?

If you think inflation is bad now, imagine someone this unhinged leading the Fed. https://t.co/b74mfFLrTF

Tennessee Sen. Bill Hagerty questioned Cook last week on her “mischaracterizing” of her academic record. Cook claimed it was nothing more than a baseless “anonymous” campaign:

ICYMI: Here’s a snippet from this week’s Federal Reserve Board nomination hearing.

Oddly, before last week’s hearing got underway, Cook did this:

Cook is set to testify before the Banking Committee tomorrow for her Fed board confirmation hearing… https://t.co/YDaP9wky6U

Naturally, the race card got thrown into the mix by Democrats including Sen. Elizabeth Warren during the hearing:

Second favourite part: @SenWarren condemning any attack on the nominees as “racist, sexist and just plain dumb.”@PatricePinkFile claps back saying “Lisa Cook would push the Fed to pursue a divisive, unproven racial justice agenda that prioritizes equity — not equality”

Pres. Biden didn't publicly pledge to nominate the 1st Black woman ever to the Board of Governors of the Federal Reserve, he just did it. Racists attacked Dr. Lisa Cook's qualifications anyway. So stop pretending not making a #SCOTUS pledge would've changed the reaction. https://t.co/rCQlPVpc8h

Keep in mind that as the “racism” accusations fly, Republicans have expressed much fewer reservations over fellow nominee Philip Jefferson, who is also black.

Times rules don't allow me to sign letters. But I believe that Lisa Cook would be a fine addition to the FRB. https://t.co/IfAvTQcdMJ

The fact that her scholarship is mostly about inequality rather than monetary policy is better than OK — we want some intellectual diversity in central banking. And she did some important work on banking overseas too 3/

Considering Krugman’s notorious history of getting things wrong, as far as I’m concerned his seal of approval alone is enough to disqualify Cook from serving on the board. Just saying.

The sun rose in the east. Water is wet. Democrats accuse Republicans of being racist.

Their first and only line of defense

Someone calls me a racist comment know I won the argument.

Looks like Lisa Cook cooked the books on her credentials.

She’s AA all the way.

AA is probably the community college degree Cook actually earned and has absorbed.

What a sinister witch.

When we secede (it’s going to happen), we get to leave Fauxcahontas and Lisa Cook behind.

What we could do is chose someone who could actually win in 2024, drop the “MUH BIG GOVERNMENT” stuff and actually use the power voters give us, take back the government and deal with cultural issues that way.

A civil war is a fantasy, and it isn’t even a good fantasy.

Mzz Warren: why was Cook picked? Answer that and then we’ll talk about racism.

How many years, after Affirmative Action is over, can you look at a person of color in a desirable position and think it was because of abilities?

You are assuming it will ever end.

A fruit jar has more qualifications than she does.

Well, enough pressure got rid of Saule Omarova. Looks like time for an encore.

Democrats can offer only racism and socialism.

Cook is a radical who is grossly unqualified for this position

Democrat accusations of racism (process) have nothing to do with racism (substance). Since nobody can ever win playing defense, why does the eGOP not play offense against the accusers? It almost seems like we are watching a play where the eGOP pretends to resist and then has an “excuse” to drop the resistance.

The Krugman endorsement is the Kiss of Death.

Exactly what I was thinking – if she’s GREAT enough for the wee know nothing then she’s entirely wrong for any meaningful job! And he even points out that she’s unqualified but would as a diversified approach! What an idiot!

How ironic. A person who assumed the identity of a minority race for her own gain is accusing another person of racism. It would be funny if it weren’t so sick, sad, and pathetic.

Yeah, the non native American contributor to Pow Wow Chow should sit this one out.

Why she isn’t immediately called out on this is beyond me.

When you resort to playing the race card, you have no intelligent defense left for a logical discussion and resort to the level of a sinking ship without a rudder!

If nominees don’t want to be criticized they aren’t qualified for the position.