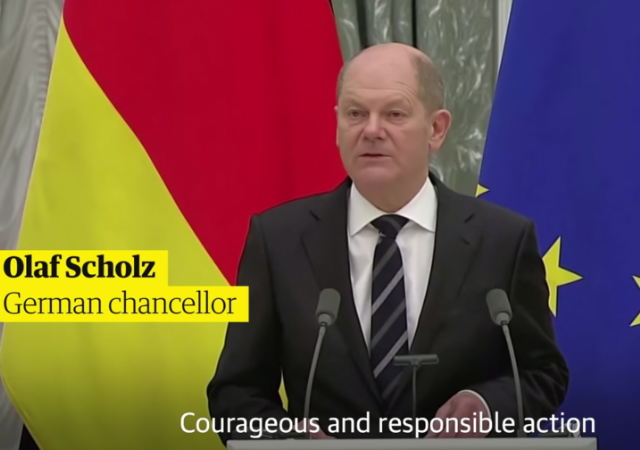 Germany has reacted to the Russian military deployment in eastern Ukraine by halting the Nord Stream 2 gas pipeline. The announcement freezes the nearly-finished $10 billion undersea pipeline that would have cemented Russia’s position as Europe’s top energy supplier.

Berlin’s decision accompanies a slew of sanctions against Russia by the United States, European Union, and other Western nations. The Western response comes as Russian President Vladimir Putin ordered his military into two rebel-controlled regions in eastern Ukraine after recognizing them as independent states.

The 760-mile Baltic Sea pipeline, nearing its completion, would have supplied Russian gas directly to Germany and the rest of Western Europe. This would have been a game-changer for the Putin regime, making Europe even more energy-dependent on Moscow. More than 40 percent of gas to European Union countries comes from Russia.

He told reporters in Berlin that his government was taking the measure in response to Russia’s actions in Ukraine.

“That sounds technical, but it is the necessary administrative step so there can be no certification of the pipeline and without this certification, Nord Stream 2 cannot begin operating,” Scholz said. (…)

Scholz said Germany’s energy needs would need to be reassessed by the relevant government authority.

“The department of the German ministry of economics will reassess the security of our supply needs in light of what has taken place.”

In a rare show of unity, the 27-member European Union “unanimously agreed” on a sanctions package on Russia. The measures will target Russian lawmakers, oligarchs, and state-media outlets.

These are the first in the series of sanctions following Tuesday’s development. European officials dubbed Moscow’s troop movements as an “invasion” of Ukraine and suggested additional sanctions may be on the way, European media reports say.

The European Union announced sanctions taking aim at the 351 Duma legislators who voted in favor of recognizing separatist regions in Ukraine, as well as 27 other Russian officials and institutions from the defense and banking world. They also sought to limit Moscow’s access to EU capital and financial markets.

“This package of sanctions … will hurt Russia and it will hurt a lot,” EU foreign policy chief Josep Borrell said after chairing a meeting of EU foreign ministers in Paris.

“We will make it as difficult as possible for the Kremlin to pursue its aggressive policies,” said EU Commission President Ursula von der Leyen.

In what he described as the “first tranche” of sanctions, Johnson said all three individuals will have their assets frozen and they will be banned from entering the UK.

“Any assets they hold in the UK will be frozen, the individuals concerned will be banned from travelling here and we will prohibit all UK individuals and entities from having any dealings with them,” Johnson said.

While President Biden showed complacency, President Trump repeatedly raised the alarm concerning the ill-advised project. “Germany, as far as I’m concerned, is captive to Russia because it’s getting so much of its energy from Russia,” President Trump cautioned during the July 2018 NATO summit in Europe. Merkel’s Germany pays “billions of dollars to Russia, and we have to defend them against Russia,” he warned, referring to the gas project.

The former president was widely mocked and ridiculed for taking the principled stance. “Trump accused Germany of becoming ‘totally dependent’ on Russian energy at the U.N. The Germans just smirked,” The Washington Post noted on September 25, 2018, referring to a visiting German delegation to the Trump White House.

Germany’s political class is deeply invested and entrenched in the Moscow-run pipeline project. Merkel’s predecessor Gerhard Schröder is chairman of the Nord Stream consortium. The Nordstream AG, as it is formally known, is a joint Russian-German-owned entity. The Kremlin-controlled energy giant Gazprom owns 51 percent of the consortium, followed by Germany-based companies Wintershall DEA GmbH and E.ON, which hold 31 percent of the stake.

Vladimir Putin is the same person he was during our administration.
The only thing that has changed is American leadership.

It is no coincidence that China and Russia are aggressively expanded their sphere of influence since Biden took office. The current U.S. president glaringly displayed his inaptitude and weakness when he ordered a hasty retreat from Afghanistan, practically handing over the country to the Taliban and leaving thousands of stranded U.S. citizens to their mercy. The mainstream media can spin this story any way it wants. Still, the truth remains that under Biden’s leadership, Europe faces its greatest military crisis since the collapse of the Soviet Union.

The EU slapping individual sanctions on legislative members in Russia because they voted for something the EU doesn’t like seems like a bad precedent to set.

Wow, it’s almost like Trump was right all along and Joe Biden* is a mental retard.

The cat’s been out of the bag for awhile now but the news media pretends not to notice.

This is Kabuki theater by Germany.
They will fold.
Putin already owns them.

Correct. Germany didn’t actually cancel the pipeline, they just put a hold on the paperwork. This is easily reversed the moment it becomes convenient. (Or profitable)

Aw come on Irv, you’re confusing me with details.

Forget the details. Just remember that everything is for appearance’ sake. There is no substance.

Now you’re confusing me with facts.

Israel has incredible amounts of natural gas offshore.
They asked the U.S. for loans to build a pipeline to Europe.
Biden administration refused to help.

Now might be a good time to create a strategic partnership with Das Reich. After all, they are going to need something to replace all that sweet, sweet Ruskie gas…and the irony of Israel sending gas to Germany for their ovens isnt lost on me 😉

And yet there are people (some of them theoretically republicans) out there right now pointing to Ukraine and screeching, “See what Trump did!!”

That will probably appear several times in Biden’s State of the Union recital.

Waiting for Biden to get a Nobel Peace Prize nomination for his work in Ukraine.

Well why not? After all Barry got one for doing absolutely nothing in the middle east. Trump didnt get one for bringing North Korea to the table. So it makes perfect sense for Biden getting one for managing to extort millions out of the Ukrainians before the Russkies invaded!!

Germany is beholden to Russia and they know it. Trump was and is right.

Poopy Pants gave the Tally-ban $85B in US weapons. Ukraine wants in on that.

That may be the reason Ukraine President Zelenskyy’s office is decorated with Hunter Biden oil paintings.

What foresight Biden must have had to shut down the Keystone XL pipeline as a pre-emptive economic sanction of Trudeau’s authoritarian actions.

In the words of that great international strategist Pat Benatar, “It’s a little too little, it’s a little too late”. Europe already hamstrung their non-Russian energy supplies and America won’t be riding to their rescue while we have a potato occupying the White House. The worst part is that we will have to hear a constant drumbeat of “Trump did this”.

The drumbeat of ‘Trump’s fault’ will ring hollow to everyone outside the people pushing this propaganda and the true believing d/prog thralls. It’s too hard to sustain blaming a man not in office for over a year.

Well fuck me, Germans showing some back bone eh. Old Vlad must have really fucked off the Germans???

Back bones frozen solid due to cold German winter. They will thaw out in a couple of months.

Clean up your potty mouth!

Clean up your potty mouth! This comment was for Peabody, Not mailman!

This is why Germany only sent a few thousand helmets to the Ukraine. Germany is beholden to Russia.

That would appear to be the case.

Still, a mighty, international slap in the face to Brandon.
That would even have hurt, if he had been a Real Boy.

Kosovo, but the regions that protested the legal authority of the government in Kiev following the violent Western-backed coup without remediation, were not the aggressors, and did not share responsibility.

That said, let Germany find warmth in their role in the coup and energy in their renewable, intermittent Green blight.

I guess there’s not much need of the United Nations. Every country is expected to act independently as if the UN didn’t exist. But Joe’s gonna increase the UN budget anyway because the cost of living is so high in NYC.

Not just the high cost of living, but also the need for personal protection.

This choice may offer insight into why Biden cancelled the Keystone XL backbone of American energy surplus.

After Fukushima Germany decided to shut down all of their nuclear power plants and go green. That suicidal effort is almost complete and there is no going back. At least not quickly. They essentially burned that bridge.

However, their green energy plans aren’t working out very well. Because the green energy model is a seriously flawed unrealistic fantasy. Now they are heavily dependent on Russia for energy.

Evidently the IQ of Germany as a nation has declined considerably the further Left the nation has moved. I have no sympathy.

It’s happening to the US as well.

History tells us nations too stupid to understand the reality of how the world works become subservient and/or extinct nations.

Get woke, get stupid, and take your place on the ash heap of history.

I see Nancy Pelosi is saying that Putin is acting like Hitler.

That should be more than enough to stop Putin — having a corrupt harridan shame him.

Germany was irrational and stupid for working with a communist country, especially Russia to begin with. Also, there is nothing wrong with nuclear power if the plant is built correctly and is regularly inspected. Best fire it up to avoid accepting Russian gas!