Sen. John Barrasso: Biden paving “the way for Russia and Germany to complete this pipeline puts a stranglehold on Europe.” 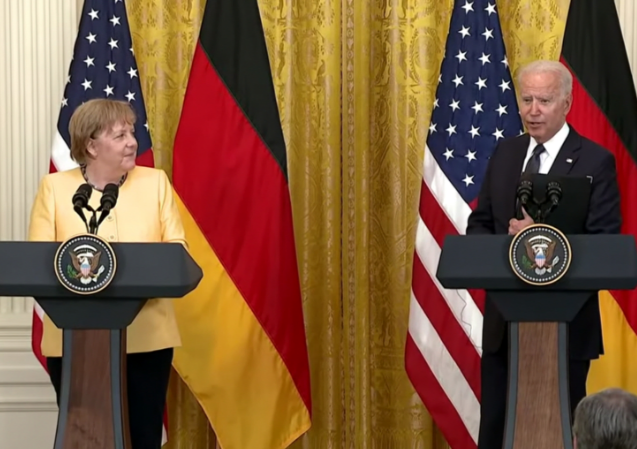 The deal to this effect between President Biden and German Chancellor Angela Merkel came out on Wednesday evening. “The United and Germany have agreed on the deal that allows for the completion of the controversial Baltic Sea Nordstream 2 pipeline without any new U.S. sanctions,” German newspaper Die Welt reported.

The Nordstream 2 is a joint Russian-German project. Kremlin-controlled energy giant Gazprom owns 51 percent of the consortium, followed by Germany-based companies Wintershall DEA GmbH and E.ON, which hold 31 percent of the stake.

The deal is a big win for Russia’s Putin. The pipeline will allow Russia to dominate the European energy market, making Putin a power player in continental Europe.

The US and Germany have struck a compromise over the controversial Nord Stream 2 gas pipeline, according to a joint statement released by both nations on Wednesday.

The pact comes days after Chancellor Angela Merkel’s last official visit to Washington prior to leaving office this September. Officials had talked up the chances of an accord during the visit, and during Joe Biden’s tour of Europe in June.

The two countries agreed to support Ukraine and to sanction Russia if it tries to use energy supplies for gaining geopolitical leverage.

“The United States and Germany are united in their determination to hold Russia to account for its aggression and malign activities by imposing costs via sanctions and other tools,” the statement read.

“Should Russia attempt to use energy as a weapon or commit further aggressive acts against Ukraine, Germany will take action at the national level and press for effective measures at the European level, including sanctions, to limit Russian export capabilities to Europe in the energy sector, including gas, and/or in other economically relevant sectors,” it said.

As part of the deal, Germany agreed to make investments into Ukraine and to actively ensure Moscow and Kyiv extend a gas transit agreement.

Additionally, Germany and the US would invest $1 billion (€0.85 billion) in a “Green Fund” to foster Ukrainian green-tech infrastructure, encompassing renewable energy and related industries, with the goal of improving Ukraine’s energy independence.

“Germany will provide an initial donation to the fund of at least $175 million and will work toward extending its commitments in the coming budget years,” the agreement stated.

The White House decision is not only a reversal of a policy held by President Donald Trump’s administration but also a position held by President Biden’s own Secretary of State, Antony Blinken. “It undermines basic EU principles in terms of energy security and energy independence,” Blinken admitted in March, “It poses a challenge to Ukraine, to Poland, to other countries that we care about.”

The Republicans are bitterly opposed to the Biden-Merkel deal. “The president is giving Russia a new geopolitical weapon. (…) Paving the way for Russia and Germany to complete this pipeline puts a stranglehold on Europe,” Senator John Barrasso said during a recent hearing.

“When it comes to Russia, Bien’s strategy seems to be ‘speak loudly and carry a small stick,’ ” Senator Ben Sasse said on Wednesday.

Richard Grenell, former acting director of national intelligence under President Trump, who also served as the U.S. envoy to Germany, also spoke out against the deal.

Then Merkel outsmarts Biden again to announce the deal after her visit is over.

But, hey, Biden will tout that the Germans love him. Watch for the applause from Blinken that “America is back”…..

And the retweet from @maggieNYT… https://t.co/QdkfKuqlSR

Most Eastern European countries bitterly oppose the project, fearful of Russia’s expansionist intentions. The memory of the Soviet occupation still looms large in these countries. They are also wary of Russians and Germans making deals behind their backs. The Hitler-Stalin pact of 1939 carved up Eastern Europe between Nazi Germany and Communist Russia. The resulting World War brought them under the Soviet occupation, which lasted until the disintegration of the Communist bloc in the late 1980s.

Poland, mindful of this history, has vehemently opposed the project. “Germany pursues a policy of alliance with Russia and they jointly want to tighten the noose around our neck with the help of Nord Stream 2,” the former Polish Defense Minister Antoni Macierewicz noted in 2018.

The eastern European countries had a strong ally in President Trump. The former U.S. president repeatedly warned about the security threat posed by the Russian control of the European energy supply.

“Germany, as far as I’m concerned, is captive to Russia because it’s getting so much of its energy from Russia,” President Trump cautioned during the July 2018 NATO summit in Belgium. Germany pays “billions of dollars to Russia, and we have to defend them against Russia,” he added, referring to the pipeline.

Can’t wait to read the spin on this after 5 years of pearl clutching regarding Russia. I’d say that Biden is Putin’s bitch, but he doesn’t even know what day it is.

A lot of people are wondering who is really pulling the strings at the White House. Who, really, is the president?

It just occurred to me that it must be Hunter Biden.

We would find out if we ever have to launch nuclear missiles. Or maybe our country would just get destroyed.

this is months old. This is a follow-the-money trail situation.

I guess when foreign businesses and tyrants plunk down money into Hunter Biden’s begging cup, and after the Big Guy gets his cut, then they get his blessing.

I suppose the US pipeline builders didn’t pony up millions to Hunter Biden to buy his dad’s support.

Well, live and learn I guess.

Clearly, Biden thinks a pipeline is something like a landfill.

The environmentalists must have gotten lost on the way to the forum. Lots of fossil fuels for me and all that crappy green stuff to the Ukrainians.

Don’t expect Ukraine to get much more than empty promises and eventual annexation by Russia. Putin hasn’t been shy about his desire to annex what they didn’t take the last time.

Looks like the Bidens learned a lot from the Clintons when it comes to selling US foreign policy for fun and profit.

It’s almost as if this administration hates America and is doing everything they can to empower our enemies.

I don’t care for the Germans’ history of pumping gas through pipes.

Germany and Europe more broadly will eventually regret this. Russia will play games with the delivery for political advantage. Even the awareness that they could disrupt deliveries changes and softens the European stance towards Russia.

Once again Russia has been allowed to punch way above it’s weight class.

A pipe line? That sounds dangerous. The only way to transport oil safely is in a tanker such as the Exxon Valdez or a similar ship that holds upwards of 55 million gallons.

Or a railcar. Those never crash.

Oil should be delivered off balconies, with double-barrelled shotguns.

Merkel’s policies , like Obama’s are a Trojan horse.
Pyrrhic victories.