Politico: “Biden administration is keen to maintain a good relationship with the German government.” 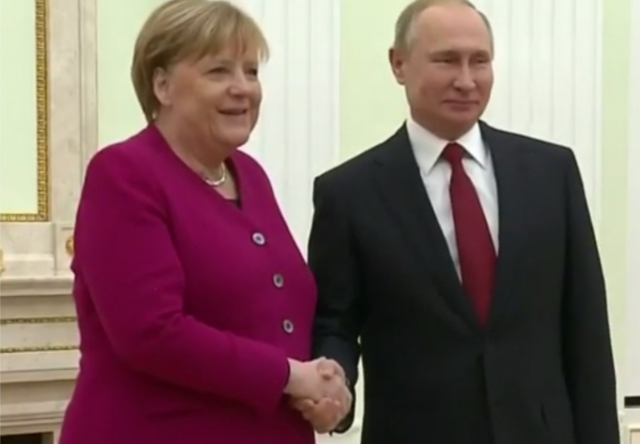 Ahead of next month’s summit between President Joe Biden and his Russian counterpart Vladimir Putin, the White House has waived key sanctions linked to the Russian-German Nordstream 2 gas pipeline. “The Biden administration has decided against sanctioning the company in charge of building the pipeline,” CNN reported.

United States President Joe Biden will waive sanctions against certain major parties involved in the construction of the Nord Stream 2 gas pipeline from Russia to Germany, US media reported Tuesday.

The State Department will inform Congress of the entities that deserve sanctions for their involvement, but it will waive sanctions against two key players so as not to compromise US relations with Germany, according to sources cited by news website Axios.

The Biden administration, which has previously expressed its intention to prevent the pipeline’s completion, is instead expected to impose sanctions on several Russian ships involved in construction.

The Biden White House’s decision not only reverses former President Donald Trump’s policy on Europe, but it is also in sharp contrast with the stance taken by his own Secretary of State, Antony Blinken. “It undermines basic EU principles in terms of energy security and energy independence,” Blinken said in March, “It poses a challenge to Ukraine, to Poland, to other countries that we care about.”

The news will please not only Kremlin but also German Chancellor Angela Merkel. “Biden administration is keen to maintain a good relationship with the German government,” Politico noted while reporting the waiver on Tuesday.

The decision appears to be part of Biden’s promise of ‘earning back’ the trust of European powers after four years of Trump’s presidency. “I know the past few years have strained and tested our Transatlantic relationship, but the United States is determined, (…) to earn back our position of trust and leadership,” he said in his first public address to the European leaders in February.

The 760-mile Baltic Sea pipeline, nearing its completion, will allow direct Russian gas supply to Germany and other countries of Western Europe. This will be a game-changer for the Putin regime making Europe energy-dependent on Russia. More than 40 percent of gas exported to European Union countries already comes from Russia.

The mega-pipeline is not solely a Putin-run operation. The German political and corporate establishment is equally embedded in Moscow’s strategy to dominate Europe’s energy supply. Former German Chancellor and Merkel’s predecessor, Gerhard Schröder, serves as the chairman of Nord Streams AG. Kremlin-controlled energy giant Gazprom controls 51 percent of the company, followed by Germany-based companies Wintershall DEA GmbH and E.ON, which hold 31 percent of the stake.

Trump had repeatedly warned of the security threat posed by Europe’s growing energy dependence on Russia. “Germany, as far as I’m concerned, is captive to Russia because it’s getting so much of its energy from Russia,” Trump said during the July 2018 NATO summit in Belgium. Germany pays “billions of dollars to Russia, and we have to defend them against Russia,” he added referring to the Nordstream pipeline.

The latest White House decision is part of the Biden administration’s attempts to undo Trump’s legacy. Biden’s dealings with the Iranian regime have already reversed the movement towards peace in the Middle East — signified by the Trump-sponsored Abraham accords framework between Israel and the Arab countries.

President Trump at 2018 NATO summit:  Germany is a “captive of Russia’

German will now be beholden to Russia for 50+% of its energy needs and US energy companies lose a major market opportunity.

Well, Germany buys its natural gas from Russia for several decades now (even when the USSR was still a thing) – and although Germany has reduced the amount of gas bought from them, it’s still over 40% – not to mention that Germany buys about 40% of its crude oil from Russia. And here’s the thing: the current pipeline runs through Ukraine, and they blackmail everybody. So with the new pipeline is a win-win for everybody – and changes nothing regarding the gas supply. And why would Germany want to rely on a partner like Biden’s America???

Lose-Lose outcome. Just the kind Biden Harris like. As long as the loser is USA. Then go tell all their buddies how America is not great and never was great.

Not sure how death to Israel and Jews always crops into the logic sequence of leftists, but it invariably does.

Just Remember – It always starts with the Jews. But, it never ends there.

Yeah but coconuts are tropical.

Soldier #1: Found them? In Mercia? The coconut’s tropical!
Arthur: What do you mean?
Soldier #1: Well, this is a temperate zone.
Arthur: The swallow may fly south with the sun or the house martin or the plover may seek warmer climes in winter, yet these are not strangers to our land?
Soldier #1: Are you suggesting coconuts migrate?
Arthur: Not at all. They could be carried.
Soldier #1: What? A swallow carrying a coconut?
Arthur: It could grip it by the husk!
Soldier #1: It’s not a question of where he grips it! It’s a simple question of weight ratios! A five ounce bird could not carry a one pound coconut.
Arthur: Well, it doesn’t matter. Will you go and tell your master that Arthur from the Court of Camelot is here?
Soldier #1: Listen. In order to maintain air-speed velocity, a swallow needs to beat its wings forty-three times every second, right?
Arthur: Please!
Soldier #1: Am I right?
Arthur: I’m not interested!
Soldier #2: It could be carried by an African swallow!
Soldier #1: Oh, yeah, an African swallow maybe, but not a European swallow. That’s my point.
Soldier #2: Oh, yeah, I agree with that.
Arthur: Will you ask your master if he wants to join my court at Camelot?!
Soldier #1: But then of course a– African swallows are non-migratory.
Soldier #2: Oh, yeah…
Soldier #1: So, they couldn’t bring a coconut back anyway…
[clop clop clop]
Soldier #2: Wait a minute! Supposing two swallows carried it together?
Soldier #1: No, they’d have to have it on a line.
Soldier #2: Well, simple! They’d just use a strand of creeper!
Soldier #1: What, held under the dorsal guiding feathers?
Soldier #2: Well, why not?

America is being controlled by a cabal of its enemies.

This is a poor decision from a strategic standpoint but Germany and EU will be bearing the burden.

That’s bad enough but the Biden administration blocked the Keystone pipeline as one it’s first acts. And this announcement comes less than a week from the Colonial pipeline hack/ransom by…. a group of Russian hackers.

This is political stupidity of the highest order.

“This is a poor decision from a strategic standpoint but Germany and EU will be bearing the burden.”

Do you know from which country Germany bought most of its natural gas from the last 60 years? Hint: not the US…

Dude increasing German dependence upon imported gas from Russia or through pipelines controlled by Russia seems like a stupid strategic error.

Especially considering Russia has wielded interruptions to gas flow as a political/economic/diplomatic weapon in the past. Do you disagree?

Of course I do – because we buy Russian gas for over half a century now. And guess how we get the gas? Through a pipeline. So are you recommending we buy our gas from a country which teaches ‘critical race theory’ in school and is fond of ‘late term abortions’ instead?

Nope I made no such suggestion.

Other than urging an ally not to engage in the folly of undermining its economic and national security it has zero bearing on the US. My remarks about strategic stupidity were directed at the Germans and the Biden administration.

IMO, this episode amply demonstrates the futility of NATO post cold war. The Germans are voluntarily increasing their dependence on the rump of a Nation, Russia, whose threat was the reason for NATOs founding.

Clearly that threat no longer exists. No threat = no NATO which as we all know really means no US. So no large or permanent US troop presence or their payroll impact outside their kaserne.

Sounds to me like the demented pedophile is more than happy to suck Putin’s pipeline.

MR. BLINKEN: Two things, if I may, Senator. First of all, the president-elect strongly agrees with you that Nord Stream 2 is a bad idea and he has been very clear about that. I need to look at the actual legislation. I am determined to do whatever we can to prevent that completion, the last hundred yards, I very much agree.

So, Biden closes his eyes to a pipeline for the sake of maintaining a good relationship with Germany.

Yet he allows Michigan’s governor to order the closure an existing US-Canada pipeline, and Biden doesn’t so much as mention a word about it. Canada is rather upset; closure of the pipeline will threaten supplies to numerous refineries, and also affect the US:

“A Line 5 shutdown would cause a shortfall of 14.7 million US gallons of transportation fuel a day (that’s 45% of the current Enbridge supply in Michigan, Ohio, Pennsylvania, Ontario and Quebec) and a Michigan propane shortage of 756,000 US gallons a day (or 55% of the current supply).” (enbridge.com)

Who do you think is greasing the Biden Syndicate’s palms?

Trump was a Russian puppet even though he was pushing back against them, but it’s ok for Biden to “normalize relations” with them. What an about-face for the media.

Not a fan of Biden but this is the second smart thing he has done (1st was ordering complete withdrawal from Afghanistan, if he goes through with it).

Last year Russia leapfrogged Saudi Arabia to become the third-largest oil supplier to the U.S. last year, accounting for 6.85% of all U.S. imports. That amounted to an average of 538,000 barrels a day — or around 5% of Russia’s entire oil production. The increase of Russian oil imports is a result of the U.S. embargo of Venezuelan oil.

The fact that Russia is the third biggest supplier of crude oil to the United States exposes just how stupid the argument that Germany should not be doing business with Russia because the U.S. is “defending” Germany against Russia. The notion that Russia is a threat to Europe is stupid in itself. Russia and Europe are not only important trading partners they share great cultural traditions.