But it’s not just carjackings. Cities across the nation have seen an increase in juvenile crime since March 2020. 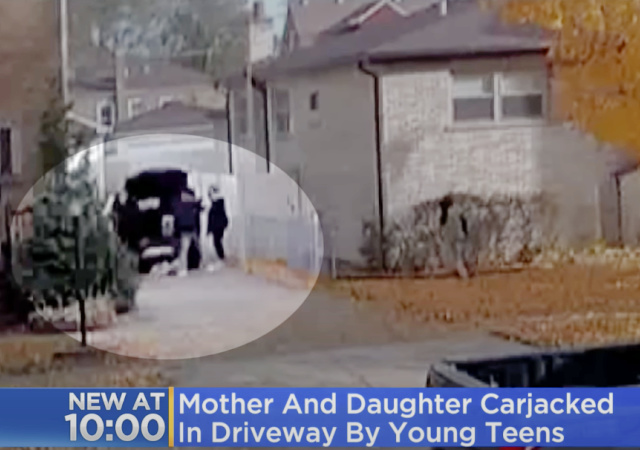 Chicago is one of the major cities that has seen an increase in carjackings. I wrote about Washington D.C. stats showing it has at least one carjacking a day.

The Chicago Police Department will expand its carjacking force along with “more cameras and license plate readers” in the city to combat the crime.

Lightfoot took it a step further, though. She blamed remote learning on the carjacking crisis:

“We are seeing an inordinate number of juveniles that are the perpetrators of these carjackings. I think in Chicago we have consistently seen 50% or higher of the people that we are arresting are juveniles,” Lightfoot told reporters.

“We started seeing this rise in cases in 2020. And I’ll be frank and say in Chicago there was a correlation we believe between remote learning and the rise in carjackings,” she added. “Having talked to state attorneys who are dealing with these cases in juvenile court and others, a lot of parents went to work during the day thinking their teenagers were logged on for remote learning, only to find something else. And I ask, ‘Is there some new market for stolen cars?’ And unfortunately the answer was no — that for many of these kids, some of whom had no prior involvement in the criminal justice system, this was pure boredom.”

The Chicago Teachers Union has been the one that kept children out of school most of the time since the spring of 2020. The union demanded Lightfoot apologize to Chicago students.

But is Lightfoot wrong? You see juvenile carjackings more in Democrat states, which have had strict COVID mandates concerning schools and children.

NPR’s article on February 21, 2021, concentrated on Chicago: “Chicago police say juveniles were involved in nearly half of the incidents last year, with the largest group a mix of juveniles and young adults between 15 and 20 years old.”

The article also mentioned Minneapolis’s rise in carjackings with suspects often “between the ages of 11 and 17.”

But it’s not just carjackings. This AP article, dated December 2020, expanded on juvenile crime in Connecticut:

Connecticut police chiefs on Friday expressed concern about a spike in juvenile crime they believe is related to the coronavirus pandemic, as teens spend more time away from school because of remote learning and canceled after-school activities.

Police are seeing an alarming increase in car thefts and robberies involving juveniles, as well as a troubling increase in shootings involving teens and young adults, the police chiefs of New Haven and Waterbury told Gov. Ned Lamont and other administration officials during a video conference discussion about law enforcement issues arising during the pandemic.

“We have an issue where a lot of our young folks are not in school,” New Haven Police Chief Otoniel Reyes said. “These are young folks that need that structure … that school provides them. Many of them are making bad decisions. … Every week we’re dealing with robberies and stolen vehicles. We’re dealing with juveniles that are committing robberies. And it’s very concerning.”

Milwaukee, WI: “Since the pandemic has hit and the violence has risen and other kinds of cases, they’re holding more youth in the detention center than ever before.”

She’s a moron. But then, she was put in place precicely because she is a moron. Same with Biden. Same with Harris. Same with Di Blasio. Same with Eric Garcetti. Same with every crazy DA being magically ‘elected’ with Soros money via ‘voting machines’.

The revolution is real.

And who is the chief Putter-in-Place guy?

The Soros machine. In Biden’s case, add the Communist Chinese machine in America.

Yep. An argument can be made that Soros is the principle reason for the rise in crime. He’s personally bankrolled most of these big city prosecutors and AGs who adopted these dangerous soft-on-crime policies. They wouldn’t be where they are with Soros money. His tentacles are in every major Democrat. He’s a real-life Bond villain.

If you think Chicago is anything but a Democrat Stronghold your an idiot.

Stop with the voting machines conspiracy theories, lies are not up to your standard, and lies designed to suppress Republican turnout are a bullet in Chuck Schumer’s gun for retaining the senate.

“The Revolution” is irresponsible rhetoric, nobody wants a civil war which today unlike the first time would kill a much larger portion of the population and wouldn’t leave civilians off the list of dead the way the first one did.

What we need to do is limit Biden by taking the senate and house from him and vote him out of office, not pretend we won in Chicago but voting machines gave it to the current major.

Sorry. I meant an uptick.

You”d better go back and brush up on the Revolutionary War.

Unless, of course, you meant the Civil War, in which case the names to remember are the two Williams – Quantrill and Sherman.

The Old South was well acquainted with civilian deaths the last year of the war and the three years afterward. Starvation is an ugly way to die.
.

Oh my days what is wrong with you, what is it with idiots like you and the anti-semitic George Soros trope!

Remote learning…..how to carjack I presume?

Are they bringing mock cars into the classroom to train?

Not the lack of enforcement. Are they teaching carjacking?

OK, this is progress…. she’s openly admitting that Dim policies are directly contributing to the surge in crime.

Now vote the dumb cunt out.

Please – there are grandmas present!

I mean you no insult JoAnne, but we are beyond that now.

As usual, it looks like the suspects are in The-Group-That-Can’t-Be-Named.

That’s why she had to blame remote learning and not white supremacy. There’s video.

Correlation is not causation, Beetlejuice. You know what else happened in 2020? BLM and Antifa riots, and “Defund the Police.”

That would have spiked the crime rate with or without the Sino Sniffle.

The people get what they vote for good and hard.

They are all wrong. It’s the parents’ fault.

All this time I thought it was “society”.

Yes, but the parents are exactly like the animals they’re turning out.

That is the problem exactly, no fathers. Bastards running amok.

The Philadelphia police department has recorded 120 carjackings this year through Jan. 26, almost 5 a day

Imagine if these people put those efforts into something lawful? Or in school?

But, but, they are needing their “equity”, whatever the fuck that means, Equality of opportuniny, yes. Equity of outcome can never happen without Marxism, and that is not happening here

It is what is is.

Suspect that wave of car jackings will subside when there a couple encounters that end with would-be car jackers bleeding out on the sidewalk. or driveway.

Then will come the wailing and rending of garments of the “parents” whose boy didn’ need to be shot. And the lawsuits. They’ll fail or get rendered a settlement of “go away” money, just like Trayvon Martin.

That will result in more “lottery” winners, with photo ops for Crump.

Is this idea of bored teens, not present in school running amuck worth a second look? Maybe, causation and correlation are different for sure. However, it doesn’t seem far fetched that when the schools, which largely serve a to warehouse them not teach them, are closed down and these teens lose what little structure their lives held that they would run wild.

If I had to guess I would bet that several factors are at play; single mothers unable to discipline teens due to physical inability (teen boys are bigger/stronger than adult women and might use that differential to alter or remove any power imbalance) or simple apathy. Add in few positive role models, particularly male apart from those found in their church or school; both of which have been unavailable to some degree for two years in Chicago. Then add in BLM protests and relaxed law emforcement or judicial consequences as the icing and taken together it makes sense.

First, this is Chicago. Hard core Leftist governed for multiple generations Chicago. There is no hope for it, or the people there. They are reaping what they have sowed for so long. The police have been taught that it is safer not to protect citizens from predators, and citizens have been taught that protecting yourself is going to be punished if you are caught. As the larger society breaks down, Chicago will maintain its lead in breaking down.

However, to the original claim by Lightfoot, blaming the remote learning programs for the rise in carjackings, I admit to a certain curiosity. Granting that while they are physically in a school building [just in it, no claim of learning] it is hard for a wanna-be carjacker to be out jacking cars. However, the statistic that might be of interest is what percentage of carjackers have ANY involvement with school at all? The dropout rate in Chicago, like any urban Leftist area, is pretty high.

And since Chicago’s teachers refuse to teach in school, if Lightfoot’s claim is correct should she not be opposing the Chicago teachers’ unions in the name of the safety of citizens?

The Chicago Teachers Union is a disgrace. Failing their students in a almost criminal way. Lightfoot should have fired every one of them who didn’t report to work in this last most recent tantrum. To hell with the kids “we gots to get paid.”

Every teachers union is a disgrace.

For anyone wanting some great examples of where correlation is not causation there is Tyler Vigen’s great website at tylervigen.com/spurious-correlations which as many many graphs of apparent correlations that are not directly cause and effect. I would suggest there is even less correlation than with Lightfoot’s claimed correlation of carjacking and remote learning.

She might as well just say “anyone but me” at this point.

I’ll give Lori Lightfoot this. She forced the teachers back into school. She got it done.

Meanwhile NY mayor Eric Adams, criticizing Lightfoot and saying he has more “emotional intelligence”, gave in to the teachers. F Adams, he isn’t paid to have emotional intelligence and keep the government workers happy, but to run the government for the benefit of the residents of NY. I’d say the US citizens in NY, but I know that’s not the agenda.

Adams is all hustle, and little intellectual depth. Still, it doesn’t take a high IQ to be a good leader. But this guy is seriously mediocre, and many of his beliefs are rather dumb.

But why did she have to force the teachers to return to work? Is it right for CTU to unilaterally decide to stay home? CTU abused their monopolistic stranglehold on their public to extort another couple of days off and yes I believe that was with pay. I believe that CTU is a major reason for the south side black working people fleeing to south suburbs and further.

Yes I’ll postulate that CTU sucks. But the job of a mayor is to make the city work even with its dysfunctional parts. It’s not the job of the city to be perfect for the mayor.

The solution? Carry a gun and learn how to use it.