In Europe, Freedom Convoys head to Paris and Brussels. 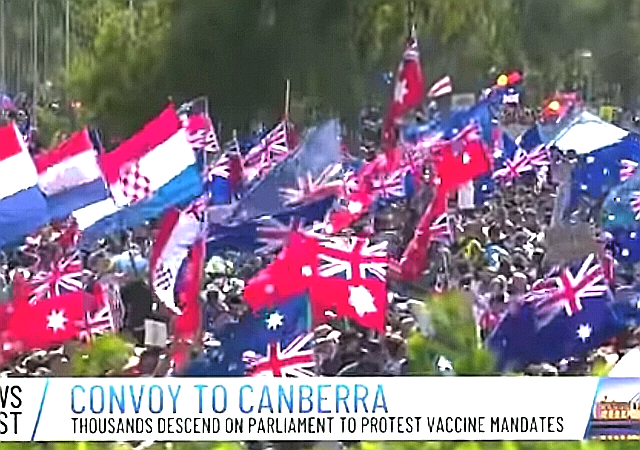 A Freedom Convoy also got underway in New Zealand’s capital Wellington, where hundreds of motorists took part in the protests inspired by the Canadian movement, and demonstrators camped outside the country’s parliament demanding an end to the coronavirus restrictions.

Although they have been in Canberra for nearly two weeks, today’s rally grew to an extraordinary size with the lawn outside Parliament House filling to hold tens of thousands.

Trucks – adorned with banners, messages, and flags – meandered slowly through the pedestrians. Their playful horns had to compete with cheers and wolf-whistles from a crowd in high spirits.

And there it is – the heart of the issue. People have joined the Canberra Freedom Convoy because they have lost more than they can tolerate. It is not a piece of clever political incitement, or some kind of alt-right witchcraft.

Organic movements like this rise for the same reason Australian politics is awash with minor parties – Labor and Liberal have lost touch.

Quiet Australians not so 'quiet' anymore…pic.twitter.com/VdPvo6btvV

New Zealand’s capital Wellington witnessed similar protests. “The protest, which began on Tuesday and was designed to replicate the “Freedom Convoy” action by Canadian truckers, attracted demonstrators from all corners of [New Zealand],” Australian public broadcaster ABC reported Thursday. “Hundreds of vehicles plastered with messages such as “give us back our freedom” were parked in streets surrounding parliament,” the news outlet added.

Police in New Zealand’s capital made more than 100 arrests as they moved to clear a protest camp outside the country’s parliament where thousands had gathered to rally against Covid-19 restrictions.

Inspired by “freedom convoy” protests by truckers that have paralyzed the Canadian capital, Ottawa, since late January, demonstrators in Wellington have pitched tents and parked vehicles to block major roads surrounding the legislature since Tuesday.

The New Zealand protests are the latest sign of the truckers’ growing influence beyond Canada’s borders, as others mimic their strategies to oppose coronavirus laws in their own countries.

The spark of rebellion ignited by the Canadian truckers has crossed over to the other side of the Atlantic, as freedom convoys head to French capital Paris and the European Union’s de facto capital Brussels.

Belgian authorities have banned the pan-European Freedom Convoy from entering Brussels, which houses the EU parliament and the bloc’s other key offices. “Brussels authorities have banned a pan-European ‘freedom convoy’ of motorists protesting COVID-19 restrictions from entering the Belgian capital,” French TV network Euronews reported Friday. “Protesters set out from southern France on Wednesday in what they called a ‘freedom convoy’ that will converge on Paris and Brussels to demand an end to COVID-19 restrictions, inspired by demonstrators who have gridlocked the Canadian capital Ottawa.”

France, where President Emmanuel Macron’s COVID restrictions and mandates have triggered popular protests, has become the epicenter of a Canadian-style Freedom Convoy movement in Europe—as thousands of French motorists make their way to Paris.

The French government has responded with force against the emerging popular movement. “Police fired tear gas at demonstrators on the Champs-Élysées avenue in Paris on Saturday shortly after a “Freedom Convoy” protesting against Covid-19 restrictions made it into the French capital,” public broadcaster France24 reported.

It seems to be in more places than that. The Globalists are buying futures in Adult diapers.

Or, ammunition. I’m wondering when the first crowd will be gunned down, and where?

I can offer recommendations 🙁

The ruling class is evil. Nothing short of going full Ceausescu will do.

That is the very response that is needed, and why the 2nd amendment is under attack.

Tumbrels will need to turn soon.

And still no convoy seen in the Home of the Brave.

I know, beyond sad..
They keep
The Jan 6 protesters locked up to
Remind us. We are all spineless letting them rot

Perhaps the USA is the #1 target and the plan was to isolate us by crushing those around us who were to just surrender per the plan. They were even told to surrender!. Perhaps are action needs to be support for our friends on the front line. I do not know why it appears the USA is not on point, however. There may be communications going on that we do not know so there may be more coordination that we see.

I think it would have happened already,

It could be that the people who care most about liberty are living in free states that have lifted restrictions, but the people living in slave states are too busy saying, “Mandate me harder, Daddy,” to want to protest for freedom.

The Canadians are doing it right. Inspiring everyone.

Not very many police in any of the countries, including the USA, have shown much reason for respect. Defund the police might just become the rallying cry soon.
RCMP were acting like terrorists when they sabotaged three excavators. They admitted they did it. Prison should be in the future of the ones who did the damage and anyone who gave orders to commit the crime.

The police are not, and never have been, your friend. Period.