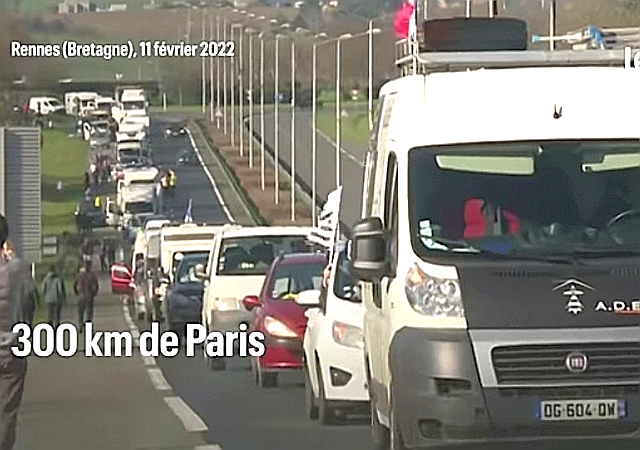 Inspired by Canada’s Freedom Convoy, thousands of motorists from across France are converging on Paris to demonstrate against government’s coronavirus restrictions. Up to 2000 vehicles could be part of the convoy that intents to defy the police ban and enter the capital, French newspaper Le Monde reported on Friday.

The French police have banned the convoy from entering the city, news reports say. The Paris-bound convoy is expected to face tough police response. Some 7,200 police officers will be on duty in Paris to enforce the ban, French media reported.

“Thousands of opponents of the [COVID] vaccine pass, who came in convoys from all over France, camped on Saturday morning at the gates of Paris where they intend to enter in order to demonstrate despite the ban placed by the police headquarters,” French newspaper Le Figaro reported.

The French Freedom Convey has galvanized support from across the country. The “opponents of the government set off from Bayonne, Perpignan, Lyon, Lille and Strasbourg aimed at converging on the capital,” Le Figaro noted.

The media footage shows people waving French, Canadian and U.S. flags, and cheering the passing convoy with the chants of “liberté.”

The state-owned TV network France 24 reported the government’s response to the Freedom Convoy:

France mobilised thousands of police, armoured personnel carriers and water cannon trucks in Paris on Friday to keep out convoys of motorists converging on the capital for a protest against COVID-19 restrictions.

Checkpoints were set up at toll points on major entry roads while riot-control barriers were erected across the city centre ahead of rallies that the protesters aim to hold over the weekend.

Inspired by horn-blaring “Freedom Convoy” demonstrations in Canada, the motorists – from numerous cities across France – were expected to gather outside Paris during Friday and seek to defy a police order not to enter the city. (…)

As the evening rush hour got under way, police began checking drivers’ documents at various entry points into the city centre. More than 7,000 officers will be mobilised over the next 72 hours.

Convoy members exchanged information via social media on how best to slip into the city, avoiding a police presence that included heavy-lifting equipment to dismantle any makeshift roadblocks.

The movement has also spilled over to neighboring Belgium, where the government has banned the Freedom Convoy from entering Brussels, the city which serves as the capital of the country and that of the European Union.

The convoy reaches Paris as France is heading towards a presidential election in two months time. President Emmanuel Macron, who is running for a second, faces tough challenge from the right.

According to the latest poll numbers published by Politico, President Macron is polling at 25 percent, following by right-wing candidates Marine Le Pen and Éric Zemmour, who are at 17 ad 14 percent respectively.

[Excerpts from French news reports translated by the author]

Governments around the world:
“We are not tyrants- you are free to voice your opinion”

Government: “your protest is illegal. Again, we are not tyrants”

Workers of the world unite! Oh not those workers…./S

Sounds like French citizens are not allowed to come to their capitol and address their government. At least not ‘these’ citizens.

That was a good movie.

“The Truckers are coming to save us”

That picture literally brings tears to my eyes each time I see it
Can’t find it right now
But when I do see it, I will save it
I might have a sign company make a huge sign of it

If conservatives had bothered to assemble a spray-paint brigade, the proper counter to this would be obvious.

How did we go from 2 weeks to flatten the curve to this?

I wonder if Macron knows the story about King Louis XVI …. any guillotines left over in the basement?

Make it slow and painful. Given one of those radiation cocktails. See the old movie DOA for reference.

Good on ’em although, really? Does a Ford Transit van carry the same oomph as a Mack or Freightliner tandem drive tractor bearing down on your insignificant self?

I don’t know if I’m using the current jargon. Tractor with two rear axles, you dont have to cha chain in snow country.