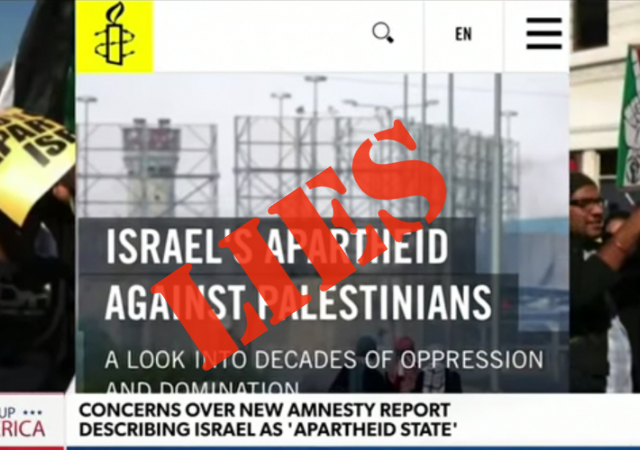 Amnesty International has published a biased report falsely accusing Israel, the only functioning democracy in the Middle East, of being an “apartheid” state.

Amnesty, an organization with a history of anti-Israel activism, released a 300-page report on February 1, labeling the Jewish State as a “regime of oppression and domination of the Palestinian population for the benefit of Jewish Israelis.”

The Jerusalem-based watchdog NGO Monitor, one of the first to review the Amnesty report, concluded that the group is weaponizing the “publication to call on the international community to adopt and implement anti-Israel BDS and lawfare.”

On Monday, the NGO Monitor published a detailed review exposing the flaws and inaccuracies in Amnesty’s report (read the full review here):

The publication breaks no new ground and is not meaningfully different from the discredited Human Rights Watch (HRW) and B’Tselem reports from 2021 – yet Amnesty says they took over four years to produce it.

Like many previous NGO publications, Amnesty’s report manipulates and distorts international law, Israeli policy, and events on the ground, as well as denies the Jewish people their right to sovereign equality and self-determination.

Thus, Amnesty’s report can be considered antisemitic according to the IHRA definition of antisemitism, which notes that: “Denying the Jewish people their right to self-determination, e.g., by claiming that the existence of a State of Israel is a racist endeavor.”

Likewise, Amnesty’s report criminalizes Israeli laws and practices designed to safeguard Jewish identity – such as the Law of Return – which are enshrined under international law and parallel the practices of many nation-states.

In these attacks, Israeli policies are artificially framed as attempts to preserve “Jewish domination” – an antisemitic trope and refrain throughout the publication. Amnesty’s overarching argument is that everything Israel does is nefarious, whether it promotes peace or Palestinian self-detemination, improves the lives of Palestinians or minority groups in Israel, or if mandated by international law.

The Israeli government blasted the so-called human rights group for compiling a report littered with terrorist propaganda and antisemitic lies to smear a democracy governed by the rule of law (surrounded by belligerent rogue regimes and military dictatorships). “The report consolidates and recycles lies, inconsistencies, and unfounded assertions that originate from well-known anti-Israeli hate organizations, all with the aim of reselling damaged goods in new packaging,” the Israeli government said in a statement. “Repeating the same lies of hate organizations over and over does not make the lies reality, but rather makes Amnesty illegitimate.”

“Amnesty is not a human rights organization, but just another radical organization that echoes propaganda with no serious examination,” Israeli Foreign Minister Yair Lapid said, responding to the report. “Five minutes of serious factchecking were enough to know that the facts that appeared in the report published this week were a delusion divorced from reality,” he added.

We vehemently reject the biased and one-sided report on Israel scheduled to be released February 1 by Amnesty International-UK that presents an unbalanced, inaccurate, and incomplete review and instead inexplicably focuses on one aim: to demonize and delegitimize the Jewish and democratic State of Israel.

This libelous document resorts to baseless ‘apartheid’ accusations against Israel, among other distortions. In so doing, the report commits a double injustice: It fuels those antisemites around the world who seek to undermine the only Jewish country on earth, while simultaneously cheapening and downplaying the horrific suffering that was a result of apartheid in South Africa. The apartheid system practiced by South Africa was characterized by tyranny, segregation and dehumanization established both in law and practice; this has no equivalence to a vibrant democracy where all citizens have rights and representation in the national legislature.

We have reviewed Amnesty International UK’s upcoming report on Israel and strongly condemn it as an effort to demonize Israel and undermine its legitimacy as a Jewish and democratic state. In an environment of rising anti-Jewish hate, this type of report is not only inaccurate but also irresponsible and likely will lead to intensified antisemitism around the world.

This new report goes beyond criticizing Israeli policies and actions to painting Israel’s very creation as illegitimate, immoral, and faulted. Amnesty International’s allegations that Israel’s crimes go back to the sin of its creation in 1948, serve to present the Jewish and democratic state as singularly illegitimate at its foundational roots. Such a hateful characterization not only delegitimizes the Israeli state enterprise and the Jewish right to self-determination in its historic homeland, but also undermines the vision of a mutually negotiated solution to the Israeli-Palestinian conflict that will provide security, dignity, and self-determination to both peoples.

Several noted Arab-Israelis slammed the report, which bears no resemblance to the reality on the ground.

How dare you claim that I, an Arab-Israeli who served along with Jewish soldiers in the IDF and managed hundreds of Jewish employees, live under an apartheid regime? How can you say Samer Haj-Yehia lives in an apartheid regime when he is the head of the biggest bank in Israel?

Jerusalem-based Arab-Israeli rights activist, Bassem Eid, was among those who criticized Amnesty for the report. In his latest blog post published in the Times of Israel, he called Israel “the best place to be an Arab.” Eid noted that “Israel’s Arabs have been integrating into society and live in every corner of the country. Israel’s Arabs enjoy the same freedoms as their Jewish neighbors.”

Landmark? You’re a little late to the party. Groups like @hrw have been trying to make this same claim for years. But the world saw through the lies! Now countries in the Middle East are making #peace with Israel. https://t.co/bFkWEM1XX2

Mohammad Kabiya, a prominent pro-Israel activist and a reservist in the Israeli Air Force, responded to the report:

Racist @amnesty in their fake report are calling me, a proud Israeli-Arab and Israeli-Muslim, “a Palestinian living in Israel”.

How dare you define my identity for me? #SHAMnesty https://t.co/lH9nXJLTvQ

Arab and other monitories have been a significant beneficiary of the laws and institutions established by the Jewish state. Fourteen Arab and Druze have been elected as Knesset lawmakers in the current Israeli parliament. Many Arabs have served with distinction in civil service, judiciary, and military. Israeli Arab women, too, have distinguished themselves in various fields: acting as Knesset members, educators, soldiers, and diplomats. “Among Israeli Arab studying for their bachelor’s degree, women account for 72% of the total,” the Israeli newspaper Haaretz noted in June 2017.

The data released by Israel’s Central Bureau of Statistics (CBS) in December 2021 showed that the Arab Christian women were the best educated female demographic group in the Jewish State. “The proportion of women among the Christian students was higher than the women’s proportion among the total number of students in all degrees and particularly in advanced degrees: 64.1% and 53.2%, respectively, of those studying for a PhD, and 72.9% and 63.8%, respectively, of those studying for a master’s degree,” the report found.

I appreciate the quick and thorough rebuke of Amnesty’s lies and propaganda. But this cycle of attack and reaction leaves Israel and Jews always on the defensive. Perhaps an additional activity should be to go on then offensive and start attacking the very concept of “Palestine” whenever there this conflict is in the news. So long as the lie of “Palestine” is allowed to stand unopposed and so long as Jews/Israel accept the position of merely responding to political attacks, the cycle will just keep repeating.

The only long-term solution to this problem, is expulsion of these people. Since they advocated driving Jews into the sea, it would be reasonable to do the same for them.

I share your sentiment, but I think a more realistic solution would be for the Arab countries where these people are from or descend from to take them back instead of leaving them to be a human rights weapon against Israel. Most Arab countries have loads of empty space and if any government needs to be held accountable for the treatment of the “Palestinians”, it’s the Arabs, not Israel.

Thank you, Vijeta, for this column and for your continuing and tireless efforts.

Thank you for these kind words! It’s a privilege to write for LI readers.

To be clear, I love your work on this topic also. My comment was directed more in general to the organizations that you cited in your post. It’s necessary and worthwhile to debunk the lies being told. I just want an additional strategy that puts the Israel haters on the defensive instead of us.

I totally agree. We are doing some of that proactive work with our Indians4Israel initiative. This battle against lies and misinformation has to be fought on many fronts.

It’s a little late for the ADL who annihilated their credibility for eternity when they chose to consort with the malignant antisemitic demagogue and hatemonger Al Sharpton.

The Dhimmi-crats’ and useful- idiot, European dhimmi-Leftists’ attempts to paint Israeli Jews as alleged “colonial” “occupiers,” given the inconvenient (for them) historical and factual reality that Jews were living in the middle east for millennia before the supremacist, totalitarian, belligerent and hate-filled ideology of “Submission” was conceived; millennia before such a thing as a “Muslim” ever existed; represent more than the slavish parroting and promotion of ignorant and dishonest Muslim supremacist propaganda — it represents a manifestly evil narrative that seeks to erase Jews’ historical ties to the middle east and to de-legitimize the foundation of the state of Israel in Jews’ ancestral homeland.

Reminds me of Whoopi Goldberg.

No, it’s a whole different thing. Goldberg isn’t very bright, and she sometimes expresses herself inartfully, but she’s no antisemite. Amnesty is.

How exactly is she “objectively antisemitic” (to borrow Orwell’s term)? What has she ever said or done which would put her in such a category? She’s thick, but as far as I know she’s always been rather philosemitic.

“White people killing white people should be of no concern to blacks” is the most racist term I have heard.

Read “Catch the Jew” by Tuvia Tannenbaum. He nails the mentality of these NGOs.

Amnesty International used to be a valuable partner in the struggle against communism. For all its flaws, such as its condemnation of capital punishment in the USA, it didn’t pretend that rose to anywhere the level of the Soviet and Chicom crimes.

It lost its way after the USSR collapsed in 1991, and by2001 it had completely turned to the dark side. Whatever residual respect I had for it was destroyed when it compared Guantanamo Bay to the Gulag, and tried to persuade actual Gulag survivors to endorse that comparison.

This is a grossly anti Semitic report