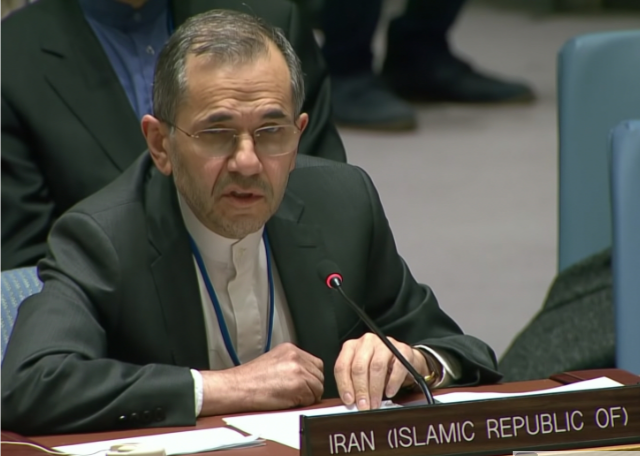 The United Nations Economic and Social Council (ECOSOC) has singled out Israel for allegedly violating women’s rights. The multinational body, which looks after UN’s economic and social work, voted 43 to 3  in support of a resolution condemning Israel, the only democracy in the Middle East, for violating women’s rights, the Geneva-based watchdog group UN Watch reported on Friday. None of the other 192 member states of the UN were rebuked for its treatment of women.

The absurdity doesn’t end just their. Among those who sat in judgement over the Jewish State included China, Iran, Pakistan, Russia, Syria, and Saudi Arabia. The 54-nation UN body comprises of several failed states and dictatorships in Africa and the Middle East.

The UN resolution, passed on Monday, falsely blames Israel for the condition of the Palestinian women, the majority of whom live in Hamas-ruled Gaza or in the PLO-controlled Palestinian Territories. Arab women living in Israel enjoy equal rights with men in politics, economics, and the cultural sphere.

Israeli Arab women have distinguished themselves in various fields: serving as Knesset lawmakers, professors, soldiers, and diplomats. “Among Israeli Arab studying for their bachelor’s degree, women account for 72% of the total,” the Israeli newspaper Haaretz reported in June 2017.

The Islamic Republic of Iran, Saudi Arabia, Pakistan and Belarus were among members of the UN’s 54-nation Economic and Social Council, a principal organ of the world body, who voted on September 14th to single out Israel as the only country in the world to be rebuked by the council this year for allegedly violating women’s rights.

In a resolution adopted 43 to 3, with 8 abstentions (see breakdown below), the Jewish state was accused of being a “major obstacle” for Palestinian women “with regard to the fulfillment of their rights, and their advancement, self-reliance and integration in the development of their society.” (…)

The resolution in its preamble made global references to “violence against women and girls in all its different forms and manifestations worldwide” and to the need to “eliminate all forms of violence against women” in “all regions of the world,” however Israel was the only country held up for criticism.

Cuba, Syria, North Korea and Venezuela were among the countries who sponsored the resolution via the Group of 77, a bloc today made up of 134 states, and this year represented by Guyana. (…)

The resolution turns a blind eye to how Palestinian women’s rights are impacted by their own governing authorities — the Palestinian Authority in the West Bank, and Hamas in Gaza. Nor does it make any criticism or any reference at all as to how women and girls are discriminated against within patriarchal Palestinian society. On the contrary, the resolution praises what it calls “Palestinian initiatives at the legislative, administrative and security levels to advance women’s rights.”

Shame on France, Spain, Norway for joining the jackals. https://t.co/IJtmzUfnI6

The United States, Canada, and Australia were the only countries to vote against the motion. France, Ireland, and Japan voted against Israel, while Germany, the Netherlands, and Switzerland abstained.

India, which often portrays itself as Israel’s close ally, joined its arch-rivals China and Pakistan in preposterously condemning Israel’s record on women’s rights. In siding with Communist China and Islamist Pakistan at the UN forum, India’s Hindu Nationalist government has displayed appalling judgement to say the least. Since I closely follow Israel-India relations, I have often pointed out New Delhi’s anti-Israel record at the UN despite its diplomatic overtures to Jerusalem.

If the farcical U.N. possessed a scintilla of integrity and moral probity, this rebuke would have properly been aimed at the supremacist and totalitarian ideology of “Submission,” the most pervasive and destructive misogynist force, on Earth.

But, dhimmitude reigns supreme at the U.N., as it does in the Dhimmi-crat Party. This means alternately ignoring, whitewashing, rationalizing and enabling the sundry intrinsic pathologies of Submission.

And, how disappointing is it to see Japan, France and Ireland, joining this stupidity?

I’ve observed some pervasive anti-Israel and pro-jihadist venom emanating from Ireland, over the years. I suspect that these gullible Irish dhimmi fools still possess a soft spot for the PLO/Fatah/Hamas, because they’ve stupidly swallowed the fallacious and slanderous narrative that Israel is an alleged “colonial” project, thus tying that narrative to long-running Irish aspirations to unify Northern Ireland. Quite stupid, really, equating the two scenarios, but, I can’t account for any other rationale for why the generally-common sense Irish would support jihadist thugs.

One of the dumbest comments ever posted on these boards.

As a former Catholic with real issues with the church, I’m not willing to jump to any conclusions about the The Friendly Grizzly.

Hell, I’ve run across more than my share of bears. Go to your nearest town dump if you want to see bears.

But other than the Griz who contested ownership of the deer carcass which belonged to the formerly live deer I just killed, all my relations with bears have been friendly. Hell, my relations with bears have been friendly even with bears who disputed ownership over the carcass. The law in Alaska states (like Texas which may be why we get along so well) you can use deadly force to protect your property.

But the deer you just killed isn’t your property. Kill another one and let the bear have it.

There is a point! There is always a point, if you live long enough. Father Driscoll of the sainted Chevy Blazer and the German Shepherd dog “Bear” didn’t waste his life. Monsignor Tillman who captured 11 NORKs at the point of his .45 didn’t raise no shirkers.

The point is thank you.

And, India, as well. What the hell? After Israel-India military and economic ties are closer than ever. Makes no sense.

We could all live with this obvious national character assassination by the UN gangsta click against Israel alone except for the fact that these wannabe important diplomats get paid well, have free parking and a ton of other perqs and prerogs unavialable to any ordinary, taxpaying New Yorker or American citizen, including and especially diplomatic immunity.

Seriously, who gives a sh*t what these patently idiotic frauds and lackeys have to say?

Anyway, this is what depraved envy and the need for attention and undeserved respect looks like. They have to command it via a puffed up, stilted, and remarkably inauthentic council belonging to a worn out and irrelevant “world body,” claiming a true “sense of the ‘community of nations'”.

We know an ersatz issue when we hear one, and we’re hearing one, for sure.

notamemberofanyorganizedpolicital in reply to GatorGuy. | September 19, 2020 at 2:59 pm

Plus they ALL vote Democrat!

Islamic victims of female genital mutilation were unavailable for comment. Or maybe they just couldn’t be heard through the burlap sack they’re forced to wear over their heads.

The UN should just fuck all the way off.

The UN has become irrelevant

Defund the U.N. and ship them all to North Korea F.O.B. Shipping Point.

Ironically one of the UN Ambassadors is Peng Liyuan, a Chinese contemporary folk singer and performing artist – and Xi Jinping’s wife…

Maybe one day, having been granted political asylum and thus disenthralled from her current official ambassadorial and even marital obligations, she’ll write a song for all the world and call it “Submission”.

Always nice to see the Iranian tinhorn calling out other for rights violation.

How could the fact the Ireland joined the jackals be in the least surprising or even disappointing? They have been exceedingly anti-Israel for decades. Eff the Irish.

When you read CRAP like this, you have to ask why the hell does the U.N. continue to exist. As it is, located on U.S.A. soil, the legal residing diplomats get the benefit and entitlement to freedoms and a style of life which most would never experience in their home county. And yet with not a bit of respect for the significance of these rights they cast votes along a “political opposition line”. The hypocrisy of it is not missed and as a result respect for them is also dismissed.

I’m sure that North Korea, or Iran, or Nigeria, or (other 3rd world hell hole) could use the financial transfusion that hosting the UN would gain them. Just think of the financial opportunities for local private security companies.

Israeli Arab woman declarer:
I can go to a restaurant in Tel Aviv
I can get a job in an Israeli company
I ca go to an Israeli collage
I can be a doctor
I can open a business in Israel
I can be a teacher in a Jewish school
I can be a reality show on TV
I can run for office

BECOUSE I AM AN ARAB WOMAN WHO LIVES IN
ISRAEL