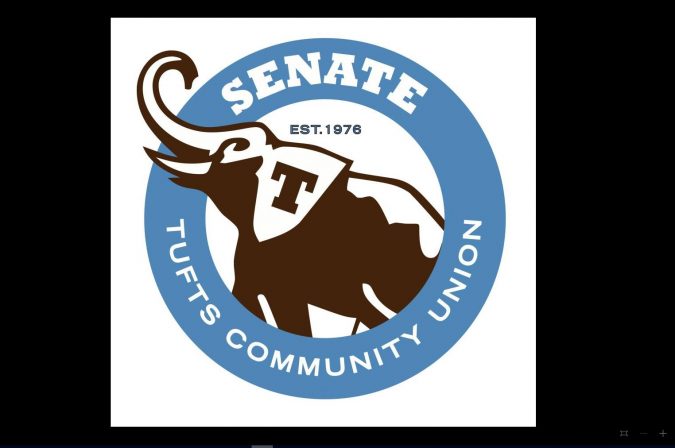 I have seen this movie before.

In early April 2014, anti-Israel students at Cornell University, led by Students for Justice in Palestine, brought a last minute resolution before the student assembly to divest from certain companies doing business with Israel. The resolution was managed in such a way as to provide the bare minimum notice and, most important, just before the Jewish Holiday of Passover, when many Jewish students travel home.

These student divestment resolutions have no power, because student governments do not control university investments. Rather, these are symbolic resolutions meant to demonize Israel.

… Cornell Students for Justice in Palestine has launched a last minute, sneak Divestment Resolution which is to come up for initial discussion on less than 48 hours notice this Thursday afternoon, April 10, at 4:30 p.m….

Passover starts Monday night, April 14, and many Jewish students at Cornell leave on Thursday to head home for the holidays.

If the Resolution is not tabled on Thursday, the Resolution will come to a formal vote on the following Thursday, April 17, in the middle of Passover, just a day after Jewish students return to campus after Passover Seders.

By so scheduling the Resolution, SJP and its supporters in the Student Assembly have sought to put Jewish students and campus groups at a disadvantage, literally forcing them to choose between celebrating the Jewish People’s Exodus from slavery in Egypt or organizing to fight the Divestment Resolution.

As discussed below, the intention to bring the Resolution to the Student Assembly was not made in regular order, was concealed from Jewish and pro-Israel groups on campus even though it has been in the works for weeks.

The scheduling of such resolutions with a timing around Jewish holiday appears to have become a more common tactic, as reported last December at Algeimeiner.

And it just happened again, this time at Tufts University in Massachusetts. The resolution was brought by SJP, and is strongly supported by the student chapter of Jewish Voice for Peace (see our post earlier today about how JVP has attempted to hijack Passover and turn it into an anti-Israel holiday).

The Tufts student Senate announced the resolution just days ago: 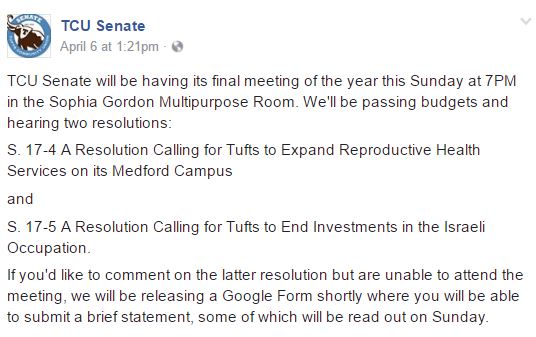 The resolution is here. Here are the operative paragraphs:

BE IT RESOLVED that the Tufts Community Union (TCU) Senate urges Tufts University to divest from and not invest in Elbit Systems, G4S, Northrop Grumman, and Hewlett Packard Enterprises;

BE IT FURTHER RESOLVED that the TCU Senate urges Tufts University to enact a socially responsible investment policy for the university endowment that follows guidelines on ethical investments that uphold human rights for all;

BE IT FURTHER RESOLVED that the TCU Senate urges Tufts University to implement a human rights screen on our endowment investments that would identify companies involved in human rights violations, which must include the human rights violations against Palestinians, non-US-citizens in detainment and deportation proceedings, and incarcerated individuals, and which will lead to Tufts ending investment in Elbit Systems, G4S, Hewlett Packard Enterprise, and Northrop Grumman;

BE IT FURTHER RESOLVED that the TCU Senate urges Tufts University to acknowledge its responsibility as an educational institution which places great importance on civic engagement to promote the understanding of present day human rights abuses, occupations, and the institution’s role in upholding them;

BE IT FURTHER RESOLVED that Tufts should not financially support corporations that profit off the occupation of Palestine and the continued spread of settlements declared illegal under international law.

It’s important to note how the Israel issue is tied to other unrelated issues. This “intersectionality” approach is common, with anti-Israel activists hoping that sympathy on other issues will carry over.

This was very much a sneak attack by SJP, as Algemeiner reports, Jewish Community at Tufts University ‘Deeply Disturbed’ by Surprise BDS Resolution Brought for Vote Days Before Passover:

Jewish student leaders at Tufts University “are working intensely” to combat a surprise boycott, divestment and sanctions (BDS) resolution initiated by an anti-Israel group for a vote days before Passover, the campus chaplain told The Algemeiner on Friday.

“Yesterday, without any forewarning, Students for Justice in Palestine (SJP) put forward this resolution, to be voted on by the [Tufts Community Union (TCU)] student senate this Sunday night,” said the campus Hillel’s executive director, Rabbi Jeffrey Summit, who also serves as a research professor in the department of music and the Judaic studies program.

“The Hillel Jewish community is deeply disturbed by this vote, and by the way the resolution was brought so close to Pesach, at a time when many of our students are home with their families, readying themselves for the holiday,” Summit said.

The SJP students could not even answer if Tufts invests in the four companies at issue.

The argument on the resolution is ongoing now. We’ll report on the results when known.

UPDATE: The Resolution passed. The vote was 17 for, 6 against, and 8 abstentions. The Senators refused to allow their names to be used, and based on the audio, the names of those voting a particular way were not recorded. So the Senators cannot be held accountable for their actions. There was also strict enforcement of a no-video and no identification of speakers policy. As if debating the Resolution when large numbers of Jewish students had already left campus for Passover was not bad enough, it was done in a secretive manner.

It was obvious that the pro-divestment side was very well prepared with their social justice arguments. The opposing side, which only received notice of the Resolution a few days ago and was weakened by the Passover Eve scheduling, never mounted a serious challenge to the underlying premise of the Resolution, which is that Israel is responsible for the conflict. There was little to no discussion of the history of Palestinian terrorism, the suicide bombing campaigns, and rejectionism. In contrast to other campuses where the anti-BDS side has successfully opposed divestment resolutions by educating student government as to the facts, the sneak nature of the attack and timing worked to the pro-BDS students’ advantage.

You can listen to the 3+ hour audio here.

It really is disturbing not so much because anti-Israel views were expressed. There weren’t many specifically anti-Israel views expressed at all. Rather, it was all about “social justice” and “intersectionality.” The students supporting the resolution were like mind-numbed “social justice” warriors — they repeated the argument over and over and over that the student Senate needed to pass the resolution for social justice and to fight systems of oppression of which the “occupation” was just one part. They repeatedly made reference to the “Mexico border wall” and the NODAPL Indian pipeline protest. Supporting this resolution against Israel was part of opposing those other issues. You are seeing the fruit of a generation of indoctrination of students in “intersectionality” theory, which of course is primarily used against the Jews.

Do you suppose there are any members of the Students for Justice in Palestine who actually believe the organization is really interested in justice for anyone in that beleaguered area?

What is justice for Palestine? Oh, forgot. Genocide. Oh well.

There can’t be justice for palestine, since palestine doesn’t actually exist except in the fevered dreams of anti-israel pot bellied savages.