The statue was erected to ‘honor’ Soleimani, the top Iranian terror operative killed in a drone strike ordered by President Trump. 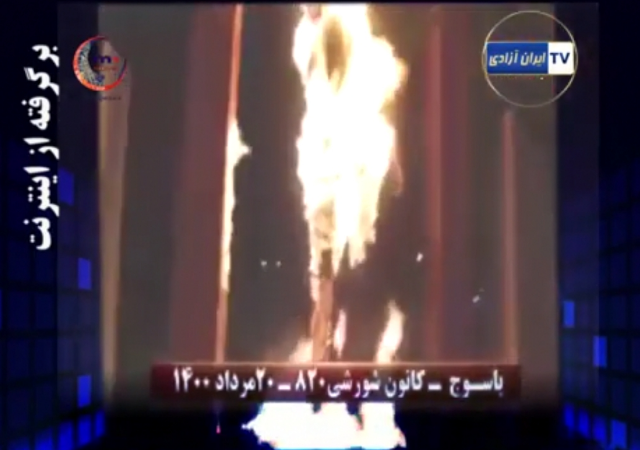 A statue of the Iranian terror mastermind Qassem Soleimani was set on fire by unidentified locals just hours after it was unveiled in southwestern Iran, the regime-run media reports confirmed.

The statue was erected to mark the second death anniversary of Soleimani, the head the Islamic Revolutionary Guard Corps (IRGC)-Al Quds Force, who was killed in a U.S. drone strike in Baghdad ordered by President Donald Trump.

“The statue of Soleimani had just been unveiled on Wednesday morning. The six-meter tall statue was worth about 150 million Tomans or about $35,500,” The Jerusalem Post reported quoting the Iranian state media.

A leading local Mullah compared the incident to the 202o drone strike that killed the top Iranian terror operative. “This treacherous crime was carried out in darkness, just like the other crime committed at night at Baghdad airport,” when Soleimani was killed, senior Muslim cleric Mohammad Ali Nekounam said in a statement carried by ISNA,” the Voice of America reported.

A statue erected to honor slain Iranian commander Qassem Soleimani has been torched by unknown assailants hours after it was unveiled, Iranian media reported Thursday.

Soleimani, who headed the Quds Force, the foreign operations arm of Iran’s Revolutionary Guards, was killed on January 3, 2020 in Iraq in a United States drone strike at Baghdad airport along with his Iraqi lieutenant and others.

On Wednesday morning, a statue to honor him was unveiled in the southwestern Iranian city of Shahrekord.

But in the evening it was set on fire, ISNA news agency said, calling it a “shameful act by unknown individuals.”

“This treacherous crime was carried out in darkness, just like the other crime committed at night at Baghdad airport,” when Soleimani was killed, senior Muslim cleric Mohammad Ali Nekounam said in a statement carried by ISNA.

Both the IRGC and its foreign arm, Al Quds Force, are U.S.-designated terrorist organizations. According to the Pentagon, Soleimani was directly responsible for killing hundreds of U.S. military personnel in Iraq and was plotting an imminent attack on American diplomats and troops when President Trump ordered the strike. “Soleimani was plotting imminent and sinister attacks on American diplomats and military personnel, but we caught him in the act and terminated him,” President Trump disclosed following the strike.

The Iranian regime marked Soleimani’s second death anniversary by threatening to take ‘revenge’ if former U.S. President Trump and ex-Secretary of State Mike Pompeo are not put in trial in accordance with the Islamic Law. “If Trump and Pompeo are not tried in a fair court for the criminal act of assassinating General Soleimani, Muslims will take our martyr’s revenge,” Iranian President Ebrahim Raisi declared on Monday.

The anniversary was also marked with a wave of anti-American demonstrations organized by the Iranian regime and its proxies across the Middle East. “Chanting ‘Death to America,’ the marchers filled a Baghdad square to honour Iran’s General Qassem Soleimani,” Al Jazeera reported last week. “US and Israeli flags were strewn on the ground, with people trampling them.”

By setting the statue on fire, the Iranian dissidents have shown better moral judgement than the U.S. mainstream media and leading Democrats, who vehemently attacked President Trump for killing the terrorist operative who had the blood of American soldiers on his hands.

The Biden White House continues to display the same bad judgement as it tries to appease and coax the Mullahs into restoring the Obama-era nuclear deal. As Biden’s negotiators hold talks with the Iranians in Austria, Tehran displayed its advanced ballistic missiles capable of carrying nuclear warheads. “Iran displayed three ballistic missiles at an outdoor prayer esplanade in central Tehran on Friday as talks in Vienna aimed at reviving Tehran’s nuclear deal with world powers flounder,” the Associated Press reported Friday.

The raw footage of Soleimani’s statue of fire

I don’t understand how they can set a statue on fire. Bronze, marble, granite, concrete, even plaster of Paris —- none of them can burn.

Did they make the statue out of wood? Fiberglas? Paper mache?

Doused in gasoline and diesel fuel.

Yeah, but it be char char.

Efforts to ‘honor’ Soleimani went up in smoke. Ha ha.

Pretty appropriate, if you think about it.

They were actually re-creating his final seconds.

The guy was a mass-murdering scumbag, and good on Trump for droning his ass.

Guy had lots of enemies, even in death not given any peace.
Funny actually

Boy a big ol’ grin just spread across my face the moment I saw that headline! Detested at home as well as abroad! A priceless moment!

I don’t know, maybe it’s the skeptic in me. Seems like a false flag to stir up nationalism…

All that remains is a former statue to honor a former commander that was formerly feared by his own people ferfuggs eggs.

Nothing to see here folks. Iranian mullahs build a statue of Soleimani to “honor” the man and then the Iranian mullahs have the statue burned to drum up more anti-United States propaganda.

My question is, was the construction of the statue a violation of islamic principles as moslems seem to be very sensitive over the depictions of humans especially in terms of “idol worship” and generally forbid the depiction of humans across the board?

IIRC only depictions of Allah or Mohammed are expressly forbidden. Of course, there’s a trickle-down effect culturally, as Islamic art in general focuses on geometric forms and calligraphy.

Caulk up another win for Trump. He got it exactly right.