Inflation Went Up 7% in December From a Year Earlier, Fastest Pace Since 1982

Inflation Went Up 7% in December From a Year Earlier, Fastest Pace Since 1982

Wake up, Federal Reserve. This inflation is NOT transitory. 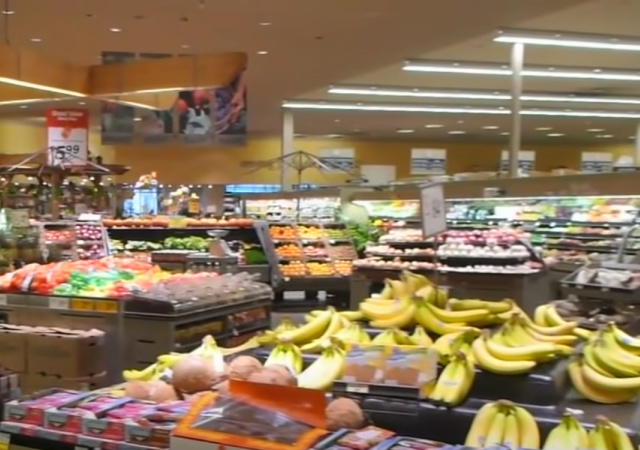 If anyone still uses the word transitory to describe inflation I will scream.

The Consumer Price Index (CPI) including food and energy went up 7% in December from a year earlier. It’s the fastest pace since 1982 when the CPI hit 7.1%

The core prices, which do not include food and energy, hit 5.5% in December from the previous December. That is also the biggest 12-month increase since 1991. 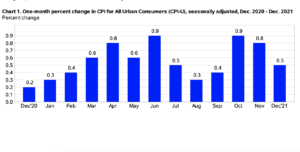 More good news: The energy index went down 0.4% in December after it went up 3.5% in November.

Bad news: The electricity index went up 0.3% like it did in November.

LOL Biden. I knew he would ignore the meaty part of the report:

In a statement following the data release, Biden touted the decline in month-over-month inflation – at 0.5%, it was down slightly from the 0.8% increase in November – as evidence of a “meaningful reduction in headline inflation” and demonstrative of falling food and gas prices.

“At the same time, this report underscores that we still have more work to do, with price increases still too high and squeezing family budgets,” the president said. “Inflation is a global challenge, appearing in virtually every developed nation as it emerges from the pandemic economic slump. America is fortunate that we have one of the fastest-growing economies.”

The eye-popping reading – which marked the seventh consecutive month the gauge has been above 5% – will likely amp up pressure on the Federal Reserve to begin hiking interest rates as soon as March in order to combat the recent price surge. Hiking interest rates tends to create higher rates on consumers and business loans, which slows the economy by forcing them to cut back on spending.

The CPI report waters down any positives in the dismal December jobs report. Yay wages rose 4.7% in December! But….inflation went up 7%:

Inflation has been eating into otherwise strong wage gains for workers. However, real average hourly earnings posted a small 0.1% increase for the month, as the 0.6% total gain outweighed the 0.5% CPI headline increase. On a year-over-year basis, real earnings declined 2.4%, according to BLS calculations.

Staffing is still a problem with companies, which is one reason why wages have gone up. Companies want to entice workers not only to take their jobs but also to stay.

However, the rise in prices means some places did not make a profit in 2020:

John Merritt, vice president of Elaine Bell Catering in Napa, Calif., said staffing was an immediate issue when demand for weddings and other big events came surging back last June. The company raised wages 50% in a bid to retain workers and hire new ones, but still had to rely on the services of temp agencies. Due to increased labor costs—along with soaring prices for meat, cheese and wheat-based products—the company didn’t make a profit last year, he said.

“People frequently say [restaurant and catering workers] are low-price people. Well, our base pay is now $30 an hour for wait staff and we still can’t fill positions,” he said. “This is going to be an ongoing problem. If we want to have the quality staff for the kinds of events that we do, we know we need to pay for it or we aren’t going to get them.”

The caterer has raised prices for the coming year by 25% to 35% from pre-pandemic rates. So far, customers are accepting the increases. “We’ve never raised prices that much from one year to the next. But we’ve never had cost increases like this either,” said Mr. Merritt.

You need to make a profit in order to stay in business. (I’m saying that for the socialists.)

As if we need another reason to END THE FED. The Federal Reserve has not raised interest rates because this inflation is TOTES TRANSITORY. Yeah, it’s not, and looks like it’s here to stay for a while:

Fed officials are watching the inflation data closely and are widely expected to raise interest rates this year in an effort combat increasing prices and as the jobs picture approaches full employment. Though the central bank uses the personal consumption expenditures price index as its primary inflation measure, policymakers take in a wide range of information in making decisions.

“This morning’s CPI read really only solidifies what we already know: Consumer wallets are feeling pricing pressures and in turn the Fed has signaled a more hawkish approach. But the question remains if the Fed will pick up the pace given inflation is seemingly here to stay, at least in the medium-term,” said Mike Loewengart, managing director for investment strategy at E-Trade. “With Covid cases continuing to rise, the impact on the supply chain and labor shortages could persist, which only fuels higher prices.”

Yeah, it sucks that our ability to earn interest is heavily influenced by the Federal Reserve. Gross.

But if it IS real, it’s good for the economy, independent fact-checkers say.

In case you were not around for the 1970s, Inflation is a depressing, soul sucking Cancer on the economy. It means you will work harder and harder and fall farther and farther behind.

And, it is going to get worse, before it gets better.

I think that government inflation numbers are BS, I must be buying the wrong things, because I am paying far more than 7%.

Inflation is a tax that hits the retired folks hard.

7% of my savings spanning 50+ years has been vaporized. I can’t get those years back nor its value. The very rich and the poor are taken care of and that wins elections.

Don’t worry, Inflation is transitory, but alas, so is life.

How else can “we” win the war on obesity?

I don’t care about the numbers being released. My own pocketbook is being squeezed real hard. My costs are way up, and my income is not.

Brandon claims that energy costs are down? I paid $4.33 for gas last week. Ouch!!

They say transitory but I expect it’s new normal as long as Democrats are in charge.

What they say and what they know are two different things. People like Brandon, AOC, and Spud Stelter are dumb enough to get high on their own lie supply. I don’t think the Fed is, at least not yet.

It has to be a coincidence that it was 40 yrs ago and Puddin Pants Liden has been in DC for 48 yrs.