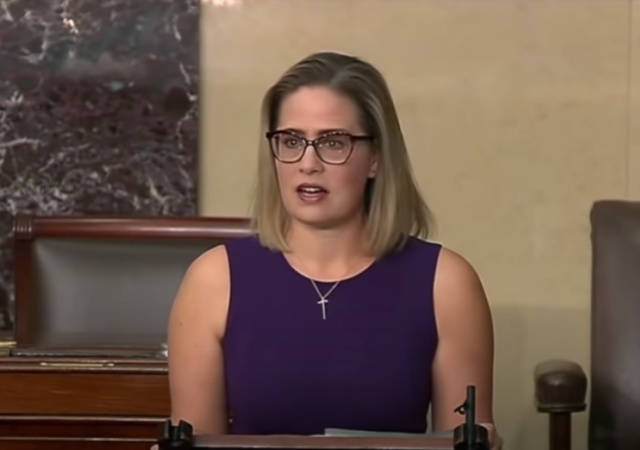 The Democratic Party of Arizona has voted to formally censure Senator Kyrsten Sinema because she didn’t go along with their plan to suspend the filibuster and push through their ‘voter reform’ package.

Democrats love Republican ‘mavericks’ from Arizona. Democrat mavericks, not so much.

Kyrsten Sinema was censured by the Arizona Democratic Party on Saturday morning, after the senator’s longstanding opposition to modifying Senate rules to pass voting rights bills culminated in the legislation stalling in Congress.

The Arizona Democrat has received substantial criticism for her position against creating a carveout in the filibuster for voting rights, along with fellow centrist Democrat Sen. Joe Manchin (W.Va.). A number of top donors threatened last week to stop funding Sinema if she didn’t reevaluate her stance, saying voting rights passage was “life or death important.”

Intra-party opposition to Sinema’s position reached a tipping point this month when she delivered a speech in which she firmly stated that she would not support the filibuster reforms for voting legislation, claiming it would make worse the “disease of division infecting our country.” The criticism within the Democratic party was widespread and immediate, with Rep. Ruben Gallego (D-Ariz.) calling Sinema out by name in a speech on the House floor directly after.

The Arizona Democratic Party’s Executive Board held a meeting on Saturday morning to discuss action against the senator, and ultimately the board formally censured Sinema “as a result of her failure to do whatever it takes to ensure the health of our democracy.”

You may recall that back in 2019, Democrats couldn’t bring themselves to censure Rep. Ilhan Omar over anti-Semitic remarks, opting instead to pass a watered down resolution against “hate.”

For the Arizona Democrats, standing in the way as the party tries to take over elections at the federal level is a much bigger deal.

Some media outlets are hyping a report that donors are deserting Sinema, but only one of them appears to live in Arizona.

Only one out of a group of 70 Democratic donors who signed a letter threatening to cut off Sen. Kyrsten Sinema (D., Ariz.) over her refusal to kill the filibuster lives in Arizona, according to a Washington Free Beacon investigation.

Politico reported on Thursday that a group of 70 Democratic donors wrote to Sinema saying it would end all spending for Sinema unless she went along with President Joe Biden and Senate Majority Leader Chuck Schumer’s (D., N.Y.) scheme to end the filibuster so that their party can pass federal election reform bills.

The problem: Only 19 of the individuals who signed the letter to Sinema have itemized donations to her campaign, according to the Federal Election Commission. Of the 19 signatories who donated to Sinema, only 6 gave the maximum $5,400 allowed by federal law. None of those max donors lived in Arizona. The single Arizona signatory who donated gave just $250.

Democrats don’t seem to realize that they need Sinema more than she needs them.

She should switch parties.

She should be the next GOP Speaker – that is, if milquetoast McCarthy is the other oprion.

You want another McCain? Because that is exactly what you would have.

Sinema – and Kelly first – both need to be beaten by conservatives. Neither is our friend. Nor is Manchin.

Stop bashing McCain. He FINALLY repented for his corruption and treason – by dying.

Now, if Pelosi, McConnell and Biden will do the same….

But yeah, we could use more.

Why would she do that? And why would we want her in the GOP? She’s a Democrat. She votes with Democrats on just about everything. She even voted for the election-stealing bill. She just doesn’t want to end the filibuster, because she’s looking to the next time the Rs get a majority and the Ds need it.

The rest of the Ds aren’t worried about that, because they figure that if the bill were to pass they would never lose another election.

I admire your persistence, Mulhouse, in the face of the obdurate idiocy on these comments.

There are some really warped commenters. You school them, but I do not think they will ever get passing grades.

That just makes her many times smarter than most communists. Still not a very high bar.

Speaking as an AZ voter, keep up the good work, Dims!

I guess stalking Senator Sinema into the bathroom stall didn’t work out as well as hoped. I suspect she will take this censure as a badge of honor and parlay it into something bigger and better.

The blatant lying is what does me. Censured for “her failure to do whatever it takes to ensure the health of our democracy” when her actions did far more to protect it than the people censuring her, by stopping them from directly attacking it.

Still, they’re right on one thing. I agree that “voting rights passage was “life or death important.”” as had it passed half the country would’ve been further disenfranchised. That wouldn’t end well.

The democrats don’t have a monopoly on corruption: the GOPe is right in there with them.

The GOPe can no longer do the ‘big lie’, but they’re part of the organized crime ring we used to call the US Government.

Well if your party calls our Constitutional Republic …. a Democracy …

Well, it is. Constitutional Republics are a form of democracy.

Sorry. It was. Back when voting fraud was investigated and prosecuted.

No, democracy is nothing more than mob rule which is why the low-IQ communists support it.

They work hard at the word games.

We lost that game when we gave into the ‘red/blue’ states (where the left relegated conservative states to commie red and took the true blue for themselves.

Note – they didn’t kick her out of the party.

Her, Manchin, Gabbard – the only demorats worth the air they breathe.

What does “kicking her out of the party” mean? How could they do that, if they wanted to? Remember this is the AZ party, not the D senate caucus. The senate caucus has not taken any action against her, because they need her. The AZ party doesn’t like her, but can’t do anything to her.

I think she (and possibly Manchin) is going to switch parties. This is about to get interesting.

better if they go independent. Would love a viable independent party. Would keep more politicians on their toes.

No way. Switch to the party of Mconnell and Mcarthy? Why embarrass herself?

Maybe an independent, but run to the swamp of the GOPe and blow all your credibilty?

Imagine the very NERVE of her. Serving the desires of her constituents, and not the party.

/or is that how dare her?

So the whole Democrat party of Arizona has gone over to Marxism, good to know.

Same everywhere. The ‘democrat party’ is synoymous with fascism. The Nike logo us their swastika.

You nailed it that time.

Baseball is dead at the moment, so how about a Congressional trade? Kyrsten Sinema for Liz Cheney. Heck, throw in Adam Kinzinger and a RINO to be named later as well.

Kinzinger? He’s been ‘retired’ and will live out his life in the GOPe ‘old-age home’ alongside Flake and Corker. Cheney will soon join him.

If Sinema is smart (and she seems VERY smart) she’ll stick to her guns and either become a leader in the ‘new’ democrat party or become an independent.

Given that EVERY SINGLE DEMOCRAT is surrounded by the stench of corruption and treason, i think Sinema is going to have a lot of choices. So is Manchin. So is Tulsi Gabbard.

The political positions of those three are, overall, just a hair’s breadth from Bernie. Don’t let this one vote blind you.

I’m not looking for them to be with us – I know they’re liberals. But they appear to be uncorrupted. And we know Sanders was bought off by Clinton long ago.

The Secret of Bernie’s Millions: How did he amass three houses and a net worth approaching at least $2 million? The surprisingly conventional middle-class climbing of a radical-sounding socialist.
https://www.politico.com/magazine/story/2019/05/24/bernie-sanders-millionaires-226982/

Hope her constituents, as well as those of Manchin, deliver the state Democrat office holders and hopefuls a royal butt kicking this November.

Isn’t it funny that when they want an abomination it’s a “reform” ?

The power of the state party executive committee is very limited.

The question is whether someone will be recruited to run against her in the next Arizona Senate Primary.

As much as I dislike McCain, as a AZ resident I understand why he was what he was: there’s just to much purple in AZ to really be a conservative and he needed to keep getting elected to maintain power and grift (like they all do).

That said, AZ is shifting more and more blue, what with it being a major source of disaffected Californians who still vote the same way, so maybe this will work.

But why do you think that is?

“Some media outlets are hyping a report that donors are deserting Sinema, but only one of them appears to live in Arizona.”

Curious. Is it possible that their money was the only way she got elected in Arizona in the first place?

Wear any condemnation from the commies proudly, Sinema. You and Manchin are helping to save this country…….for now.

They should just drop the pathetic veil and call this what it is: Censorship, not Censureship.