Jussie Smollett has become the poster child for hate hoaxes, but Jussie is just the latest in a long line of hate fakery. 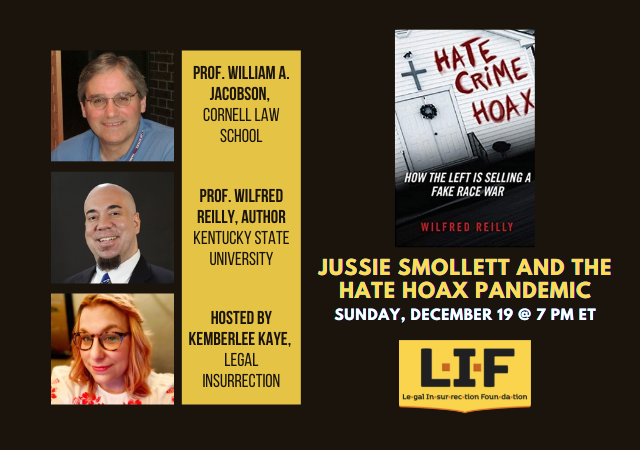 Jussie Smollet is the poster child for hate crime hoaxes. A giant who “almost” pulled off the improbable: Convincing ‘merica that MAGA bullies were running through the streets of Chicago (yes, Chicago) in the middle of the night and attacked Jussie and threatened him with a noose.

It takes a certain someone special to think that would fly. But fly it did, for months as the media and politicians fell over themselves about how the attack on Jussie was time for another racial reckoning, a moment when we contronted the white supremacist Trump supporters making Chicago unsafe in freezing weather in the middle of the night.

Slowly, but surely, the truth seeped out. It was a hoax. It never happened. Jussie put people up to it. He told his tale to the jury and they convicted him on 5 of 6 counts of making false statements to the police.

In honor of Jussie, on December 19, 2021, we assembled a Star Spangled panel to talk about Jussie Smollett and The Hate Hoax Pandemic 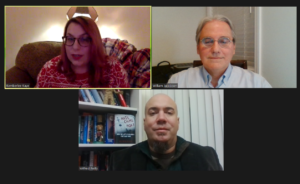 In my presentation, I presented slides that are shown on the screen, walking viewers through the history of Legal Insurrection covering Hoaxes, including these two shown on one of the slides: 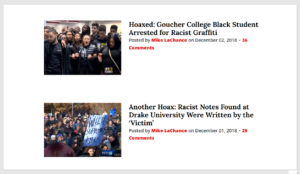 Prof. Reilly talked about his methodology and database for tracking hoaxes, and attempted to answer the question: Why did they do it? Will Prof. Reilly have a follow up to the book? Hah, you’ll have to watch the video to find out.

Kemberlee screened and then asked audience questions during a fairly long Q&A.

Unlike some prior events, there is no highlight reel. The whole thing is just too damn good to clip.

I find it odd that the outrageous and quite unbelievable stories are the ones the Left piles on and hypes like crazy, which most sane people view as odd behavior as each of the overblown frauds collapse under the weight of their own falsehoods. We just watch them go “boom, boom, boom, boom…” and the Left never thinks even for a second “Hey, wait. This is too good to be true. We should check.”

The ‘lefties’ have skin in the game. Sick skin, but it’s all they have.

The ‘lefties’ have skin in the game. Sick skin, but it’s all they have.

“Political correctness is communist propaganda writ small. In my study of communist societies, I came to the conclusion that the purpose of communist propaganda was not to persuade or convince, not to inform, but to humiliate; and therefore, the less it corresponded to reality the better. When people are forced to remain silent when they are being told the most obvious lies, or even worse when they are forced to repeat the lies themselves, they lose once and for all their sense of probity. To assent to obvious lies is in some small way to become evil oneself. One’s standing to resist anything is thus eroded, and even destroyed. A society of emasculated liars is easy to control. I think if you examine political correctness, it has the same effect and is intended to.”
― Theodore Dalrymple

I guess the government has no plans to intervene in this pandemic. Just let it run it’s course until there’s herd immunity.

and believe me, the crazy left whities swallow it hook, line and sinker

You will never see anything so brave as a liberal fighting nonexistent enemies.